"I've really been enjoying reading the Korbel Classics series, but Some Men's Dreams is head and tale above all its predecessors. It was an emotional roller coaster of a story. There are lots of heavy subjects to be dealt with here." Valeen, Goodreads 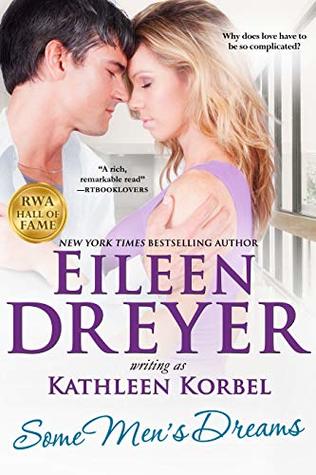 SHE HAS NO TIME FOR LOVE

Dr. Gen Kendall has paid too high a price to let anything get in the way of her dream. In one month she’ll be a full-fledged doctor. She just has to impress her chief of staff, Dr. Jack O’Neill. She impresses him, all right. With one swing of a softball bat she puts him in his own hospital and changes both of their lives forever.

HE HAS NO TASTE FOR LOVE

A widower with a 12-year-old daughter, Jack hopes this move to Chicago will signal a new life for them both. He doesn’t plan on finding himself literally at the feet of one of the most compelling women he’s ever known. He certainly doesn’t expect her to turn his life upside down when she recognizes something in his daughter that could well break his heart. Is love enough to see them through, especially when it means that not just Jack but Gen must face the ghosts of their pasts to save his little girl?

Dr. Genevieve Kendall met the new chief of pediatric critical care at the house staff softball game. More to the point, she knocked him out.

Literally.
Dr. John Parker O’Neill, the handsome new wunderkind of medicine, who until very recently had made his name in Boston by effecting near-miraculous saves of desperately ill children, had this day decided to introduce himself to Chicago’s Memorial Medical Center by pitching for the attending-physicians’ team that always challenged the residents on the field of battle the Saturday after Memorial Day.

He had so far pitched as near-perfect a game as anybody would have expected him to. By the time Gen showed up late, because of a surprise admission she’d had to finish, he’d helped the attendings trounce the hapless residents by a score of fifteen to one. The residents promptly sent Gen in to pinch hit for their own sadly overmatched pitcher.

For Dr. O’Neill’s part, he looked unwrinkled and unflustered, standing out on the pitcher’s mound in perfectly pressed khaki shorts and a peach Izod shirt, his hawk-like features tanned and smiling, his gray-fingered black hair tousled just slightly in the humid breeze of an early Chicago summer afternoon.

Gen, on the other hand, looked as if she’d just pulled a thirty-six-hour shift, which, in fact, she had. Stretching the kinks from a sleep-deprived body still encased in wrinkled, Snoopy-decorated scrubs, she tossed her thick chestnut braid over her shoulder and choked up on the softball bat.

“Come on, weenie pitcher!” she taunted, much to everyone’s surprise. “See if you can reach the plate!”

Dr. O’Neill’s smile, a thing of controlled beauty, widened a notch. He tossed the thick, scuffed ball a couple of times into his oiled and gleaming glove and eyed his prey as if she were an amusing child.

His first pitch was wide. Gen waited until the ball safely thunked into the glove behind her to give her bat a few more practice swings.

“Big-time doctor can’t even find the strike zone,” she taunted, which drew howls of outrage from the infielders and another enigmatic smile from her foe.

His next pitch was as sweet a strike as is allowed in slow-pitch softball. Gen watched it arc into the afternoon sun and smiled with delight. She was winding up even before the ball reached its apex. Feet planted, left shoulder slightly forward, her whole body tensed for contact. The ball dropped toward her, and she slammed into it as if it were the head of the last surgeon who had called her an idiot.

The crack of a solid hit could be heard into the next diamond. The ball shot straight back the way it had come. Gen never even got the chance to drop her bat or turn toward first base. She recognized imminent disaster before anyone else.

Even Dr. O’Neill.
“Oh, shit,” was all Gen got to say before the ball, with unerring accuracy, slammed into Dr. O’Neill’s forehead and dropped him like a rock.

2018 sees Eileen enjoying critical acclaim for her foray into historical romance, the Drake’s Rakes series, which Eileen labels as Regency Romantic Adventure that follows a group of Regency aristocrats who are willing to sacrifice everything to keep their country safe. She is also working on her first non­fiction book, TRAVELS WITH DAVE, about a journey she's been taking with a friend's ashes.

A retired trauma nurse, Eileen lives in her native St. Louis with her husband, children, and large and noisy Irish family, of which she is the reluctant matriarch. She has animals but refuses to subject them to the limelight.

I love the cover and excerpt! This looks like an awesome book and series.

The cover is nice and I enjoyed the excerpt. Thanks for hosting.

Thank you so much, everybody. I truly hope you like my Kendalls. I'm very fond of them all. Let me know. And I'll tell Kim Killion you like her cover. She does all my covers, and I love them.
Eileen

I see this is a series. On my TBR thanks to the premise of this story. Thanks for hosting.

Are you able to read or write when it's noisy or do you need peace and quiet as I do?

Good luck with the novel.