"Holly Hell what a book! This is a phenomenally well written and thought out book. It was such a joy to read. It had this wonderful flow to it and I had a hard nearly imposable to put down. " Kim, Goodreads 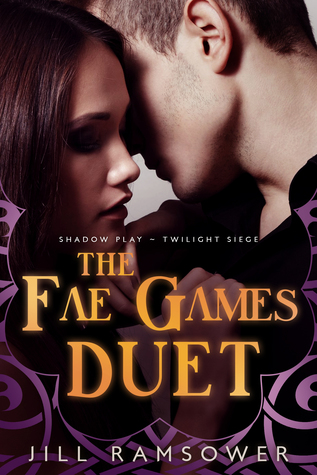 When Rebecca Peterson walks away from everything she knows to follow her dreams in Ireland, she never expects to be thrown into a world of vicious Fae and deadly secrets. On the dreary streets of Belfast, her terrifying nightmares are rekindled, and this time they aren’t confined to her imagination. Complicating her life further, Becca crosses paths with two mysterious strangers—both alluring in different ways, but are either of them to be trusted?

Her journey takes her deep into the treacherous Shadow Lands, where both her knowledge and courage will be tested. Navigating this new landscape of deceit and manipulation is paramount if she is to stop hordes of blood-thirsty Faeries from invading Earth. With time running out, will her limited training be enough to take on a centuries old enemy hell-bent on death and destruction? To keep those she loves safe, Becca is willing to risk it all.

In this captivating duet, Jill Ramsower takes her readers from the streets of Belfast on a harrowing journey to the most dangerous corners of Faery, where fear is a lethal enemy and trust is a luxury few can afford.

I’d say my favorite part of reading/writing in the fantasy realm is the mystery and intrigue that comes with a world of infinite possibilities. Unfortunately, that also means an author can rely heavily on far-fetched plot devices when writing fantasy and inadvertently ruin a good story. The imagination can only be stretched so far—readers need to have a certain degree plausible logic upon which to anchor themselves. Push the fantasy aspect too far and a story can quickly become either cheesy or downright absurd.

A plot device, in case you were wondering, is a technique or narrative used to move the plot forward. Examples of this are a red herring that distracts the audience, or some object that the main character must locate. When the plot device used is contrived or arbitrary it can cause the reader to lose belief in the storyline. The fantasy genre enables an author to be creative in her use of plot devices and push the limits of a reader’s imagination. This can be a great way to keep a reader guessing and add intrigue to a novel; however, if too far-fetched, the plot device may prevent the reader from buying into the story. Authors must walk a fine line.

Just because magic exists in the fantasy world doesn’t mean an author can become lazy and rely on the use of the paranormal to explain away holes in the story. Say an author needs to get her character from point A to point B, but doing so would take the character outside of his established behavioral norms. The author could throw in a magical spell that makes the character do what he did and consider the problem solved. Unfortunately, the reader will see right through that patch-job if the use of that particular magic was not a well-established part of the story. The same goes when a character ‘just happens’ to cross paths with another character. If the situation would be highly fortuitous/unlikely, there needs to be sound reasoning for its inclusion or it will bring the reader to doubt the validity of the story.

Magic and the paranormal can be great additions to a story, but they shouldn’t be relied upon as a crutch in the writing process. Characters must continue to act consistent with their past behaviors and elements of the fantastical must be clearly established. The emergence of a previously undiscovered magical power that conveniently resolves all the conflict at the end of a story would ruin a book. Fantasy elements should be used to enhance what is already a fundamentally solid storyline, not patch plot holes or act as support for lazy writing.

About the author:
Jill is a Texan, born and raised. She manages the hectic social calendars for her three active children and occasionally spends an evening with her dashing husband. Aside from being an author and a mom, she’s an attorney, travel junkie, and voracious reader.

Thanks for sharing my books!

Looking forward to reading The Fae Games Duet! Thank you