In the great tradition of The Name of the Rose, the Brother Cadfael mysteries and Grantchester, Life Without Shoes confronts a modern-day monastic with a horrifying crime. 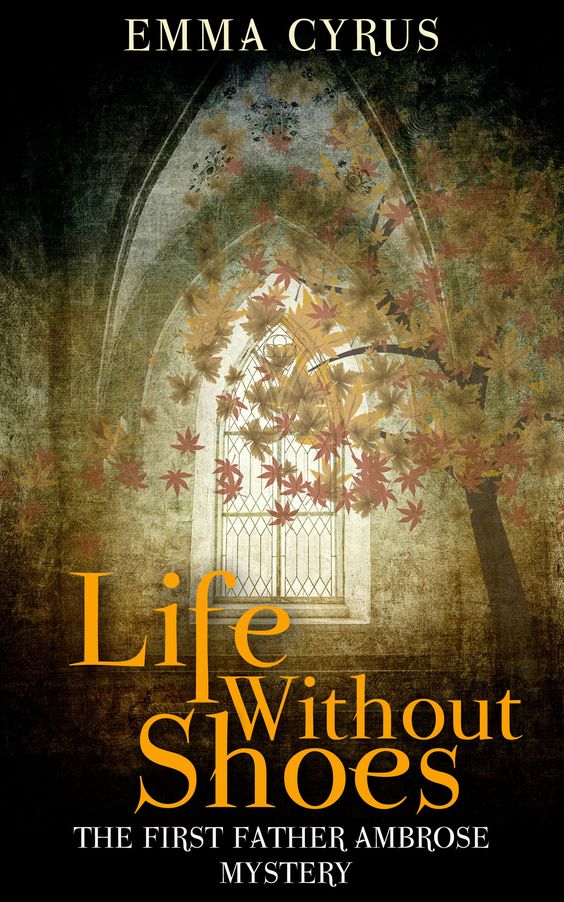 In the great tradition of The Name of the Rose, the Brother Cadfael mysteries and Grantchester, Life Without Shoes confronts a modern-day monastic with a horrifying crime.

Father Ambrose has found a simple life leading a spiritual community in Northern California. He spends his days on guiding the farming and teaching meditation. Then, someone dumps a body in one of their orchards.

Now, the violence of the modern world has come crashing through the gates. He wants Sheriff Charlie Cormley to believe the body has nothing to do with them, but it’s not that easy. He must take on the role of sleuth to protect his community and find the truth.

He finds himself moving out into the world in ways he never imagined, and life at New Life will never be the same.

I’m working on the next book in the Father Ambrose series, so I’ve been paying attention to how some of my favorite authors handle the continuation of character and setting. Some readers will have great familiarity and some readers will be reading for the first time. I’ve been looking at Ann Cleeves’ Shetland series, Laurie R. King’s Mary Russell and Sherlock Holmes series and Elizabeth George’s Inspector Lynley series.

What I’m observing is that all three authors have a clear sense of how their characters are growing and changing over time, so that the series is composed of one long character arc with individual mystery stories. This idea has prompted me to consider what Cleeves has done. Shetland is only eight titles and the series is now concluded. Right now, I’m thinking I’ll structure the Father Ambrose series as five titles only. It allows me to look ahead and see the character arc he is following.

Then, I’ve been looking at a few literary fiction bestseller titles to understand what is currently appealing to a general readership and how it differs from a mystery readership. I’ve read The Tattooist of Auschwitz by Heather Morris; My Absolute Darling by Gabriel Tallent; and The Reluctant Fundamentalist by Mohsin Hamid.

All three are startling books in very different ways. What they have in common is a great “what happens next” momentum. In that respect, they appealed to me as a mystery reader, where “whodunnit” carries the plot forward. As I’ve mentioned before, some of the best writing advice I’ve received has to do with engaging readers’ emotions. These three books convey a sense of menace that is palpable. The off-stage presence of evil makes us want to hurry on to make sure our sympathetic characters are okay. It’s a tension I aspire to as a mystery writer.

Finally, I’ve been studying audiobooks in preparation for making an audio edition of Life Without Shoes. I’ve listened to a few literary fiction bestsellers and one mystery narration, The Wrong Side of Goodbye by Michael Connelly.

I’m not naturally an audiobook person, so I was surprised to find that listening and reading are two very different experiences. While some people can apparently listen while doing other things, I found I can’t—my mind skitters off away from the book and I’ve missed a chunk of the story. So, I need to only listen.

Connelly’s audiobook was the most professionally produced, with the actor playing Harry Bosch on Prime Video (Titus Welliver) doing the narration. I found it a seamless listening experience. The literary fictions, however, were much slower going. The least little awkwardness on the part of the narrator translated into a dragging or confusing storyline. In most cases, the narrator performs all the voices, and a poor interpretation of secondary voices makes dialogue difficult to follow.

I listened to the first several chapters of three books (The Girl Who Chased the Moon by Sarah Addison Allen; The Death of Santini by Pat Conroy; and At the Water’s Edge by Sara Gruen) and returned them to the library. In different ways, they were all too annoying to continue. I’m curious about how I’d read them, but not enough so to make me try. I’ve started The Third Angel by Alice Hoffmann and will give it my best shot. I’ve got a few more audiobooks on hold, including Michael Connelly’s latest, Dark Sacred Night, again with Titus Welliver.

In eBook format, I’ve got ahead of me Ruth Ware’s The Death of Mrs. Westaway (because of its stellar reviews); Robert Galbraith’s Lethal White (because of J.K. Rowling’s transition from Harry Potter to detective fiction); and Linda Castillo’s Sworn to Silence (because it has character and setting similarities to my books).

Every time I start reading (or listening to) a new book, I go in with the intention to flesh out and sharpen my writing skills. I may even enjoy it in the process – that’s a bonus!

TOUR SCHEDULE
on sale -  0.99 for a limited time
Goodreads ** Amazon

About the author:
Emma was born in West Virginia and lived there until she was in high school, when her family moved to Pittsburgh. After high school, she went to Boston to go to college. She worked in different small and startup businesses until she moved into a yoga community in Pennsylvania. There, she’s worked on various projects and taught yoga.

She started the Father Ambrose series as a way of pulling together her love of good mystery stories with her deepening appreciation of the real-life magic and mystery of inner work. Father Ambrose has many characteristics in common with the leaders of her community, but his voice is probably hers, or at least what she thinks her voice would be, if she were living inside the parameters of his life.

She’s discovering the compelling nature of writing fiction and the surprises of working with what other writers have called their ‘muse.’ The creative process seems to have its own timetable and logic. The best results seem to come from stilling her own personal voice and allowing that ‘muse’ to speak.

I am enjoying these tours and finding all the terrific books my family is enjoying reading. Thanks for bringing them to us and keep up the good work.

What a intriguing book plot.

Thanks for your kind thoughts, all. And thank you, Mythical Books, for hosting me today.
Emma Cyrus

This sounds awesome, can't wait to check this out. Thanks for sharing :)

Cool book,what inspired you to write it ?

Thanks, everyone, for your comments. Calvin, check out my other stops on the tour this week, where I address your question in a few different ways. If anyone would like more in-depth info, drop me a note at emma@emmacyrus.com.

thanks for hosting good luck on the book

Thanks for hosting. This sounds like a great book with a very beautiful cover. I look forward to reading this one.

Hi Wendy, All About Old Cars, and Debra. Nice to hear from you. Please be sure to read the longer excerpt on the Amazon page. And if you follow me on the other tour stops this week, I discuss different aspects of the book and my writing process. I'd love to hear from you at emma@emmacyrus.com, and you can sign up for my newsletter at www.emmacyrus.com.

Looking forward to reading The Father Ambrose Mystery's. Thank you

Thanks, Linda! I'd love to hear your take on the book after you're done. You can contact me here: http://www.emmacyrus.com/contact-emma/.
Thanks!

I love the way the light shines through the window, on the cover. I have the same problem with audio books. I find I really have to concentrate on the narrator or my mind tends to wander. For this reason, I prefer print books.

In response to your statement, "... What they have in common is a great “what happens next” momentum. In that respect, they appealed to me as a mystery reader, where “whodunnit” carries the plot forward. As I’ve mentioned before, some of the best writing advice I’ve received has to do with engaging readers’ emotions. These three books convey a sense of menace that is palpable. The off-stage presence of evil makes us want to hurry on to make sure our sympathetic characters are okay."

I just read The Tattooist of Auschwitz as well, and that is exactly what the author accomplished. I could not put that book down and was constantly concerned for the main characters. I look forward to reading your novel.

I love a good mystery for a cold winter's night.

Right now, I'm surveying my subscribers about the potential covers for my second book. Email me (emma@emmacyrus.com) if you'd like to vote!