Dedication: I dedicate this book to those who are alone in a crowd. To those who are desperately trying to right a wrong they’ve done in the past. Sometimes taking a chance may seem crazy, but you’ll never know until you try. (Keri Kruspe) 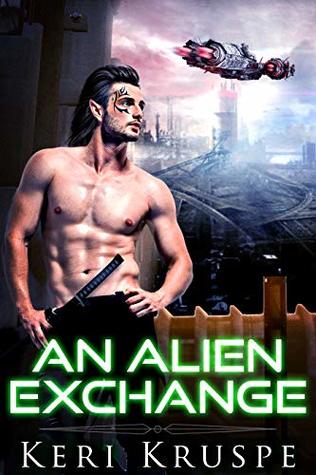 Aimee Gwiazdowski has a passion for Alien Abduction romance stories. She vicariously lives through the heroines of her books to escape her lonely, loveless life. Until one morning, she wakes up in a strange, white room where an alluring voice invites her to the “Exchange” to find love and adventure in another world. Did she dare believe it? Could she leave everything behind and take a chance to become one of those heroines who finds true love among the stars?

Exiled Prince Qayyum E’etu and commander of the space vessel StarChance has a mission—transport the human women to the Exchange along with an offer he can’t refuse: find evidence against rumored human trafficking connected with the Exchange. If he can successfully bring the traitors back to Zerin for justice, it would give him a chance to return home. How was he supposed to know that meeting a human woman would put everything he was working for in jeopardy?

As unforeseen evil slowly brews discord within the galaxy, it works to tear Aimee and Qay further apart. If they don’t learn to overcome their fears and trust the love they have for each other, the coming cataclysm will devastate not only Zerin, but Earth as well.

An Alien Exchange is the first book in a sci-fi romance that features intergalactic action, engrossing plots, and courageous individuals. If you like fast-paced action, raw emotions, and sexy aliens, you’ll love this new space adventure.

Star struck, she gawked at him with her mouth open. Any preconceived notion she had about masculine beauty changed. His overt, exceptional maleness matched the images she’s conjured while reading her sci-fi romances.

His skin was a light russet brown nestled by a pearlescent sheen. Hair black as midnight layered with strands of cobalt blue reflected when he moved. A subtle widow’s peak crowned a smooth, wide forehead. A tiny intricate braid at his right temple ended in a long curl at the front of his crotch, framing his manhood. Pulled hair bared ears larger than a human’s, the tips ending in a slight point. A small gold hoop pierced the left tip, twinkling as it danced and teased in the light. Aimee’s lips moistened as she envisioned savoring the combination of warm flesh and cool steel.

She took in his matching black eyebrows. They rose up and down like an upside down V over his almond-shaped eyes framed by a set of thick lashes. Instead of black, his pupils were a dark iridescent green, oval-shaped and surrounded by a ring of dual color. The first ring was a dark emerald with the outer ring a contrasting shade of lighter green. His full lips parted in a patronizing smile and displayed small fangs where human eyeteeth were.

He pulled his arms away from his chest and she noticed he had three fingers on each hand instead of four. Those fingers were long and thick, one digit not any shorter or smaller than another— his thumbs no different than a human.

She sighed, trying to picture how many toes he had.

“Satisfied?” His amused accented tone left no doubt he was making fun of her. “Believe in aliens now?”

About the author:
“Author of otherworldly romantic adventures”

A writer since the age of twelve, Keri Kruspe has always been fascinated with otherworldly stories that end with the dream of Happily Ever After.

A native Nevadan, Keri resides with her family in the wilds of Northwest Michigan where she enjoys the stark change in seasons and the pleasures each one brings. An avid reader, Keri loves an enjoyable bottle of red wine, a variety of delicious foods and watching action/adventure movies…usually at the same time. You can find her most days immersed in her fantasy world on her latest novel while foot tappin’ to classic rock. When not absorbed in her writing, Keri works alongside her husband in building their dream home or discovering intelligent life in America in their RV.

Why I wrote this book [written in the 1st person]
I was reading one of my favorite Sci-fi romances on my electronic reader after watching the latest’s news about computer hacking. It got me thinking…what if aliens hacked into my reading habits to find someone like me who liked alien romances. Wouldn’t that be a perfect way to find women who might be willing to leaving Earth to find love among the stars…

I envisioned Star Wars meets Pretty women. And that, they say, was that. My story “An Alien Exchange” was born.

Thank you for showcasing my debut novel on your blog! I appreciate the opportunity for An Alien Exchange to reach readers who enjoy a story about taking chances and owing up to mistakes made. Not to mention sexy aliens and steamy love play! I work a full-time job but I will try to jump in from time-to-time to answer any questions folks may have.

Thanks for hosting. This cover is interesting. Good luck with your novel.

The covers are awesome, I added all 3 books to my TBR. I can't wait to check them out. Thanks for sharing :)

the book sounds great thanks

Your welcome! I hope you get a chance to check it out.

Thanks for excerpt. Sounds interesting.

I hope you liked it!