Not even death can stop her. - This Time (Nadira Holden, Demon Hunter #1) by Azaaa Davis

"This is a great new author who introduced a great new series, both of which climbed very high on the list of my favourites. I highly recommend this book to all the lovers of well written urban fantasy."- Myriam, Goodreads 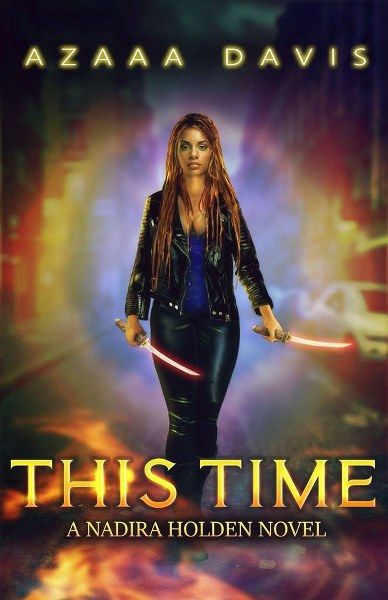 When demon hunting is outlawed, it's time to resurrect a legend.

Not even death can stop her.

Fearsome demon hunter Nadira has been torn from her next life and resurrected in present-day New York. The demons she once battled have made peace with humans. Or, so they claim. But brawls between demons and humans are becoming more frequent, and human leaders are disappearing.

Tasked by the shadowy organization that trained her, she must battle her own personal trauma and once again fight for the souls of mankind. Will Nadira remain a beacon of light to those fighting for humankind? Or will she lose her humanity to the darkness within?

“Curiosity won over prudence, and she glanced to the left. She took in the sight of two men; both dressed for a night out on the town and both very pale. One guy was older, early forties maybe, leaning against the building with his head tilted back, exposing his throat. He had on shiny black shoes, black slacks, and a stylish navy-blue button up shirt that was undone.

She noticed a ring on his finger and an expression on his face that was equally dazed and scared. The other guy was younger, maybe in his mid-twenties like her. He gave Nadira a scornful look, and she blushed in embarrassment at interrupting what seemed like a lovers’ tryst. She looked away.

It was none of her business what two people did at night. So what if it were two guys feeling each other up in a public place. So what if only one of them wore a wedding band. So what if one guy looked scared and the other guy looked aggressive. That slurping sound meant something intimate was going on that she did not need to see. Except . . . their lips weren’t bruised, and both of their pants were zipped up and belted.

Damn it. Of course she would stumble across a possible vampire feeding.”

About the author:
Azaaa Davis is a writer of urban fantasy novels.
She fell in love with reading as a high school freshman and continues to read, write, and draw today. Her background in social work helps her portray realistic characters in fantastic--and sometimes terrifying--situations. A New York native, Azaaa currently lives in New Hampshire with her husband and daughter.

She debuts with This Time, A Nadira Holden Novel, about demon hunters, family ties and the magic of love.
Azaaa is working diligently to finish writing more fantasy novels while raising her daughter. Her next book is expected to be released in early 2019. Thank you for showing an interest in her stories!

Thank you for sharing my novel THIS TIME with your readers! I'm happy to answer any questions. ☺

Wow! The cover is amazing and this sounds good!

Wow this book looks amazing and the cover is fab

I really enjoy reading about strong female leads so this is great. Thanks so much for writing the book.

Thank you, Lis and Areck0001, for your comments. I hope you enjoy Nadira's story! :-)
- Azaaa, author of This Time

Thank you, Lis and Areck0001, for your comments. Nadira is beautiful, troubled and tough. I hope you get a chance to read This Time.
- Azaaa, author of This Time

I like the cover and the story. This is one of my favorite genres.