... what could possibly go wrong? - The Ghost of Her Ex by Aletta Thorne

"Aletta Thorne has a wonderfully impish humour, which weaves effortlessly in and out of her beautiful prose, shedding smiles over a truly moving story. [...] I love this story. It's a good reminder that you are not done living until you are dead. And even then… :) " - Katherine, Goodreads 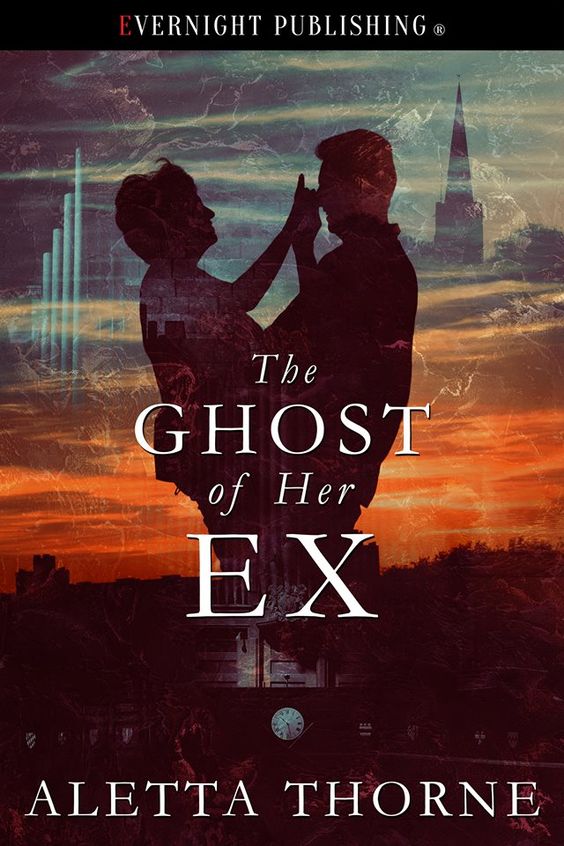 What happens when the ghost of your ex just can’t leave you alone?

Now that she’s traded in her old barn of a place for a tiny house in the hills, Emily’s ready for a new start.

So…you want to know what happens, do you?  Well, no spoilers, but it’s complicated.  In Emily Rauch’s case, the ghost of her ex has put her life on hold.  She’s in her early sixties, but that doesn’t mean she’s dead!  She’s smart, cynical, and she curses like a sailor.  She is lonely, though.  Emily’s daughter, Amy, is successfully launched, but she lives almost all the way across the country.  No grandchildren yet—and Amy’s just broken up with her boyfriend, so it looks like none are on the horizon.
Emily’s a classical musician, a church organist.  She’s finally retired from her teaching job, so she’s dived into her playing, practicing extra hard.  But in her pretty upstate New York town, almost everyone Em’s age is paired-up.  Besides, that ex-husband, Al, who left her when he realized he was gay, loves her still.  After all, they had a daughter together.  He can’t resist…looking in on Emily.  He was an architect, a successful one, and he wants to see how the tiny house she’s just built came out.  He misses his daughter.  He misses everything about his marriage to Emily—except the part about not being attracted to her anymore.  And—well, dead.  Love is a complex thing.  To which Emily would say, “Ah, fuckity fuck fuck fuck!”
When Emily sold the big, perfectly-restored Early American house she’d lived in with Al, she thought that his spirit wouldn’t follow her to the new place.  She was wrong.
And the truth is she doesn’t hate the company.  She still mourns Al’s death, despite the divorce.  But how do you bring someone home when your ex might be…watching?
That didn’t matter so much until something shifted in Emily.  She bumped into her old squeeze from music school, now divorced for the second time.  Then she started having embarrassingly vivid dreams about him.  Brad was a bad boy, the world’s worst boyfriend—but very talented in the sack and tons of fun on a date.  And a terrific musician himself.  He’s crazy interested in her, but she knows better…right?
And then, suddenly, there were other men around—one of whom is Emily’s boss, a widowed Episcopal priest. Father Chris is sunny and he bakes great pineapple upside down cake, but as Emily puts it he’s “made of fucking jingle bells.”  And let us not forget Santa Claus.  Once the chief of the local fire department, he’s now the village pot dealer, beloved even by the local cops, a man who will do absolutely anything for a friend…and his Land Rover is excellent at navigating the snowy winter during which this story takes place.
How does Emily end up with a happily ever after?  Well, as they say on Facebook, it’s complicated.  It involves ghosts—plural!  And pipe organs!  And one hilariously gone-wrong funeral.  And a giant blizzard. And her daughter, Amy, too. Read THE GHOST OF HER EX and find out!
TOUR SCHEDULE
Goodreads ** Amazon

About the author:
Aletta Thorne believes in ghosts. When she’s not making up ghost stories for grownups, she is a choral singer, a poet, and a DJ. But she’s happiest in front of a glowing screen, giving voice to whatever it was that got her two cats all riled up at three AM. Her house is quite seriously haunted—even scared the ghost investigator who came to check it out! After all, she lives just across the Hudson River from Sleepy Hollow. Aletta Thorne is also the author of The Chef and the Ghost of Bartholomew Addison Jenkins.

Hoorah! A novel about the love life of an older single woman. Note to authors: There are lots of us out here!

I loved your bio. I also enjoyed the post. I have cats that like to eat at 3;00 in the morning also. Being a DJ must be fun. (jozywails@gmail.com)

The blurb cracked me up. This sounds like a lot of fun!

good luck with the books it sounds interesting

I enjoyed the synopsis.

thank you for your giveaway

This sounds like it will be really funny. Thanks for sharing!

What writers have inspired you?

This one sounds unique and a bit of fun. Thanks for writing this novel. I'm excited to read this one.

Do you prefer e-books or print books?

When did you realize you wanted to be a writer?

How long does it usually take you to write a book?

What book(s) are you currently reading?

How did the cover come about?

What was the hardest thing about writing your latest book?

What do you think of trailers for books?

What advice would you give to aspiring writers?

Who is the greatest influence in your writing career?

Do you have a favorite series or characters in the book(s) you have written?

Good luck with your book. What's next on the agenda?