"I absolutely loved it and I can't wait to see what happens next. It's a prequel, so it's very short. I devoured it in one sitting, and I really enjoyed it. The characters were exactly what I hoped for them to be, and the story was refreshing and new. I can't wait to see what's in store for the rest of the series. " RadioactiveBookworm, Goodreads 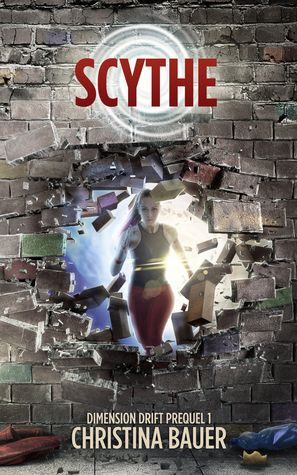 On second thought, judge away. Learning Squirrel is one step above attending class in a junkyard. But what do you expect? Everything’s made out of garbage these days. At least, I have my freelance work to keep Mom and me housed, clothed, and fed. How? I’m your regular high school science geek for hire, except my work manipulates space-time. The good news is that these gigs pay really well; the bad news is that the government likes to kill people like me. Whatever. I’m not worried; hiding from their detection systems is easy for me.

Then I screw up one of my illegal projects. Badly.

In fact, things go so sideways that my house slips into two-dimensional space-time. The shift only lasts for a few seconds, but that’s long enough to set off a dozen government alarms. If those goons track me down, Mom and I are as good as dead. Long story short, I need to pay someone off, hide the evidence, and keep us safe.

Unfortunately, that means asking the Scythe for help. He runs the local underground crime scene and has absolutely no conscience…Or at least, I’m pretty sure he doesn’t. It’s hard to think straight when a guy’s that hot in an ‘evil Mafioso kingpin’ kind of way. Most importantly, the Scythe is a crime lord who can conceal my slip-up with a few clicks on his minion’s computer keyboards. But the man has his price. In this case, the Scythe wants me to finish a certain dimensional prototype for him in twenty-four hours. I can do it, but it might mean Learning Squirrel High gets blown up in the process. Oh yes, and there’s also my new hot classmate who may or may not be an alien…and he says he’ll do anything to help me.

This job won’t be easy, but I’ve gotten out of worse scrapes. Maybe.

EXCERPT
Chapter One
Not long now.
Up ahead, a tiny concrete tower rises from the darkened hilltop. Guardhouse #83. I scan the gravel road before me. Everything is deserted, quiet, and perfect. Despite the chilly night air, a rush of excitement warms my limbs. Most days, I’m a teenage she-hermit who lives for my basement laboratory. But in this moment, I’m my best self: a science prodigy-for-hire whose inventions secure my family’s safety. And if a little thievery is involved? Well, that just makes me a lot badass.
In other words, time to steal for Mom and science.
Marching to the guardhouse, I stop before the intake window. There’s no need to announce myself; motion detectors will activate the auto-guard. Seconds later, a mechanical buzz sounds as florescent lights click on, revealing an animatronic woman sitting at a fake desk. Like most auto-guards, this one is less than perfect, what with her chipped plastic skin, frayed blue uniform, frizzed-out hair, and single functioning eye. Raising her head, she addresses me through the Plexiglas.
“You have reached guardhouse #83 for Reclamation Center Massachusetts-1,” she says. “The manufacture of new goods is reserved for the military, so we sort, clean, and refurbish old items from landfills.”
To kill time, I adjust the loose straps on my backpack. This auto-guard won’t interact with me until her welcome spiel is over. Sadly, animatronic speeches at Reclamation Center Massachusetts-1—also called RCM1—always take a while.
With jerky movements, the auto-guard gestures to the monitor embedded in the outer concrete wall. Here comes the slide show. Images appear on the screen, showing endless rows of long metal buildings stretching off to the horizon. “Since our founding in 2107, RCM1 has processed more than three million objects across two thousand warehouses. It is now 11:43 pm. How may I be of service?”
That’s my cue. All the blah-blah-blah is done.
“I need to check in for my shift,” I say.
Which is a total lie.
TOUR SCHEDULE
Goodreads ** Amazon ** Barnes&Noble ** iTunes ** Kobo

About the author:
Christina Bauer knows how to tell stories about kick-ass women. In her best selling Angelbound series, the heroine is a part-demon girl who loves to fight in Purgatory’s Arena and falls in love with a part-angel prince. This young adult best seller has driven more than 500,000 ebook downloads and 9,000 reviews on Goodreads and retailers. The first three books in the series are now available as audiobooks on Audible and iTunes.

Stalk Christina On Social Media – She Loves It!