the last thing you need is family trouble - Powder (The Lagotti Family, #3) by Leopold Borstinski

When a drug deal goes south, Mary Lou must fight to save her children. How far will she have to go to keep her family alive with Latino heroin traffickers and the East Coast mob holding her babies captive? 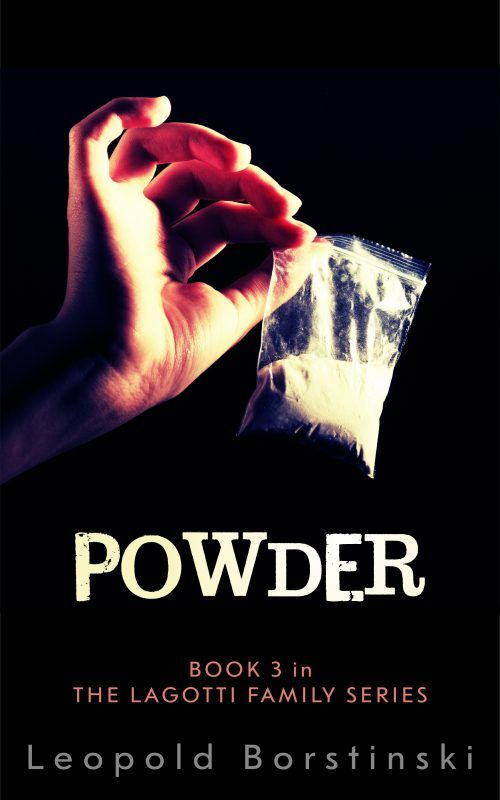 Owning a huge amount of money is useless if you can’t spend it. With the mob and the Feds on your tail, the last thing you need is family trouble. And there’s plenty of that in this gripping new installment in the life of the Lagotti clan.

When hiding in Canada doesn’t work, the only option is to run again and build a fortress of your own in the land of the free. To start in a new town means you must prove yourself all over again – no matter how much money you bring to the table. Building a drug peddling business takes time and there’s always the kids to worry about when you get home.

So when a drug deal goes south, Mary Lou must fight to save her children. How far will she have to go to keep her family alive with Latino heroin traffickers and the East Coast mob holding her babies captive?

Set three years after the First Bank of Baltimore robbery, this fresh tale is a perfect stand-alone story, which will be enjoyed by new and existing readers.

When I think about my favourite crime films – like The Godfather. Cool Hand Luke, The Getaway, Once Upon a Time in America – I am incredibly aware that they were based on novels. The written word came first. Don’t know about you, but I’m not that surprised. After all, these are all US films and the cost of production means producers need to be pretty certain they’re going to get back their investment before anyone has even bothered to write a script.

A second reason I’m not surprised is that I went through a phase of reading books upon which my favourite films were based. Of the four I picked, three of the novels are not good. And I mean, really not good. The Godfather is the exception and I must admit I stole the classic Mario Puzo structure for at least three of my own novels.

The other books were pulp fiction and not in the Raymond Carver sense. In the more literal meaning of the phrase. Now, the linking theme between these poor unfortunate literary efforts was that the ideas behind the stories were brilliant even if the execution of those ideas left me either cold, bored or both. I understood the backgrounds of the cinematic characters better and that was a joy, but the advantage of making a movie from a book is that it affords an opportunity to re-edit every element of the original narrative, partly to make the four or five act novel conform to the three act structure of a Hollywood film and partly because the film makers get a chance to improve on everything the author created.

Obviously, as a writer you would expect me to claim that books are better than films, but I don’t subscribe to that philosophy. Film represents (e)motion pictures – as the book of the same name by Wim Wenders reminds us – and the novel represents emotions in the mind. These are different things.

Equal but different. Cool Hand Luke was better as a film; The Big Sleep was better as a book. I write in the crime genre and I am very aware that I am influenced as much by the films I’ve watched as by the books I’ve read. And when I write, I know there are plot themes and scenes I visualise which have their roots in movies I’ve seen. The quality of the language I choose is grounded in the books I have read. When I’m constructing a novel, I do my best to leave description to a minimum to follow Elmore Leonard’s maxim but also to give the reader the space to create their own movie in their mind and not get bothered by me tramping all over their literary flowers.

About the author:
Leopold Borstinski is an independent author whose past careers have included financial journalism, business management of financial software companies, consulting and product sales and marketing, as well as teaching.

There is nothing he likes better so he does as much nothing as he possibly can. He has travelled extensively in Europe and the US and has visited Asia on several occasions. Leopold holds a Philosophy degree and tries not to drop it too often.

He lives near London and is married with one wife, one child and no pets.

Appreciate the opportunity. Thanks very much. Leo