she has always known what she wanted - Who Would You Choose? (Love in the City #4) by J.M. Bronston

Marge Webster has always known what she wanted, and how to accomplish it. As editor-in-chief of Lady Fair magazine, she’s got influence and fame, a social calendar as packed as her closet, and a gorgeous attorney boyfriend. 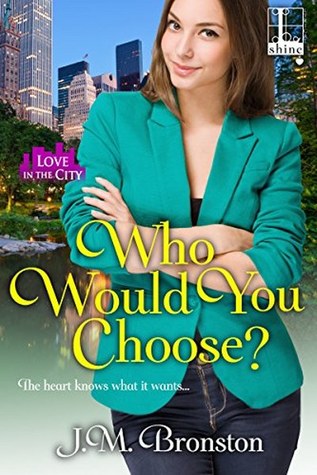 Marge Webster has always known what she wanted, and how to accomplish it. As editor-in-chief of Lady Fair magazine, she’s got influence and fame, a social calendar as packed as her closet, and a gorgeous attorney boyfriend. Jerry is successful, loving, and ready to settle down. As for Marge—she just feels exhausted. Maybe that explains her weak knees and fluttering heartbeat when she runs into Sam Packard, her high-school crush.

Back then, Sam was the most popular and charismatic guy around. He didn’t always understand Marge’s dreams, but their connection was undeniable. Marge isn’t that awestruck girl anymore—but for the first time in her life, she has no idea which path to follow. Maybe the answer is to step back, take a doctor-ordered European vacation, and explore exactly what and who makes her happy. The answers might surprise everyone—especially Marge…

**can easily be read as a standalone**

About the author:
Joan Myra Bronston grew up in New York City, married her college sweetheart, and went with him to Germany for a year while he was in the Army and where she worked as a telex operator and mail clerk. They then moved to Austria where Joan spent five years teaching at an international school. She is the mother of three wonderful girls and the grandmother of a super-wonderful grandson. Joan was also a secretary, social investigator, and psychiatric researcher, before entering law school and eventually becoming a corporate attorney. In addition to her years in Europe, Joan has lived in Pittsburgh, Chicago, and, for 18 years, Salt Lake City. At last, she has closed the circle and returned to her first and most beloved—New York City.

Really great excerpt, thanks for sharing : )

The cover is lovely thank you for the fab giveaway.

I don't know who I'd choose but I'd for sure want to look like a boss while I did it. Great cover and thanks so much.

Love the cover and the excerpt sold me. Sounds great! Good luck with the book.