What will she decide? - The Island Dog Squad (Sandy's Story #1) by Deb McEwan 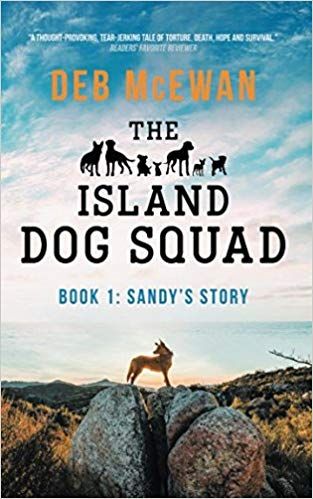 In the depths of despair, she has no idea who, or where she is.

Dying of thirst with her ribcage almost poking through her skin, she can barely put one paw in front of the other when she’s rescued from the street.

When Sandy’s people parents take her to her beautiful new home on the island, she tries to focus on her future, and return the love and kindness showered upon her. Then she meets Lola, Obie and Chip, and the traumatic flashbacks begin.

As her past slowly unravels, and her memory returns, Sandy must make a choice that will determine her life and her future.


What will she decide?

Digger curled up in his own bed, and as the sun went down and I laid my head on my front paws, he began to talk like he had to...
‘I was taken away from my mother, brothers and sisters at a very young age,’ he said, ‘and told I was to be a hunting dog. I was amongst others the same as me and we had little to eat. It was every dog for themselves. Every scrap we were thrown was fought over. Where we lived was guarded by crazies.’
I raised a questioning eyebrow.
‘Big dogs who had been treated as badly as we had, but taught to be aggressive. They didn’t care who they hurt except for the master who they obeyed without question,’ he shuddered as if remembering something awful.
‘What happened?’
‘I saw a puppy younger than me who had managed to get out of the enclosure. Two of the crazies killed her.’
‘For the love of Lassie! How awful.’
‘Awful was an understatement! We lived in constant fear for our safety, in filthy conditions, always hungry and thirsty. Yet we were expected to work hard on hunts when we barely had the energy to put one paw in front of the other.’
‘So couldn’t you escape while you were out hunting?’
‘I could have tried,’ said Digger. ‘But we were told that escapees were always caught and never lived to tell the tale. I still had the mental picture of the puppy being savaged by the crazies, and was too frightened.’
‘What if you weren’t made for hunting and underperformed?’
‘Oh, Fish, to have your innocence! Eee!’
Now wasn’t the time to explain my life hadn’t been a bed of roses so far.

About the author :
Following thirty odd years in the British Army, Deb and her husband Allan decided to become weather refugees and settle in Cyprus.

Throughout her life Deb has dabbled with writing. Her first book was 'Reindeer Dreams' - a quirky rhyming Christmas story for children featuring Barry the reindeer and his family. Her first grown-up books about aliens and unearthly spiders could be explained as off the wall. The Afterlife trilogy came next with a few 'Jason the Penguin' books in between.

The first book in the current series 'Unlikely Soldiers', is set in 1970s Britain, with others to follow through the decades.

Deb now spends her time writing, working part-time, avoiding housework and playing tour guide along with Allan. She tries to keep the pounds off by playing netball and long-distance walking.