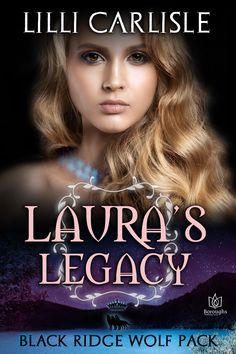 A GIFT BOUND BY LOVE

While Laura was attending the annual omega celebration, a ruthless ogre attack destroyed her village and wiped out her family. Heartbroken, lonely, and adrift, she was forced to rely on the kindness of the Black Ridge wolf pack alpha for a home. And so were many others, including members of the small Newton pack, and their handsome, strong alpha, Dedric. One brief interlude was all it took for Laura to know she would choose him as her mate.

Alpha Dedric Newton couldn’t believe his good fortune. Beautiful and powerful, Laura was the omega of his dreams. Worried he had so little to offer, he insists she spend time with his small pack as they rebuild their village and homes. Laura and Dedric’s time in Newton strengthens their bond while evil works to undo all of Laura’s gifts, especially her legacy. After finding the greatest love an alpha could dream of, Dedric will do anything and everything to keep Laura safe from harm.

Dedric stormed back to his temporary house where his beta, his parents and the head of the women’s auxiliary waited in grim silence. Mary and Wilhelm, Samson and Rayanne followed him into his office. He sat behind his desk trying to calm the rage burning inside of him before speaking to the group squeezed into the room, all of them wearing the same pissed-off expression. It wouldn’t do to start ripping heads off to find out who was responsible for this insult, but Dedric was so angry he now understood what people meant when they said their blood boiled.

“Answers,” Dedric ordered. “I want answers as to why what should have been a happy and joyous occasion could have turned into chaos and insult. If we weren’t lucky enough to have Laura’s abilities this would have turned out to be a disaster.”

“Son, I can’t think of one person in our pack who would do something like this,” his mother said. “Everyone was overjoyed when they found out you had attracted the attention of an omega,” she assured him as she poured him a cup of coffee from the machine on the sideboard.

“Well somebody did,” Wilhelm groused. “It was plain to see the leg of the table had been cut. It wasn’t a failure due to the weight of the cake and it wasn’t because the table was old, because they’re new. Someone is responsible.” Wilhelm stared out the window. “I think you need to say something to the pack.”

“I will in the morning,” Dedric agreed.

“Oh, I think it’s going to have to be a bit sooner than that,” Samson said as he looked out the window and into the yard in front of the house.

Dedric got up, rounded his desk and looked through the window to find what looked like the whole pack standing in front of his house. Looks like I wasn’t the only one worried about how this affected Laura. “Right. I’ll go speak with them.”

About the author:
Lilli Carlisle lives outside Toronto, Canada. She’s a member of the Romance Writers of America and its chapter, Toronto Romance Writers. Lilli is a mother of two wonderful girls, wife to an amazing man, and servant to the pets in her life. Lilli writes both contemporary and paranormal romance and believes love should be celebrated and shared. After all, everybody needs a little romance, excitement, intrigue and passion in their lives.

Boroughs Publishing Group can't wait to give you a Xmas gift in July.
Click to Join the party:


Author's Giveaway
the more you comment, the better your chances of winning
a Rafflecopter giveaway

Thank you for having me on your blog.