“Mutation is the hand of God.” - The Book of Eadie (Seventeen Trilogy #1) by Mark D. Diehl

Provocative
Great book
... is a book about what the future might look like if corporations continue to run unchecked
Great ideas and well written 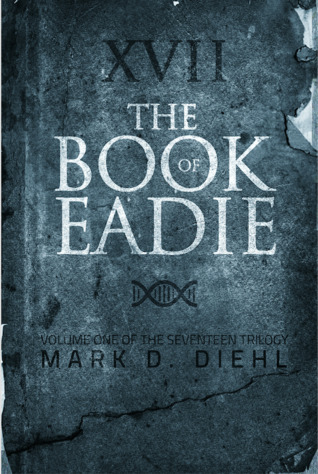 Corporations control all of Earth’s diminishing resources and all of its governments, dividing the world into two types of people: those who unquestioningly obey, and those who die.

Most of the seventeen billion humans on the planet are unconscious, perpetually serving their employers as part of massive brain trusts. The ecosystem has collapsed, naturally growing plants have been declared illegal, and everything from food to housing to medicines must be synthesized from secretions of genetically modified bacteria. Only corporate ambulatory workers can afford patented synthetic food, and non-corporates fight for survival in the city’s sprawling, grotesquely violent ghetto known only as the Zone.

Nineteen year-old waitress Eadie challenges the hierarchy when she assists a bedraggled alcoholic known as the Prophet, drawing massive social-control machinery into play against her. The Prophet predicts she’s the general who will lead a revolution, and a few desperate souls start listening. How can she and her followers possibly prevail when she’s being hunted by a giant corporation and the Federal Angels it directs?

“Mutation is the hand of God.” — The Prophet
“Sometimes nature switches the order a little; that’s called a mutation.” — Dok Murray, Herbalist

Outside the building where Lawrence had last seen Eadie:

A Federal truck sat parked in the street in front of the building, the shape obscured by its electric camouflage and the deepening darkness. The Feds must have captured Eadie by now. They would bring her out any minute.

Lawrence had no weapon. Gene-spliced Federal Angels were three times his size, and there might be two or three of them with her. He would attack them anyway.

That was just how it was with Eadie.

His brain felt so tiny and insignificant with the EI shut down. For the first time in his life, Lawrence was completely cut off from everything and everyone, but he had brought those Feds to Eadie and he had to find a way to help her, even by himself, with his own minuscule, disconnected brain.

A woman emerged from the building, heading straight for Lawrence. He ducked back around the corner, pressing himself flat against the wall.

She came around to stand in front of him. Her frizzy brown hair spilled over a bright blue patch on the shoulder of her beige overcoat. Her pale face was wrinkled and haggard but her jaw was set and her eyes were steely.

“You’re that student who was with the General!” she said.

Lawrence looked past her, trying to appear disinterested. “What makes you say that?”

She gestured at his uniform. “Not many like you around here. And you better learn to look around corners right, or you’re gonna get killed.”

She tilted her head to the side, holding her fingers in front of her face as if they were gripping the vertical edge of a wall. “You can’t just poke your head around the wall.” She imitated him, moving her head around her hands. “That’s gonna get you hurt. Way to do it is stand back from the wall and scoot your body out so you can look.” She did it with the real wall this time, peeking at the Federal truck from a couple of steps back from the corner. She turned back to him. “That way, nobody sees your big ol’ head poking around the side.”

“Okay,” Lawrence said. He gave a tiny shrug. “Thanks.”

“You’re gonna need to know that stuff, serving General Eadie,” she said. “She’s fightin’ for all of us, and for God! Gotta know what you’re doing if you’re fighting for God.”

The woman nodded. “The General. That Prophet, he told me. She’ll set us all free. Sent to us by God, he said, and when you look at her, you can see it. She’s the solution, and I’m tellin’ everybody. Gonna get a piece a charcoal and write it all over.” The woman traced a shape on the wall with her fingers, boxing in an imaginary letter. “E,” she said. She moved her hands, boxing another imaginary letter. “D.” The woman smiled at Lawrence. “You should do it, too. She’ll end all the misery in this world, and I’m gonna help her. Just like you.”
… … …
Fiend territory:

Brian pressed his back against the wall and slowly swung his head to the left, facing the way he had come, squinting and opening his eyes, trying to make out his surroundings. Only a dim silhouette of another half-crumbled building stood out from the darkened sky. He turned back to the right, peering ahead in the same way, but there was nothing visible at all.

“Ready to meet the Unity?”

It was not his own internal voice, not even the strange new voice that sometimes shouted from inside his head. This voice had definitely been spoken. Brian had felt the breath on his left ear.

About the author:
Mark D. Diehl writes novels about power dynamics and the way people and organizations influence each other. He believes that obedience and conformity are becoming humanity’s most important survival skills, and that we are thus evolving into a corporate species.

Diehl has: been homeless in Japan, practiced law with a major multinational firm in Chicago, studied in Singapore, fled South Korea as a fugitive, and been stranded in Hong Kong.

Thanks so much for featuring "The Book of Eadie!" today on Mythical Books! You have a great blog here!

See me at my website to know more about me, or friend/follow on Facebook. (I'll sign in here with Google but I never use it in real life.)