Anything to stave off boredom... The Body in the Ballroom (Alice Roosevelt Mystery #2) by R.J. Koreto

"As in the first book, Alice is a wonderfully realized, a fully alive character, and Joe St. Clair ain’t far behind. The author uses the “real” Alice to full effect, bringing to his readers someone who we truly would be privileged to know. I look forward to further adventures." Helen, Goodreads 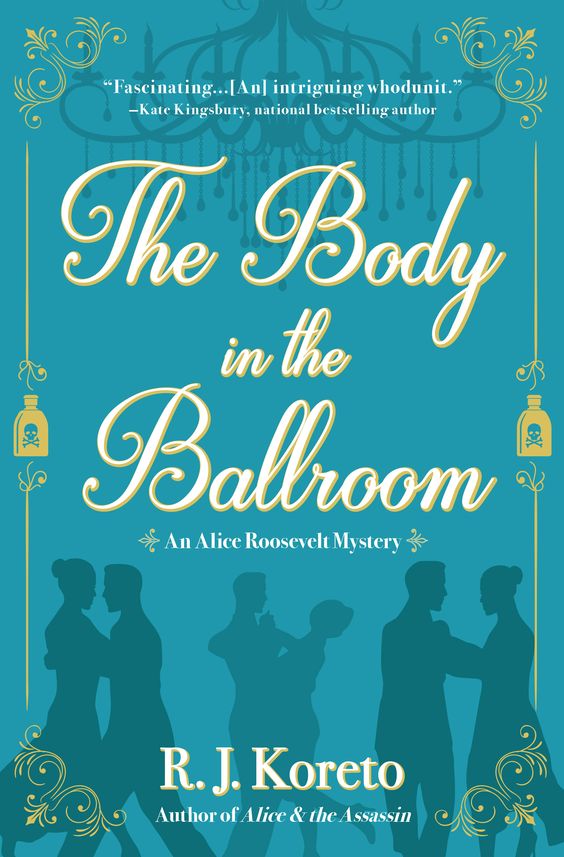 President Teddy Roosevelt’s daring daughter, Alice, leaps into action to exonerate a friend accused of poisoning a man just about everyone hated.

Alice Roosevelt, the brilliant, danger-loving daughter of President Theodore Roosevelt, has already risked an assassin’s bullet to solve one murder. She never expected to have to sleuth another, but she’d never pass up the opportunity, either. Anything to stave off boredom.

And such an opportunity presents itself when Alice is invited to a lavish ball. The high-society guests are in high spirits as they imbibe the finest wines. But one man, detested by nearly all the partygoers, quaffs a decidedly deadlier cocktail. An African-American mechanic, who also happens to be a good friend of former Rough Rider-turned-Secret Service Agent Joseph St. Clair, is suspected of the murder-by-poison, but Alice is sure he’s innocent and is back on the scene to clear his name.

From downtown betting parlors to uptown mansions, Alice and Agent St. Clair uncover forbidden romances and a financial deal that just might change the world. But neither Alice nor her would-be protector may survive the case at hand in The Body in the Ballroom, R. J. Koreto's gripping second Alice Roosevelt mystery.

1. Why Alice Roosevelt and what are the challenges and their solution when one of the characters is/was a real person?
The Alice Roosevelt mysteries came out of a talk with my publisher. We were both native New Yorkers and knew Teddy Roosevelt had been a reforming police commissioner. His daughter Alice was a wildly unconventional woman her whole life—so it seemed like a fun idea to have her take over her father's mantle and become a detective.

I was hardly the first mystery writer to turn a real person into a detective. But although my book takes place at the turn of the century, Alice lived until 1980, so I had to keep in mind there are still plenty of people around who knew her. I had to be accurate, even while putting her inside a fictional mystery. However, her behavior—her antics—were well-documented, and I read about them extensively, to give myself a sense of how she might behave and react in different situations. She really did smoke and gamble and go swimming in a pool in her clothes!

One reviewer of the first book, "Alice and the Assassin," wrote that he stopped halfway through that novel to read about Alice, as he couldn't believe she was as outrageous as I portrayed her. He then finished my novel, noting that he indeed felt my Alice was true to the actual Alice Roosevelt. That gave me a lot of confidence.

2. How much different is your Alice Roosevelt from the historical figure? What did you change to her and why?
I write about a very young Alice—a "teenaged" Alice. The historical Alice was probably a little more self-involved than I have her here at this age, but there's no doubt she was curious and got bored easily, so it's not hard to imagine her inserting herself into a murder mystery.

The biggest change I made is the invention of her Secret Service bodyguard, Joseph St. Clair. He's a friend of her father's, a cowboy and ex-Rough Rider. He comes from a poor and hard background. She becomes infatuated with him, and that gives her a reason to look beyond herself, and inspires her to become a detective.

It was known that later in life Alice held progressive views on such issues as race and homosexuality. Perhaps these developed when she was young, her curiosity piqued when she started meeting people very different from her. Did the real Alice develop a crush on someone she could never have, who didn't return her feelings, as in my novel? We may never know that, but I'd like to think this is how it would've happened. Knowing St. Clair, and seeing new worlds as they investigated murders, might've helped her grow as a person. The fictional and real-life Alice come together.

3. The book description uses the “African - American” term, but your story takes place in a time in which such term did not exist. Is there a limitation for the contemporary authors (or for you) when the story takes place in the past?
I tread very carefully here! Yes, I use modern terms for the book description, but I researched the vocabulary actually used during this period, even within the African-American community, and that's what I used in the book itself. Although terms widely acceptable then are today considered dated at best and offensive at worst, I wanted to be accurate. I don't think any writer of historical fiction does justice to the past or his characters by pretending certain words and terms didn't exist.

But that doesn't mean being needlessly offensive. For example, I have St. Clair object when someone uses "a very unpleasant word for colored folk." No need to actually spell it out—we all know what it is.

4. What is the dynamic between Alice and St. Clair and how their relationship evolved from “Alice & the Assassin”?
Alice is infatuated with St. Clair, her handsome cowboy bodyguard. She's fascinated with how different he is from her. Meanwhile, he is still searching for his place in life, and has a sense that Alice will help him get there. And even though they bicker and disagree sometimes, they do enjoy their adventures together and each other's company. In this second book, I think Alice has grown a little and realizes that there is no chance of anything more than a friendship, but that doesn't change her feelings. Still, she is showing greater shrewdness when examining the relationships at the heart of this new mystery—and enjoys the resulting respect she gets from St. Clair. Meanwhile, she is becoming more mature and is willing to listen to insights from St. Clair and her new friend—St. Clair's sister, Mariah.

That being said, I believe most people actually read mysteries for the characters as much as the plot. I think about the Nero Wolfe mysteries, and although Rex Stout was an expert plotter, the real joy in his books is the fascinating relationship between Wolfe and his assistant, Archie Goodwin. I think the Alice/St. Clair relationship is what keeps readers coming back.

6. How different is our society from Alice and St. Clair’s? (politics, scandals, corruption etc)
Less different than we might want to think! Immigration and its effects on American society were as hotly debated then as now. The rich and poor distrusted and disliked each other. There were scandals and forbidden romances, and newspapers digging it all up and printing it.

But what I really enjoy is seeing how the differences that existed then became the norm now. For example, so many of the immigrant groups that were despised at the turn of the century have now become mainstream, with its members at the highest levels of business and government. Women didn't have the vote then, and now they are elected officials. The old families who ran everything have become increasingly irrelevant—New York City hasn't had a "WASP" mayor in more than 40 years.

Of course, there is still anti-immigrant feeling and women are still not treated equally. There is still racism. But I think of all the change Alice herself saw in her 96 years. It's a lot of fun writing about a vanished world. The leaders at the time likely never foresaw how much things would change, and how quickly. But that's always the case. 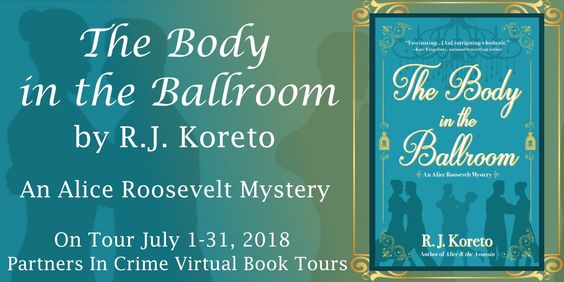 About the author:
R.J. Koreto has been fascinated by turn-of-the-century New York ever since listening to his grandfather's stories as a boy.

In his day job, he works as a business and financial journalist. Over the years, he’s been a magazine writer and editor, website manager, PR consultant, book author, and seaman in the U.S. Merchant Marine. He’s a graduate of Vassar College, and like Alice Roosevelt, he was born and raised in New York.

He is the author of the Lady Frances Ffolkes and Alice Roosevelt mysteries. He has been published in both Ellery Queen’s Mystery Magazine and Alfred Hitchcock’s Mystery Magazine. He also published a book on practice management for financial professionals.

With his wife and daughters, he divides his time between Rockland County, N.Y., and Martha’s Vineyard, Mass.

Author's Giveaway a Rafflecopter giveaway
Posted by CCAM at 3:45 PM

Great interview. Now I want to read this book!