Lust, mistaken for love, will lead to down a treacherous path. They soon learn that the spirit may be willing, but the flesh is weak.

Can love save their souls, or is lust too tempting? 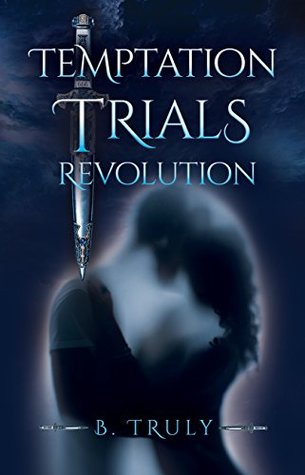 There are always two sides to a story. Can love withstand the ultimate temptation?

A new Regime has arisen from the havoc and destruction of World War III.

Society now has to follow the strict mandates, reign under the dictatorship of His Highest Eminence or suffer the consequences.

Tobias and Kincade are part of a cryptic organization that’s trying to uncover the secrets behind the Regime. Something is suspicious with the new world order—why else would they want to control the most powerful emotion of love? With mandatory arranged marriages at the age of twenty-one, the only way to fight for love is through the Temptation Trials—a government-sponsored reality TV show.

Kincade and Tobias know the rules, but after they meet the women of their dreams, they face a difficult decision. With their impending birthdays around the corner, the guys have to decide if they will bend to the Regime’s will or fight for their relationships.

Lust, mistaken for love, will lead to down a treacherous path. They soon learn that the spirit may be willing, but the flesh is weak.

Can love save their souls, or is lust too tempting?

This book can be read as a stand-alone, before, or after Temptation Trials Part I. Find out the guy’s POV in a new story that unravels through the Trials.

The hue of dark-gray clouds cast over the area. The dimness of the sky fit the situation perfectly—this protest for freedom of speech would not end well. It didn’t matter that Cindy was the governor of California’s daughter. No one was exempt to the new world order. She had turned twenty-one. Her time was up, so she would be married with whomever the government chose. Society didn’t like it. Hell, I hated how the world worked now. It was just better to try to accept the situation and make the best of it.

Cindy Johansson wasn’t hard to recognize, standing out in a crowd as she did. Her blonde tresses were the color of the sun. She was very tall, and her facial features were strikingly pretty.

Holding her sign high while she marched in front of the court house, Cindy shouted, “Fight for love! Fight for love!” Her sign said: No more arranged marriages.

Alongside Cindy was her boyfriend. He held a similar poster. “Trying to control our love lives has got to stop!” he yelled.

“Geez. I got a bad feeling about this,” Rafi expressed, standing next to me.

Cade crossed his arms. “I guarantee it’s going to get ugly.”

Skimming my palm over my bald fade, I replied, “The enforcers look antsy—just waiting for someone to step outta line.”

The media had been buzzing all week about the governor’s daughter coming of age, and she would be married off to some clown in New Zealand. A whole other country half a world away—the Regime knew no boundaries.

When my uncle Marcus first got wind of the protest, it was only Cindy, her man, and a small group of her friends. He sent us to scope out the scene discreetly. This courthouse was the primary location used for most standard arranged marriage applications and all Temptation Trial apps. Yep … that’s how corrupt our Regime operated. At the age of twenty-one, every citizen had to fill out a marriage app so the government could choose your spouse. Even more twisted was that divorce was not allowed, so you were stuck with the person whom you’d never even met for life. It was all about control.

Now a slew of folks had joined the cause, shouting and cheering for Cindy. Others were yelling their own proclamations of justice. Rebellion against the strict laws had been stirring up for many years—this just definitely wasn’t the way to voice your opinion.

Enforcement had the entire perimeter around the courthouse surrounded, waiting on orders from their superior on how to handle the situation. My crew and I stood outside of the danger zone, but we were still close enough to see. Under normal circumstances, the officers would’ve already pounced.

Cindy and Gary raised their posters higher, yelling and demanding that control over love had to cease. Several courthouse staff were in front of the building, peeping at the scene. Loud, blazing sirens infiltrated the area. A cop car and black SUVs whipped around the corner, coming to a screeching halt. A large group of enforcement got out of the vans, rushing over to the throng. They were all dressed in black—shirts, pants, and combat boots. Helmets covered their faces, and they held large metal shields with clubs. A short, pudgy man eased out of the car. Prancing over to the crowd like he owned the parking lot, the tool lifted his bullhorn.

“This is your only warning! Leave now or everyone here will face the penalty,” Mr. Bullhorn advised.

The crowd simmered down a bit, seeming to mull over his words. “This is about to hit the fan,” I speculated.

“You think they will arrest her?” asked Cade.
Rafi raised his eyebrow. “They claim that no one is above the law.”
“We’ll find out soon enough,” I replied.
Cindy veered her shoulders high. With her sign above her head, she yelled, “Fight for love! Fight for love!”
Her man smiled wide. “That’s my girl. Screw the law!”

This got the crowd riled up. They shouted their approval, joining in the protest. Fists rose in the air. With their voices blaring, they formed a united front—ignoring the warning they were given. The enforcers moved in. A male drew out handcuffs, making his way toward Cindy. The enforcer with the cuffs grabbed Cindy’s wrist. She struggled against him. Her efforts were useless. The officer yanked Cindy’s arms behind her back, handcuffing her.

Goodreads ** Amazon
About the author:
B. Truly has wanted to be an author since she was fifteen years old. She is grateful to have accomplished this dream. B. Truly has very vivid dreams and a wild imagination. She likes to read, watch tons of TV shows, and movies. She’s addicted to romance, and gets a thrill out of action and sci-fi. She writes new adult and adult romance—sci-fi, dystopian, and paranormal genres.

B. Truly likes to explore different elements of sci-fi romance, and create various realms of reality. She also loves creating impossible situations for her characters to grow from and try to overcome.

B. Truly has three wonderful children, and a husband who defines the person that she is today. She works full-time as an Ultrasound technologist in Houston, Texas.

a Rafflecopter giveaway
Posted by CCAM at 12:47 PM