A Fast and Enjoyable Read
Can't wait for the next book!!
Gracie Hofner returns, and chaos reigns—including a couple of ghosts trying to save their granddaughter. 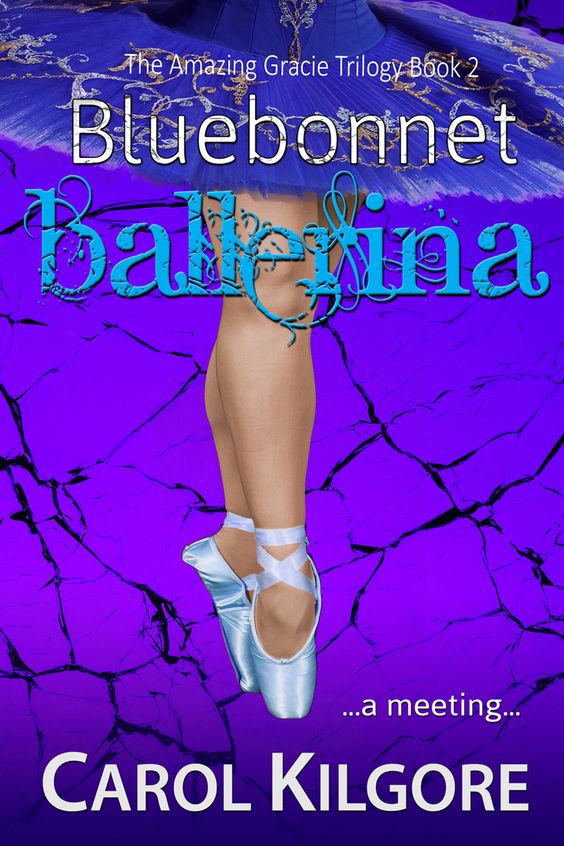 Gracie Hofner returns, and chaos reigns—including a couple of ghosts trying to save their granddaughter. But as Gracie dances from problem to problem, she’s unaware the music has been orchestrated into a murderous symphony.

When a different melody reaches Gracie’s ears from a guitar played by the new tenant living in her garage apartment, her tension vanishes. She listens unseen, cocooned in the shadows on her patio, and wonders who he’s longing for—and how it would feel for someone to crave her that much.

She can’t dwell on those thoughts, however. Problems of murder and missing prisoners abound. To say nothing of the ghosts. No one ever said being a law enforcement consultant would be easy.

Bluebonnet Ballerina follows Jalapeno Cupcake Wench and is the second book in The Amazing Gracie Trilogy.

“Ow! Ow! Ow!” Gracie Hofner twitched with each exclamation.
“For crying out loud, Gracie, you’d think I was trying to kill you.”
“You are. This is supposed to feel good.” Gracie tried to lift herself up.

Ariana held her down with one arm and tortured her with the other. “You’ve got a knot bigger than Thor’s fist in here. I’m working it loose.”

“It’ll work itself out.”

“No it won’t. It’ll give you a headache and neck spasms and a hitch in your side. Now lie still and shut up.” A hundred and ten skinny pounds of pure muscle and bone returned to attacking Gracie’s back.

Ariana Ayala was Gracie’s best friend, but when Ariana went into massage mode, arguing was futile. This was her first massage in her friend’s new studio, but nothing about her technique had changed. Gracie sighed and tried to relax. The more she loosened up, the harder Ariana dug. The woman had forty fingers and ten elbows, all of them poking Gracie’s sore back.

“Much better now.” Ariana continued to knead the same spot, except with much less pressure. That’s what it felt like, but Ariana always said the pressure was the same. The difference was the muscle had relaxed. “Next time, I’ll work on it again. It won’t be as bad. You must’ve had one hell of a week.”

“You can tell me later. Relax now. You’ll enjoy the rest of this.”

About the author:
Carol Kilgore is the award-winning author of The Amazing Gracie Trilogy. In addition, she is the author of In Name Only, Solomon’s Compass, and Secrets of Honor , three standalone romantic suspense novels set along the Texas Gulf Coast.

She and her husband live in San Antonio, the setting for the Amazing Gracie books, with two quirky herding dogs who still require help opening the food bin and the door.

YouCarol is a member of Romance Writers of America, Mystery Writers of America, and Sisters in Crime.
You can learn more about Carol and be the first to know when the third book in the Amazing Gracie Trilogy will be released by visiting her website and subscribing to her newsletter at or connect with her on Facebook and Twitter.

Thank you for hosting me today. I'll be in and out to respond to comments.

Lisa and Victoria - Great to see you here. Thanks for following Gracie's tour :)

Thank you for commenting, Rita :)

thanks the excerpt sounds great good luck with the book

I appreciate your good wishes, Wendy.

Thanks for hosting the giveaway. I hope that your book is a success. Bernie Wallace BWallace1980(at)hotmail(d0t)com

Thanks. Hope you'll read and enjoy.

Hi, Ellen. Thanks for your kind words.

The stories and characters are in my head. They just come, but only rarely does the full story come at one time. Sometimes it's only a name or a place. When I learn too much to keep just in my head, I start making notes - I use really fancy spiral notebooks that I buy on sale in the summers before school starts. I just stocked up!

I don't start writing until I know enough about enough of the characters and enough about the plot to know the beginning, end, and the major turning point. Even so, these are not written in stone. They often change as the characters interact and get to know each other. But they act as a framework and keep me on track.

All writers write differently. Someone said that the first draft is telling yourself the story. That's sort of how it is for me.

Even though I have all the notes plus more in my head, it's often difficult for me to get started on a daily basis. I've tried all kinds of things. I write best when I don't have something else hanging that must be done that day - aside from all the usual things like food, laundry, and dogs :) - so I try to get everything else done first and then settle down for a few hours in the afternoons. I'm a great procrastinator, so I say I'll only write for 15 minutes, then I'll get a snack. Usually once I actually start, though, I forget about the snack and I'm good until interrupted.

I'm currently working on a fourth Gracie book, separate from the trilogy, which will be a standalone. And the trilogy will become the first books of a series.

Carol, thanks for the response :)