Will her choice turn out to be the right one? - Tangle of Choices (Neglected Merge #2) by Eve Koguce

" This is one of the most beautifully written fantasy novels I’ve recently read. The world-building is so cleverly thought that sometimes you can lose a sense of reality and believe that you are an honored member of the diplomatic mission of the Winged ones."- Ellen K., Goodreads 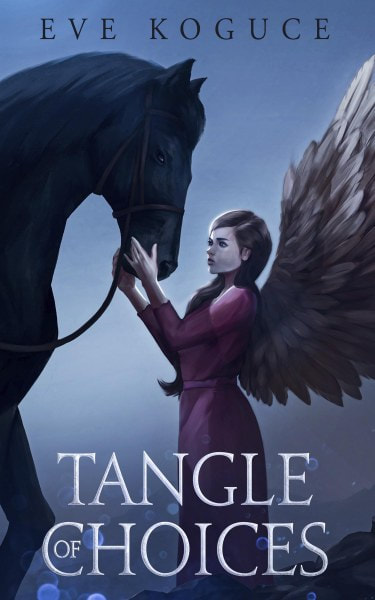 Description:
“Tangle of Choices” is a futuristic fantasy drama novel.
The two different worlds have made the first diplomatic steps towards each other, but at the same time they keep aloof from closer emotional and personal involvement.
Tauria is the only person who is a part of both worlds now.
Harsh circumstances force Tauria to face difficult choices. They lead to personal drama which mercilessly pierces right through her established life. Tauria, guided by a sense of duty to people whose fate depends on her decision, risks her love and family life. Her husband Doron, despite being a person endowed with power as the future Ruler, cannot help his wife and share her burden.
Tauria, in pursuit of a noble purpose to keep their serene life style intact, hurts those who are important to her, testing her friendships, marriage and own sanity to the very core.
Will her choice turn out to be the right one? Will the fact that the sacrifice is justified be sufficient consolation when the whole extent of damage becomes evident?
As part of her crusade against hostility aimed to destroy the carefree lifestyle of both worlds, Tauria is forced to cooperate with an aggressor. Tauria faces the unknown, and the discoveries she makes change her view of the world.
“Tangle of Choices” is the second book in Neglected Merge series, but it can be read as a standalone novel.
EXCERPT
Eve
Abelia was sitting on a hard bench in the bank of wings.
The most precious possessions of the Winged Ones were stored in this vast space, with its ceilings higher than the highest ceilings of the halls of the White Castle. Its walls were covered in a row after a row of startlingly white wings. These were virgin wings: grown from a cell. Most of these beautiful limbs would never find a master. They would stay on this wall, unmoving and untouchable, almost sacred, for centuries to come. For many generations, the bank of wings was a manifest, a statement the Winged Ones made to the world and themselves. Its practical value was vague.
Abelia’s gaze wandered across the rows of the purely white wings. It paused upon a pair of tiny wings. Had there been a case in their history when an infant needed to have a transplantation? Abelia hadn’t heard of such. She wondered why her people continued to keep the bank of wings so meticulously stocked. The only case there was an acute need for the transplantation of wings was when Tauria had needed it. No one lost their limbs these days.
Abelia was coming to the sanctuary since she was a child. She remembered her awe when she had entered this place for the first time. She had come with her class: her parents didn’t believe in separating themselves and their children from the crowd. Back then, she hadn’t expressed her admiration verbally. She hadn’t even thought about doing it. She had stayed reserved and dignified during the excursion, just as it was expected from a Ruler’s daughter. The children – they were six to eight at that time – had walked in pairs solemnly. At the same time, Doctor Slythe explained the molecular method of growing wings and its significant differences from cloning. Abelia had listened carefully: science was her favourite subject. But in this case, she had also marvelled at what she had seen around her. Since that first visit, she came here regularly. The feeling she had experienced being among the rows of bodyless wings had been so overwhelming that she had used every opportunity to repeat it. She just sat there, in front of the walls covered with human-created wings – the achievement of her nation that had secured their survival – and thought about everything she couldn’t talk about with others.
Abelia had come here as a child, then as a teenager. She had come here after she got married when she realised that something was wrong with her, with Mael and the whole arrangement of their perfect from the outside matrimony. She came here now. It was the only place where she could confess privately that she was happy. She was happier now than she had been in years.
She loved the feeling of solitude when she returned to her quarters after a day of meaningful activities. She loved the feeling of doing something meaningful. She didn’t feel lonely when the empty rooms greeted her with silence. She didn’t feel abandoned when no one, often not even Sonrisa, was there to talk to her and ask her about her day. She hadn’t noticed that at first, but when she had, she was taken aback, ashamed even. She soon recovered, realising that it was the way she was. She had been like this before, and she wouldn’t change. 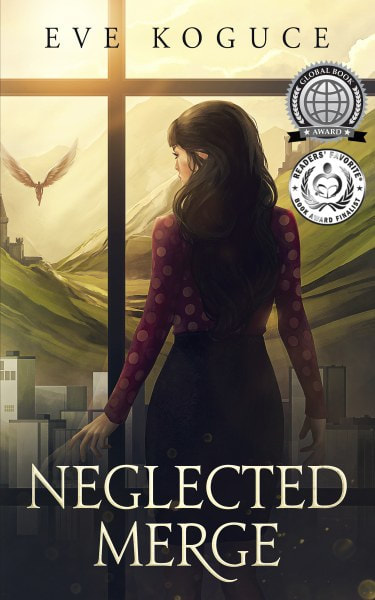 About the author:
Eve Koguce has been in love with books for as long as she remembers herself. The typewriter her first attempts at writing had been made at still sits proudly on its shelf in the basement. After fifteen years spent trying to fit into the office work pattern, Eve Koguce had decided to pursue her dreams and turned to writing.
Eve Koguce lives on the coast of the Baltic Sea with her husband, her son, and their exceedingly charming ginger cat. She loves nature, history, and literature. Her hobby - and a childhood dream that came true - is horse riding.
Eve's debut novel “Neglected Merge” - book one in the Neglected Merge trilogy - has won a silver medal in the 2021 Global Book Awards in the Science Fiction / Fantasy category. It also won a finalist award in the 2021 Readers’ Favorite International Book Award Contest in the Fantasy General category.
Newsletter * Facebook * Twitter * Instagram * Bookbub * Amazon * Goodreads
Author's Giveaway
a Rafflecopter giveaway
Posted by CCAM at 6:30 PM

I enjoyed the excerpt, Eve and Tangle of Choices sounds like my kind of book and I can't wait to read it! Thanks for sharing it with me and have a wonderful holiday season!

THis looks like a good one! I like the cover art. Thanks for sharing the excerpt with all of us! :)

Neglected Merge is turning into one of my favorite book series. I never want it to end.

I really enjoyed reading about this series. It sounds fascinating.