"I loved reading this book. Characters and places came alive with vivid descriptions. [...] I can't wait for the other books in the trilogy." Kevin Ryan, Amazon 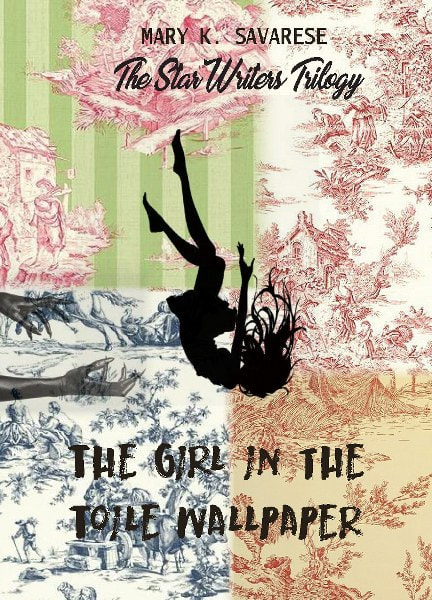 Description:
Alice may have fallen through the looking glass and created a relationship with the Cheshire Cat but it's twelve-year-old Tyler who falls into the toile wallpaper and unwittingly bonds with thirteen cats.
Tyler must rescue the girl of his dreams or forever be imprisoned inside the wallpaper of time while running from an evil wizard.
EXCERPT
Prologue

It is said, “Where evil rages, hope prevails.” This is not about evil for hope shall find a way…

He watched as the dark shadows swirled across the room. A wind, as strong as a summer tornado, spun and yet moved nothing. Dante hid in the shadows and the sound of squalls raged through his ears. He inched his way toward the massive windows and darted behind the heavy drapery. His heart raced and he gasped when shards of light flashed through the room and threatened his reality. When a lightning bolt shattered, he winced and stepped deeper into the folds of the fabric. Standing in the middle of the study, a boy held tightly to a girl in his arms. Dante wanted to help them but how? The evil man’s robe glimmered with each wave of his arm. Dante watched in horror as the man threw the sheets of paper onto the floor. His long, golden fingernails glowed in the dim light. As the pages floated, each piece crawled toward the couple as if alive. Awkward sounds filled Dante’s ears as ghost-like buildings hovered through the air as if they were nothing more than a whisp of smoke. Now, a medieval scene flashed before his eyes, and the curtains vibrated in his hands. A flicker of an olive tree and then a farmhouse and then a vineyard … are those sheep? Dante tried to inch closer but his feet refused to move. He was glued in place behind the drapes. The ghostly objects disappeared into the paper and he trembled in terror. The shadows formed into a miniature print, each arranging itself according to the direction of the evil man. The man was painting a distressing scene through the movements of his symphonic hands. The wizard swiped along the floor and the girl was jerked into the air. She hovered for only a moment before spinning as easily as a spinning wheel. Then as if no friction ever existed, the girl screamed and the wind sucked her into the cloth paper … the girl was gone…

About the author:
Mary K. Savarese is an award-winning author & speaker born and raised in Brooklyn, New York. She is known for her quirky titles. She earned a degree in accounting from City University, NY and worked within the insurance and financing world. Her debut novel, Tigers Love Bubble Baths & Obsession Perfume (who knew!) is a contemporary spiritual mystery that transcends three genres … mystery, spirituality, and romance, and won eight national book awards. Mary was a religious education teacher and is now a Eucharistic minister for the Catholic church. After raising a family in Connecticut, she moved to Florida with her husband and spends her time writing entertaining and unusual stories. Her latest release, The Girl In The Toile Wallpaper, is a fantasy adventure intertwined with romance. It is the first novel in The StarWriters Trilogy.
Website * Goodreads * Facebook * Twitter * Instagram * Bookbub * Amazon
Author's Giveaway
a Rafflecopter giveaway
Posted by CCAM at 11:38 AM

So thrilled to be on today's journey with Mythical Books!
Cheers,
Mary K. Savarese

I like the cover, synopsis and excerpt, this sounds like an awesome read. Thabk you for posting

Hi Bea,
Thank you so much for your kind and encouraging words. You have made my day!
Please stay in touch. I hope you enjoy The Girl in the Toile Wallpaper.
Cheers,
Mary K. Savarese

@Bea - I also liked the cover, blurb and excerpt. When posting I looked twice to find another one.
@Mrs.Savarese - I'm glad that you did not give up writing. I believe "The Girl in the Toile Wallpaper" will become my friend :)

Bea, Thank you so much!

I was hooked as soon as I read the synopsis.

Hi Laura,
Thank you so much! You made my day!
Cheers,
Mary K. Savarese

Mary K. Savarese is new to me, but I love meeting new authors. Thanks to this blog for the introduction.