just something to do until... Double Negative by Susan Marshall

"The romance story offers some real chemistry, and a love interest who ticks some different boxes than we might expect. Overall, a true-to-life young adult novel that favours nuance over the broad brush, taking the time it needs to unfold a complex story." Theresa, Goodreads 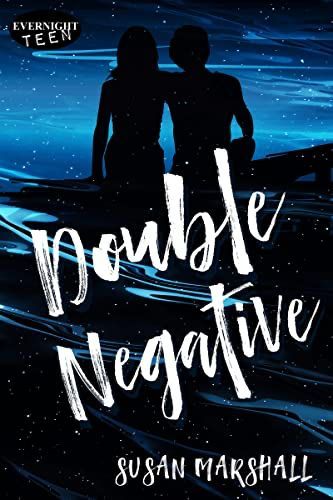 Description:
Published: November 12th 2021
Injured competitive swimmer Reece never wanted to be Vice Prez of West Hill High. It was her brother Jamie’s idea, just something to do until she could get back into the pool.
She knew that Jamie—who led his campaign with a striptease “election speech”—would be a complete “President Dumbass.” But Reece didn’t foresee that she’d fall hard for Jamie’s Student Council rival, Zain.
Zain is hot and intense, plus an amputee and a basketball star. Between Zain’s disability and Reece’s surgery, they have their challenges, but that deepens their connection—until he drops a bombshell about his accident. Suddenly, everything important to Reece starts to implode.
Struggling with issues of family loyalty, secrets, and scars, Reece must decide if real relationships are worth the heartache.
EXCERPT

The atmosphere in the auditorium was near electric. The students were gobbling up the performance, knowing Jamie’s “speech” could be stopped at any second. As he started to lower his swimsuit, DiFran suddenly—finally—stomped onstage. I momentarily covered my eyes with my good hand, and when I peeked through my fingers, I exhaled in relief. His flesh-colored t-shirt was part of a unitard. No frontal nudity today, folks.

Fists and jaw tightly clenched, DiFran leaned in and whispered insistently into Jamie’s ear. But like a pole dancer resisting the grand finale, Jamie shook him off.

High-bun girl leaned forward as my brother turned ass backward to the audience. Large black letters were written across his butt—Free on the left cheek, Ice Cream on the right. High-bun girl— and pretty much the entire student body—went insane as the dance music morphed into a conga drumbeat.

As Jamie thrust out one butt cheek, everyone yelled, “Free!” He pulsed out the other one to a refrain of, “Ice cream!” Even my gym teacher Ms. Walker started shouting along, while Jamie wiggled one cheek and then the other. “Free ice cream!” I gripped the armrest with my good hand. Very presidential.

Moving to the speed of Jamie’s bum, the chanting accelerated to a fevered pitch. Riding an ice cream vendor bike, Dean blasted through the backstage curtain, skidding to a stop. He opened the cooler, pulled out a few boxes of cones, and lifted them up high like a trophy.
DiFran took center stage, waving his arms furiously, trying but failing to halt the deafening noise.

“Are you quite done?” he huffed into the mic. Jamie, who was suddenly in his trunks and at his side, shook his head. “Wrap this up pronto,” DiFran spat.

Jamie tilted the microphone toward his mouth as the auditorium quieted down. Here comes the big speech. Despite all the shenanigans, or maybe because of them, everyone seemed ready to listen. It was almost a dead silence when Jamie leaned in and spoke his first words, slowly emphasizing each letter.

“For free ice cream, vote Jamie and Dean.” He paused. Everyone sat quietly, waiting for more. But instead, Dean ripped open boxes as Jamie reached over and started firing ice cream cones at the audience. Even though I was way out of range, I ducked. A mad scramble ensued. The bull had been released.

About the author:
A lover of libraries, Susan obtained a Masters Degree in Library Science but found that she was too disorganized for that field. Instead, Susan worked at The Globe and Mail newspaper and then Seneca College. Four kids later, she decided to stay-at-home, spending her quiet moments indulging her love of writing.
The old adage is to "write what you know." In Double Negative, Susan channels her experience as a parent of a teen amputee and her misguided belief that she was once an athlete. The inspiration for NemeSIS was the complicated sister dynamic in Susan's estrogen fuelled household in Hamilton, Ontario. An avid reader, she loves e-books and falls asleep nightly to the soft glow, oblivious to what happened on the last page.
Susan lives in Toronto with her husband, three sons, a daughter, rescue dog Bean and Indy the cat.
Website * Goodreads * Facebook * Twitter * Instagram
Author's Giveaway: a Rafflecopter giveaway
Posted by CCAM at 12:18 PM

great cover, this sounds like a great book to read