When a world is reimagined… Beyond the Cogs: A Steampunk Anthology

"What a cool read! Loved the Steampunk elements in this anthology and the originality brought to each story! " Candance R, Goodreads 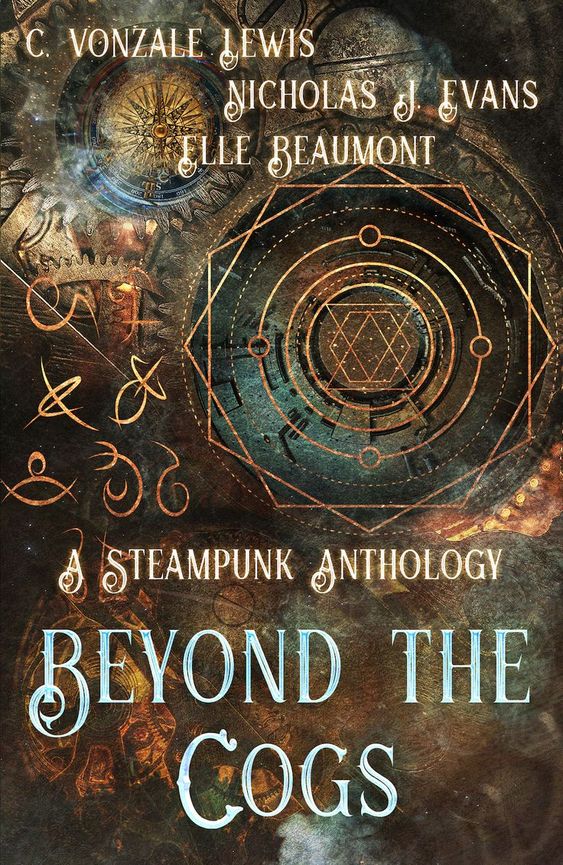 Description:
Published: November 17th 2021
When a world is reimagined…
This anthology contains three impeccable steampunk stories. Ranging from the gritty tale of battling a creature who steals the souls of others, to dabbling in the taboo art of imbuing a human soul into an automaton, and even a man venturing back home only to discover he’s been demonized.
The Soulless Ones by C. Vonzale Lewis
The Rogue of Vangard by Nicholas J. Evans
Gossamer & Thorns by Elle Beaumont
For those who love adventure in new worlds, gritty stories, and heart-wrenching tales, this collection is sure to resonate with you!
EXCERPTS

The two-story French inspired building was painted white with pale yellow doors. Magnolias sat in a flower box underneath all the windows. The green awning over the door had a painting of a woman wearing a corset and a man with his jeans so low on his hips you could just make out the line of hair surrounding his manhood.
I pulled open the doors and warm floral-tainted air rushed out. A fire blazed in the fireplace against the wall. Two old fashioned wood-trimmed couches sat across from one another, with a dark wood coffee table sitting in between. A single chair sat off to the side. Cozy.
A woman sat in the front room with a shotgun resting on her bare thighs. Long red hair pulled up into a bun with a few stray tendrils surrounding her face, she regarded us out of deep blue eyes.
“What’s your pleasure, darlin’?” she asked, her red-painted nails tapping lightly on the gun barrel.
“You greet all your customers with that shotgun?” I asked as I eased my hand toward my own, just in case.
The woman shifted her gaze to Pearl, assessing, then smiled, her whole face lighting up with the gesture. “Can’t be too careful right now.” She stood, giving us an unobstructed view of her black camisole and bare legs. “New Orleans isn’t too safe right now. Folks are packing up and leaving.” She leaned the gun against the chair and pulled her black, silk robe around her. “Figured I’d get a feel for the person coming through the door before I let them see my girls.” 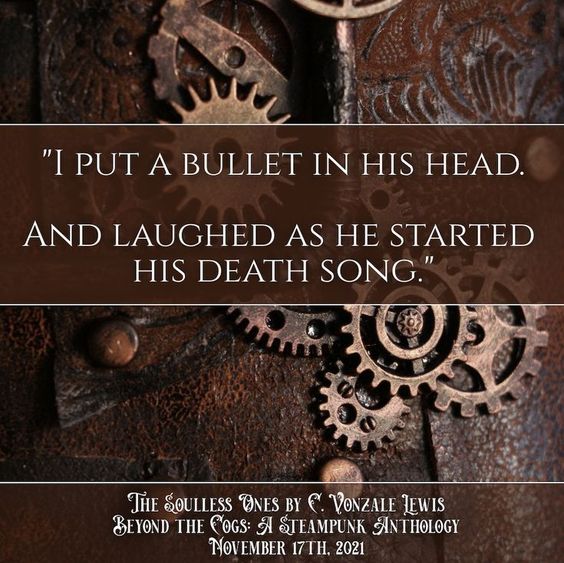 “You do seem to be the only business open,” I said.
She nodded. “No amount of danger would ever stop a horny bastard seeking out some company.” She studied me for a minute. “Yet, you don’t look as if you’re pursuing a good time.”
It was my turn to smile. I stepped forward. “No. Not looking for a good time. My name’s Parasol Daring.” I jerked my head toward Pearl. “This is my sister, Pearl.”
“Eliza Willow. Most folks call me Ella.” She looked at Pearl. “An automaton for a sister. Must be the best kind. My own sister cleaned me out and left when she was eighteen. If I ever see her again, I might put a bullet in her head.”
Pearl laughed. “Now you’re talking.” She extended her arm, showing off my failed attempts to make her look more like me. “My sister covered me in toxic paint when she was seven.”
“Why didn’t you remove it?” Ella asked.
“It helps when I tell people of the near brush with death at the hands of a deranged seven-year-old.”
I shook my head. Pearl loved telling that story.
Ella furrowed her brow. “Wait. Are you the late Bobby Daring’s granddaughter?”
I nodded.
She gave me a sympathetic look. “His death must have hit you hard.” She reached out and squeezed my hand. “He was a masterful inventor. The first deviser.” I smiled at that. He was the first to bring the machines back into the world. “The new man who took over is not half the genius your grandfather was.” She shook her head. “Sub-par automatons. It’s a good thing other folks have taken up the trade.” She frowned. “Although I imagine it’s hard seeing your grandfather’s work be reduced to trash.”

The Rogue of Vangard

The battered bronze carapace of the rotary-cycle rattled dangerously under my feet.
Every bolt and screw shifted in loud clinks and clanks to let me know, in their own metallic language, that I would soon be an unrecognizable pile of goo on the distant street below.
“Come on, you pile of parts,” I shouted to no one at all, foregoing much more colorful terms. “Come on, Come on!” 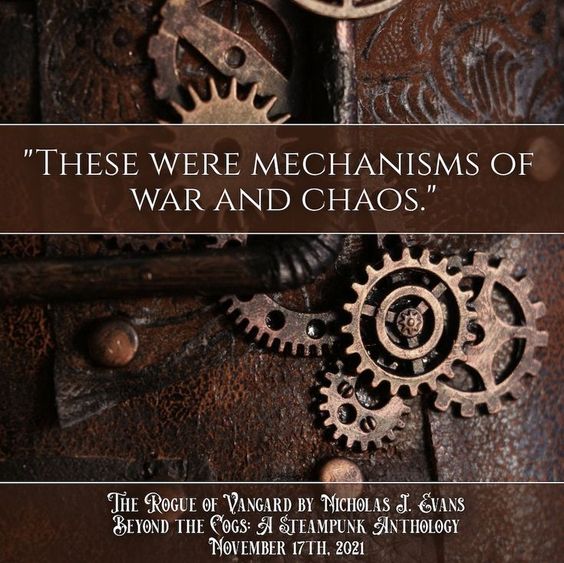 My fingers tightened around the lift console. The vibration of the steam engine reverberated up the steering shaft and through my gloves, traveling upward further until my teeth clicked against each other rhythmically. I dared not look below, but I was not much for dares and decided to do it anyway only to find the ground racing toward me by the second. The rooftops were closing in around me like a prison, and I pulled the console in desperation for it to just push up a little higher. My heart beat thumped rougher and quicker until it was echoing into the chasm of my throat. I swallowed hard, inhaled even harder, and concentrated on the situation at hand.
Behind me, a posse consisting of a half dozen black rotary-cycles were closing in fast. Their riders hurled balls of rotating flame at me that whizzed by with enough ambient heat to nearly singe my facial hair. I quickly turned around and reached out toward them with an open palm, the brown glove on my hand made a hiss sound as several metallic coils and tubes released steam on the backside just below my knuckles. There, an orb sat in a translucent blue that faintly glowed in a glacial coolness, and each of the coils fed on that soft light in turn.
In my palm, a cone-shaped blast of spiraling ice forcefully spat outward and overtook three of the six assailants. The veins of frost spread rapidly over the front propellers and wings of their newer-model rotary-cycles before encroaching on the riders themselves.
They dropped to the ground in a three-pack of cold ones. Once hasty, humming machines now turned to silent blocks of ice that noiselessly plummeted until a loud thud echoed skyward. Violence was never my forte, yet if the moment called for it then I would answer tenfold. Still, I could not watch their meteoric fall to the cobbled streets, and I quickly turned back to the view in front of me. Their shouts a moment later told me that they had survived, luckily, and I left them in the wake of steam that puffed from the rotary-cycle exhaust.
“We need backup!” I heard one of my tag-alongs call out. “He’s got a Shiver Attunement!”
“Spread out around him!” Yet another joined in, this one had more of a bellowing tone like that of an opera vocalist. “Flank him from the sides! His junker of a cycle is going to drop at any time now!”
Gossamer & Thorns
On arrival at the Nilssons’ home, Kris could already smell the fragrance of almond cake. It was his favorite dessert, and they always made certain he had plenty of it when he stayed for supper.
Halfway to the door, Emilie emerged onto the front porch and held her hand out. “I’ve been waiting for you.” She wore a pale-blue sleeveless dress with ruffles on the shoulders. It clung to her slender frame, which seemed frailer than usual. Kris didn’t want to dwell on it, but it was difficult to distract himself from the truth as it glared at him.
He bowed his head as he gently took her hand in his, then placed a tender kiss to her knuckles. “And here I am.” Pulling back, he scanned the windows for spying parents, and when he saw nothing, he scooped Emilie into his arms. He squeezed her gently and peppered kisses along her temple. “I’m famished, but after supper we need to talk.”
Emilie closed her eyes as Kris continued to kiss every inch of her face, but when his lips connected to hers, she stiffened, then relaxed in his arms. Her soft lips tasted of almond cake and herbal tea. 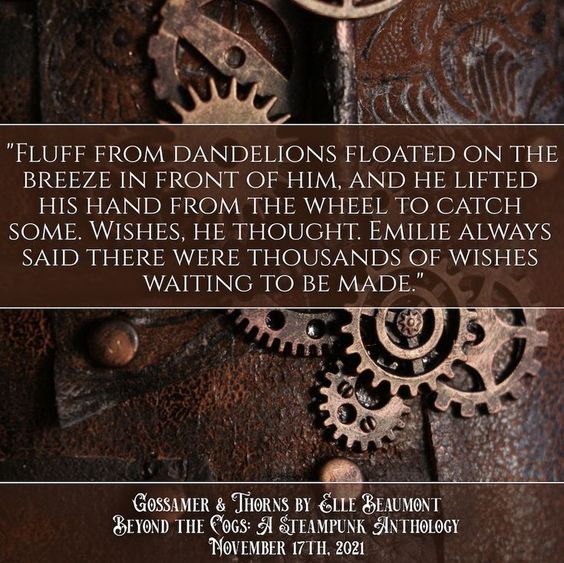 “Supper is ready,” she murmured against his lips and leaned in for another lingering kiss.
Kris shifted his jaw and sighed. “Very well.” His broad shoulders slumped as he took one slow step after the other.
Emilie laughed, tugging on his hand. “Come on.” She squeezed her fingers against his. “I’ve saved kisses for after dessert.” Glancing up at him through her lashes, she offered a teasing smile.
It was enough to twist his gut with desire. Kris longed to take her into his arms and claim every part of her as his own. To have her take his name, his body, as much as she took his heart.
“Damn good manners to the depths,” he proclaimed as he followed her into the house for supper.
* * *
By the time they’d finished eating, the sun had dipped below the mountains and the moon ascended to its throne amidst the velvet night sky. Stars twinkled like diamonds in light, mesmerizing Kris. Beside him on a blanket, Emilie leaned against him, staring up at the sky.
He dragged his knuckles down her cheek, then spread his fingers through her pale blond hair. The strands were like threads of moonlight against his skin—like gossamer. Just as his orchids were delicate, so was Emilie. And yet she was resilient despite what life threw at her.
“I spoke with my uncle.” Kris broke the silence. “He agreed to help find treatment. Sorensen Pharmaceuticals has a trial drug . . . ”
Emilie withdrew, twisting to face him. Instead of the elation he figured she might display, her brows furrowed in confusion. Almost as if she were displeased. “Kristoph, I don’t know.”
Goodreads ** Amazon ** Barnes&Noble ** iTunes ** Kobo

Authors' Giveaway
a Rafflecopter giveaway
Posted by CCAM at 10:58 AM

Eye catching cover, thanks for sharing!

The cover is eye-catching! Thanks for sharing.

Steampunk is my thing. Thank you

The excerpts are interesting. Thank you for sharing them.

Love the story lines of that book

I enjoyed reading the excerpts

The cover is beautiful! The stories sound great!