All of his brethren have perished - B Free (Rebel Cyborgs, #4) by Cynthia Sax 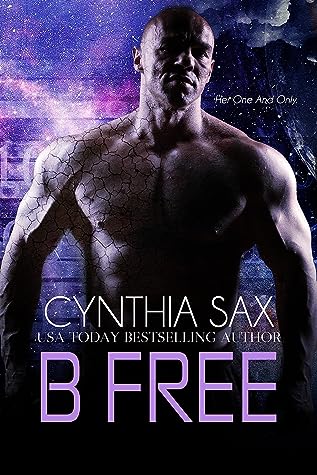 Description:
Release Date: November 16th 2021
B is the last remaining B Model cyborg. All of his brethren, the beings he trained with, fought with, cared deeply for, have perished.
Or so he believes.
When he intercepts a communication mentioning the existence of one of his kind, he has to investigate its source. The message could be a trap set by his enemies. He’ll take that risk if it secures him the companionship he requires to be fully functional.
What he finds is a daring brown-eyed female who activates all his systems. She proudly proclaims she’s a researcher, brandishing that information like a weapon before her. He wants to kiss the sass off her beautiful face, protect her from the dangers around them, claim her forever.
Quinn is on a quest to locate the mechanics of an early-version cyborg. She believes the information captured within that frame will give her valuable insights into the past.

When her mission goes zombie-like beings levels of wrong, she comes face-to-face with a living, breathing B Model. He has big hands, a primitive countenance, and stern hard lips crafted for kissing.
She doesn’t trust him. And she doesn’t have time to indulge her desires.
Their shared enemies are chasing them, would kill to get their precious specimens back. One minor mistake could reduce B and Quinn to a mere line in the databases of history.
***
B Free is a STANDALONE Cyborg SciFi Romance set in a dark, gritty, sometimes violent universe.
It features the sole surviving B Model cyborg warrior, a courageous researcher seeking to uncover the past, and an unplanned visit to a settlement ruled by an extremely scary all-knowing, all-powerful being.
B Free is the fourth of five core stories in the Rebel Cyborgs Series.
EXCERPT

Unable to process he was the last of his kind, B had searched for beings like him. There had been mentions of his model type in messages. He’d investigated every occurrence.

100.0000 percent of them had been futile chases, ghosts of brethren long dead.

He projected an investigation into this planet rotation’s message would be a waste of resources also. Heze 478 was a sparsely populated Humanoid Alliance-controlled planet, a leisure site for high-credit and influential humans in their organization, a place where they could get away from the horrors they’d inflicted. It wasn’t rational that they would situate a secret laboratory there.

It would be true to their devious natures to set a trap in that location for someone they correctly perceived as an enemy. He blew out his breath. They could be seeking to capture him, wanting to continue his torment.

A fully operational warrior would ignore the communication.

He wasn’t that being. B straightened to his full height and moved forward. His mechanics creaked. His body throbbed with an ache that matched the one in his soul. The rays of Mercury Minor’s single sun warmed his shoulders.

One of the humanoid females looked up, up, up at him. Her head tilted back. Her eyes widened.

She screamed, the sound piercing the chatter around her.

The other females turned. Their eyes widened also.

The crescendo of screams grew louder.

Fraggin’ hole. B stepped backward, seeking to disappear once more into the shadows. He wouldn’t hurt the females. They were under his protection, as was everyone on the cyborg-claimed planet.

But the females didn’t process that. All they saw was his huge form, his primitive B Model design. They had never viewed another being like him. He was different, and, to their gazes, scary.

That damaged him. He navigated a maze of less-utilized pathways, staying to himself, sticking to the darkness. The screams faded.

If there was a B Model force, he’d be the only one on it.

“Join us, B.” Odium, the leader of the E Model faction, gestured at him. “The C Models need your skills.”

The C Models objected to that. Loudly.

They didn’t need him, and he didn’t belong on either side. He was a relic. His model type had been completely replaced. He was redundant.

B shook his head and continued walking.

About the author:
For updates on characters and for very bad jokes, sign up for Cynthia's monthly newsletter.
USA Today Bestselling author Cynthia Sax is currently writing cyborg and alien romances with high heat levels. These stories are set in a shared dark, gritty, sometimes violent world. There is always a romantic happy ending between the main characters and this happy ending is FOREVER. But everyone else is in danger.
Her stories have been featured in Star Magazine, Real Time With Bill Maher, and numerous best of... top ten lists.
She loves writing fated to mate or instalove romances as this is her personal experience with love. She fell in love with her Dear Wonderful Hubby at first sight and 25 plus years later, they're still very much in love. This is what she wishes for her characters and for her readers.
Website * Goodreads * Twitter * Instagram * Newsletter
Author's Giveaway:
a Rafflecopter giveaway
Posted by CCAM at 9:00 AM

The book sounds really intriguing and the cover is fab too.

I love all the covers, they're similar but have different colors.

I just loved your excerpt and cover.