“This book will help you to escape the mundane world for a while, but it can do more than that. It can teach you the importance of love and the joys of serving others. It can do this all in the background while the story entertains you with its complex societies and a range of emotions to keep you reading.”—John M. Olsen, 2020-2021 President of the League of Utah Writers 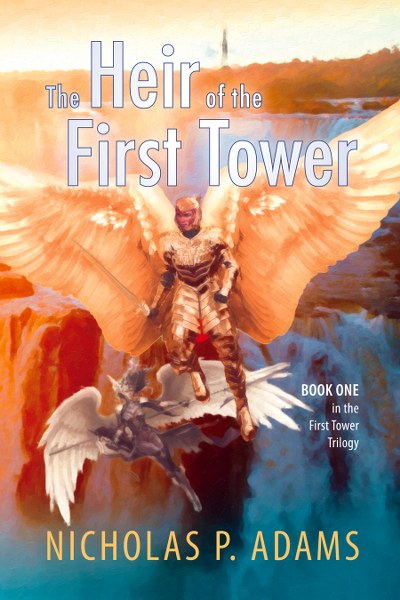 Description:
Set in Pirth’Vee Grah, a world where one stays on top of the food chain by flying higher than the creatures that would eat your wings as an appetizer, the technologically superior Ch’Hota and warmongering V’Jeeta clash over a precious resource while the altruistic Pra’Acheen takes neither side.
Forced to choose between the freedom to pursue a cure to White Claw, and his loyalty to father and flock, V’Jeeta High Prince—and budding alchemist—R'Venin must sacrifice more than he ever conjured before he can show his feathers in the Granite Spires again. And, after a lifetime hiding among the branches, Ka’Ala Ka’Ua—the last known survivor of the mythical Gir’Agit—is saved from solitude after she’s blown into the nest of strangers from the Bluewoods. The Windfather has her course laid out, but does she possess the faith to follow?
Can R'venin bring an end to the war and peace to the flocks? Can Ka'Ala trust the hearts of someone whose ancestors enslaved her own?
Only The Heir of the First Tower can answer these questions and more.
EXCERPT

R'Venin awoke with a start, groaning against the pain, as a million daggerflies raged war under the skin along his left side. He tried to sit up, but the assault increased with every attempt to shift his weight. With gritted teeth, he clawed at the cotton-like bedding, trying to reposition as his eyes darted around the room. With bleary vision, he took in his surroundings.

He found himself on an oval-shaped mattress suspended from a domed ceiling by four, thick braided vines, a half-wing above the ground. The round walls tapered upward until they met a circular shaft rising into the only visible source of light.

From directly overhead, a shaft of light gleamed down, casting a warm glow across his exposed skin. He looked down to find himself naked save for his breechcloth.

Moss-stained bandages squeezed his wounds. He tilted his head toward his gauze-encased shoulder and winced. Unwelcome tears filled his eyes from the scent of moldy vomit.

My clothes! My armor! My crown!

Panicked, he searched around the room until his eyes found a pile of black and red crumpled against the wall. Trails of dried green blood streaked the ebony surfaces.

The walls, at first glance, seemed to be made out of sun-bleached tree bark. But as R’Venin’s eyes focused, an interwoven root system coated with a layer of clay resolved from the blur. Rolling onto his side, he caught a glimpse of a lush grassy floor dappled with wildflowers reaching for the sunlight. R'Venin took in a quick breath as the daggerflies protested their nests' disturbance, while the woody scent of forest decay and pollen filled his nasal slits.

R'Venin went limp. He collapsed on the soft padding, kicking up puffs of dust that swirled and danced in the pillar of light. Relaxing, he let the fiery swarm go back to a dull buzz. Tipping his head against the mattress, he spied the portal to his little egg-shaped universe. A thick tapestry of purples and greens inlaid with dozens of four-pointed stars of varying sizes covered the entrance. The different points of each star displayed a unique symbol, four of which he recognized.

Mountain. Tree. Fire. Rain. The four elements of Alchemy. But, what's that fifth symbol in the center?

R'Venin closed his eyes and took a slow breath through his nose, filling his lungs with dusty air. Forcing his hearts to slow, he focused his ears on the sounds coming from beyond the tapestry. Metal clanging on metal. Wood clunking on stone. Mumbled, barely audible voices. Chanting.

"Where am I?" he whispered.

"You're awake," a raspy voice replied from beyond his view. "Good. We can finally begin."

R'Venin's head swiveled in every non-painful direction he could, looking for the one from which the voice had come but he spotted no one. The sound of stones dumped onto lush turf arose from underneath his suspended perch, followed by a grunt and the cracking of joints.

"Who are you? Where are you?" he called as his pulse raced. He returned his focus toward the tapestry again, watching for the fabric to move and reveal his visitor.

"Ah!" R'Venin jumped at the kindly voice suddenly coming from his left. His head spun while his body recoiled. "AUGH!" he screamed as the daggerflies renewed their sub-dermal warfare. He winced as he reached across with his right hand to grasp his other shoulder.

"Where am I?" He hissed through gritted teeth and watery eyes.

"You're in the sanctuary of The Three Mothers," said the maternal voice as he felt a light cloth wiping the sweat from his face. "Just relax. No harm will come to you here."

About the author:
I grew up in the small, rural town of Boring, OR with my six brothers and sisters.
After graduating from High School in Gresham, OR, I attended BYU-ID and received my Associate's Degree in Pre-Med. After that, I returned to Portland, OR, and attended Portland State University, where I earned my Bachelor's Degree in Biology/Pre-Med before changing my career track to Architecture.
I completed my second Bachelor's Degree in Architecture at Portland State University before achieving my Master of Architecture Degree from the University of Utah in Salt Lake City, UT.
After graduation, my wife and I moved to Phoenix, Arizona, where we adopted four children over the next eight years.
I currently live in the Salt Lake City area, where I am an Associate Member of the American Institute of Architects (AIA) and the League of Utah Writers.
My other interests include movies, singing, and motorcycles
Website * Facebook * Twitter * Instagram * Amazon * Goodreads
Author's Giveaway
a Rafflecopter giveaway
Posted by CCAM at 10:30 AM

Sounds interesting. Thanks for sharing!