An adventure of an after-lifetime - The Ascenders Saga Box Set Books 1-4 by C.L. Gaber 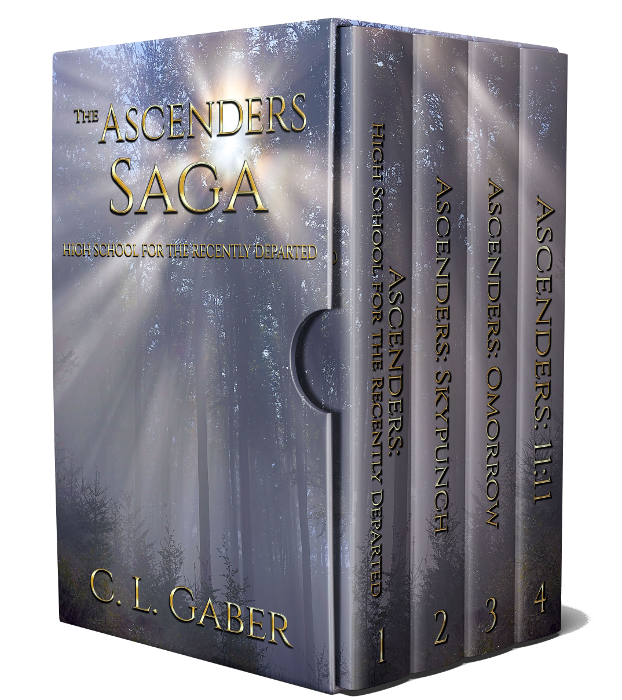 Description:
A spectacular tale of love, grit and redemption. An adventure of an after-lifetime.
For the first time ever, the four books in the #1 bestselling Ascenders Saga by C.L. Gaber are now available in a thrilling e-book boxed set filled with action, romance, demons and magic.
Walker Callaghan doesn't know what happened to her. One minute she was living her teenage life in suburban Chicago...and the next minute, she was in a strange place and in a new school with no homework, no rules, and no consequences.
Walker Callaghan, 17, is dead. She doesn't go to heaven or hell. She lands at The Academy, a middle realm where teenagers have one thing in common: They were the morning announcement at their high schools because they died young.
These high school kids are now caught in a strange “in-between” zone where life hasn’t changed very much. In fact, this special teen limbo looks a lot like life in a quaint Michigan town complete with jocks, popular girls and cliques. "There are even cheerleaders in death," Walker observes. It's not a coincidence that the music teacher is a guy named Kurt who "used to have this band." The drama teacher, Heath, is crush worthy because back in his life, he starred in some superhero movie.
Principal King explains the rules -- there are few. Why? You can't die twice.
There is no homework. No tests. No SATS. You're just there to learn because the human brain isn't fully formed until you're 24.
By the way, you can't get hurt physically, so race your Harley off that hillside. But falling in love is the most dangerous thing you can do ...because no one knows how long you'll stay in this realm or what's next.
Walker falls in love with tat-covered, bad boy Daniel Reid who is about to break the only sacred rule of this place. He's looking for a portal to return back to the living realm.
He needs just one hour to retrieve his younger brother who strangely never arrived at The Academy. Bobby is a spirit stuck at a plane crash site that took both of their lives as their rich father piloted his private jet nose-first into a cornfield on Christmas Eve.
Walker loves Daniel and risks immortality all to go with him.
TOUR SCHEDULE
Goodreads * Amazon

About the author:
I’m C.L. Gaber, an author and film journalist for the New York Times Syndicate and Chicago Sun Times. I also co-authored Jex Malone series. Originally from Chicago, I make my home in Nevada with my husband, bonus daughter and two unruly dogs.
My husband knows that Ascenders began with me in bathroom half the night writing on tiny notepads because I didn’t want to wake him. When daylight did roll around, I told him, ”Baby, I had the most incredible dream”.
Website * Goodreads * Facebook * Twitter * Instagram * Bookbub * Amazon
Author's Giveaway
a Rafflecopter giveaway
Posted by CCAM at 10:30 AM

Omg!! So want this. The series covers are amazing!

This series sounds fabulous and I really enjoy this genre.

Be nice for allbooks

The plot sounds fantastic. I really like the idea of The Academy and the rules that go along with it. Really interesting.

The plot of these books is very interesting and sounds like entertaining books.

It intrigues me to want to read the book.