for a peaceful future - A Blaze of Poppies by Jennifer Bohnhoff

"This story was epic and sweeping, going from the wild, open plains of New Mexico to the WWI trenches and battlefields in France. It kept my attention the whole way through - there wasn't any point at which I felt the story flagged - and I was very invested in the characters' fates." -Nancy, Goodreads 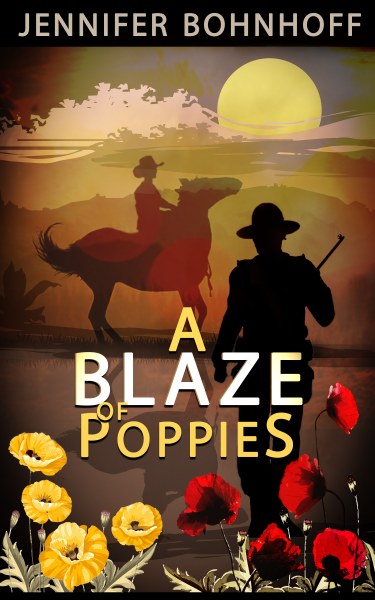 Description:
Published: October 2021
In 1916, Mexico is on the brink of revolution. Despite armed bandits streaming over the border and prejudices against female ranchers, feisty little Agnes Day is determined to keep the family ranch and run it on her own terms. The last thing she wants is to fall under the authority of a husband who will keep her from the land she loves.
Her ally in the fight is Will Bowers, a strong and silent New Mexico Guardsman assigned to nearby Camp Columbus under General Blackjack Pershing, but Will hides a dark and disturbed background that stops him from committing to any one or any place. Then the United States enters World War I and both Agnes and Will are swept into conflagration.
Can Agnes secure a peaceful future on the Sunrise Ranch after the insanity and bloodshed of war? Dare she hope to share that future with someone else?
GUEST POST
The Many Story Possibilities in Fort Bayard
I visited Fort Bayard back in the spring of 2018, when the ideas that eventually became my novel A Blaze of Poppies were just random ideas flitting around in my subconscious. Located in the foothills of the Gila mountains in southern New Mexico, Fort Bayard has a long history that touches on many of the wars that America has fought.

The Fort was named for General George D. Bayard, a West Point graduate who died during the Civil War Battle of Fredericksburg. Begun in 1866, the first fort consisted of crude adobe buildings thrown up by Buffalo Soldiers.in Company B the 125th United States Colored Infantry and tents. It was built to protect settlers from Apache raids. Many different Apache tribes lived in the rugged Gila mountains.
Fort Bayard was one station in a line of 24 heliograph stations. These relayed messages between forts by Morse Code, using the sun and a mirror. Because Apaches and outlaws could cut telegraph wires but not meddle with the sun, heliographs were the preferred method of communication at the time.
The man charged with establishing the heliograph stations was a young Second Lieutenant named John J. Pershing, who would go on to become the famous Blackjack Pershing. Pershing plays a role in the events in A Blaze of Poppies.
After the Indian Wars, Fort Bayard was no longer needed for military purposes. Its location in the clean thin air of the mountains led it to become the first military sanatorium for the treatment of tuberculosis. During World War I, the period when A Blaze of Poppies is set, it also housed soldiers who had suffered from poisonous gas attacks. 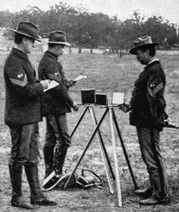 Writers of historical fiction must not only know the events that took place during their story’s time period. They must also understand the society at the time. The early 20th century was a time when women were not considered intellectual equals of men. They had not yet been granted the right to vote, and there was a general sense that they needed to be protected. While I was visiting Fort Bayard, I learned that a matron lived in the nurses' quarters. This matron was responsible for the moral well-being of the women who tended the sick and injured. Strict curfews were enforced, and nurses and patients were not to have any contact outside of that needed for their care. During World War I, the nurses’ quarters were relocated farther away from the other buildings because too many nurses had fallen in love with their patients. This little tidbit of history got me thinking, and is one of the reasons that Agnes Day, the protagonist in my novel, receives her nurse’s training here.
During WWII, German Prisoners of War lived here, repairing buildings, tending the orchard, and caring for the burial grounds that became a National Cemetery in 1976. The fort continued to serve as a long-term care facility for veterans and civilians alike after it was transferred from Federal to State control in 1965. Finally, in 2010, a more modern medical facility was built just down the road.
At the time I visited ​Fort Bayard, I marveled at the beautiful, mountainous setting, with wide, blue skies and big vistas. The buildings were in disrepair, but were filled with suggestions for historical narratives. I thought it could be the setting for a "wild west" story, a love story between a young gas victim and a nurse, or a story of longing for home by a young German POW. I’ve used it for A Blaze of Poppies. Perhaps I’ll use it again, for another story set in another time.
TOUR SCHEDULE
Goodreads * Amazon

About the author:
A lifelong New Mexican, Jennifer Bohnhoff loves travel and history, so it should come as no surprise that many of her books are historical novels set in beautiful or interesting places.
She taught Middle School Language Arts and New Mexico History for years, but has left to become a full time author. She loves helping people reach that "ah hah" moment when they suddenly understand the connections between themselves, the past, eternity, and the world around them.
Mrs. Bohnhoff is the mother of three handsome men, the mother-in-law of three beautiful daughters and the grandmother of three very smart granddaughters and one grandson. She lives in the mountains of central New Mexico with her husband, Monstro the wonder dog, and a petulant stinker of a cat who cares nothing for her writing.
Website * Facebook * Twitter * Bookbub * Amazon * Goodreads
Author's Giveaway
a Rafflecopter giveaway
Posted by CCAM at 1:49 PM

Sounds really interesting. Thanks for sharing.

I enjoy historical novels. I always learn something new.

Sounds interesting!
I plan to read it whether I win or not!
... still hope I win.
Best wish all!

Looks like an interesting book.
Thanks for the contest.

This sounds like a book I will really enjoy reading.