"This was a very sweet romance story. It was also a quick read. The characters were lovely and friendly." - Gladys, Goodreads 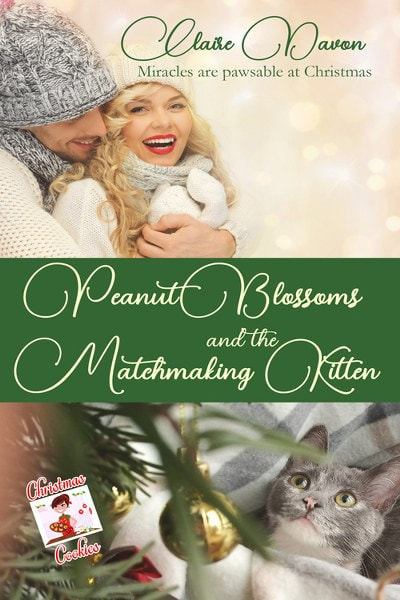 Description:
Oriana's first Christmas away from her family promises to be a lonely one—until a two-pound bundle of kitten trouble shows up! When the kitten's owner, her neighbor Jet, takes Oriana under his wing, she tries to tell herself that he would do this for anyone, but she can't help but hope for more.
Will she find her Christmas miracle at the paws of a mischievous kitten? Or will the holiday be as lonely as she anticipated? She expects the latter but wishes for the former. Anything is possible at Christmas.
EXCERPT
“Meow.”
The grey and white cat rubbed against my leg and then tried to climb up it. His sharp claws dug into my calf. I bent down to remove him from my flesh at the same time someone knocked on my door.
“Who is it?” Scooping up the kitty I tucked him in the crook of my elbow as I went to the door.
I peered through the peephole and my breath caught. Standing outside my door was a delicious hunk of man. He had a tousled, distracted air and was sweaty. His sweatpants and sneakers suggested he had been running. I hadn’t heard him leave, but the apartments that direction were near a back staircase.
“It’s Jet. Your neighbor. Sorry to be a bother. Your light is on so I’m hoping I didn’t wake you. I’m looking for a cat. Did you see one by any chance?”
Good looking men made great criminals. “Describe the cat.”
His smile even through the distortion of the peephole could have lit a hundred women on fire.
“The rascal is grey and white. Got a purr like a freight train and a bit of grease on his tail from where he was stuck in the car engine.”
Trusting strangers was how people died. “How do I know you’re my neighbor?” The cat wriggled and I let him jump down. He scurried to the kitchen and tried to leap onto the counter, but missed. He bounced and then straightened, shaking his body before he started grooming himself.
“I reckon you’re right. Can’t be too careful. Back in a jiffy.”
I glanced at the cat as his footsteps retreated and then returned.
“Here.” Something slid under my door. A driver’s license. It bore an awful picture of the man I had seen in the peephole and identified him as Jethro Tallans, resident of my apartment complex.
“I guess you are who you say you are.” I reached for a spoon anyway, just in case.
“Yes ma’am. Have you seen my cat?”
I kept the spoon at the ready and opened the door.
The kitty paid him no attention when Jethro stepped inside, but I did. All my senses roared to life at the incredible 6’2” specimen of man. His hair was brown with streaks of red and his eyes were the kind of color people called hazel. He had a marvelous body with wide shoulders that begged to be leaned on. His legs…well…I could imagine them on mine.
I stared at him for a beat too long. A smile tugged at Jethro’s lips. He held out his hand for his license. I handed it back to him, my cheeks reddening in the quiet.
“Jet?”
“My uncle is named Jethro. I don’t cotton to the name. Been Jet all my life.”
He had a faint twang that placed him somewhere down south, but I didn’t know a Texas accent from a Louisiana one. I’d been told they were different.
“Hi, Jet.” I put the spoon down and offered him my hand. “I’m Oriane. Is this your kitten?”
“Meow. Meow.” The kitty clawed at my ankle and I swooped down to grab him. Jet held his hands out for the cat and I deposited him in his hands.
“Yes ma’am. This rascal’s mine, at least for now.” He gave the kitten a scratch and the loud purr that accompanied the caress rumbled through its small body. “Two days ago, I was at the mall and I heard meowing. He must have crawled into the pickup’s engine and fell asleep there. Guy who owned the car barely gave me time to get him out. He blazed out of there as soon as I freed the scamp.”
Good looking and he rescued animals. I had to fight to keep from swooning right then and there.
“How did he get into the hallway?”
Jet gave a rueful, lopsided grin that just about had me turning to mush. “He slipped outside when I was fixin’ to go on my run.” He gestured toward my front door. “Scared me to death when I came home and couldn’t find him.” His relieved smile told me that he was telling the truth.
“I’m glad he’s okay. You’ve got an escape artist on your hands.”
“I know.”
“What are you naming him?” I doubted he would keep the kitten but maybe he would find it a good home.
“I should call him hellion but I’m thinking Buster. I have a feeling he’s going to be busting a lot of things.”
We were winding down on small talk and I had to let him make a graceful exit. Even though I didn’t want to.
“Buster. You’re one lucky cat Buster. Jet, it was nice to meet you. I should let you get this crazy feline back to your place.”
Jet gestured to the cookie makings on my counter. “And I’ll let you get back to whatever tasty treat you have there. Nice to meet you, neighbor. Oriane. You know where to come if you need to borrow a cup of sugar.” His eyes twinkled and it was all I could do to keep from passing out.
“I suppose I do.”

About the author:
Claire can’t remember a time when writing wasn’t part of her life. Growing up, she used to write stories with her friends. As a teenager she started out reading fantasy and science fiction, but her diet quickly changed to romance and happily-ever-after’s. A native of Massachusetts and cold weather, she left all that behind to move to the sun and fun of California, but has always lived no more than twenty miles from the ocean.

In college she studied acting with a minor in creative writing. In hindsight she should have flipped course studies. Before she was published, she sold books on eBay and discovered some of her favorite authors by sampling the goods, which was the perfect solution. Claire has many book-irons in the fire, most notably her urban fantasy series, The Elementals’ Challenge series, but writes contemporary and shifter romances as well as.

While she’s not a movie mogul or actor, she does work in the film industry with her office firmly situated in the 90210 district of Hollywood. Prone to break out into song, she is quick on feet and just as quick with snappy dialogue. In addition to writing she does animal rescue, reads, and goes to movies. She loves to hear from fans, so feel free to drop her a line.

U love the cover, synopsis and excerpt, this is a must read for me. Thank you for posting about this book

Sounds like a delightful read and I can't wait to read it! Thanks for sharing it with me and have a holiday season!

Hello everyone and thanks for your kind words!

I think the book sounds amazing and love the cover