a mesmerizing tale of forbidden romance as deadly as... Fire and Ice (Faerie Song Saga #1) by Michele Barrow-Belisle

"I recommend this to any reader who likes fae, Sidhe and the fantasy realm. I don’t read many books twice, you should see my tbr pile, but I can honestly say that I would read this one again and I hope that the author comes out with a followup." - Marni. Goodreads 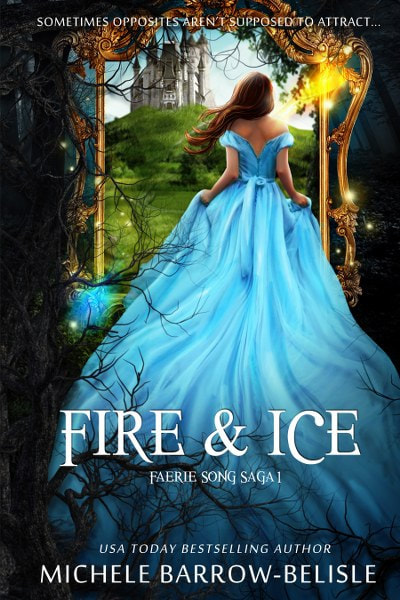 Description:
From USA Today Best Seller Michele Barrow-Belisle comes a mesmerizing tale of forbidden romance as deadly as fire and ice.
Lorelei knows nothing of Faeries or their dangerous bargains. But when she’s gifted two talents--music and healing--by the dark Faerie Zanthiel, she’s irrevocably convinced the Fey are real. Preferring invisibility over attention and fame, she shies away from her other-worldly abilities.
Until Adrius storms into her life.
The stranger with a dangerous mystique, and eyes that seem to see into her soul, turns up everywhere and knows more about her than any newcomer should. Including the condition of her mother, who is suffering from a mysterious illness neither modern medicine nor Lorelei’s gifts can cure.
Accepting his help to save her leads Lorelei into a thrilling world of Witches, Elves and Fey where nothing is as it appears. Even Adrius, whose feelings for her balance precariously between desire and danger, seems to be hiding behind half-truths. Yet, despite her better judgment, Lorelei can’t stay away.
And that proves to be her fatal mistake.
Ancient prophecy speaks of one who will prevent war between witches and faeries. Now, trapped in the Faery realm, Lorelei must find a way to fulfill the fated prophecy, or forfeit her mother’s life.
Time is running out, and the invisible tether binding her to Adrius and Zanthiel draws her deeper into their world. When crossing over might mean never coming back, can Lorelei find a way to save her mother? Or will one pivotal mistake put the fate of their world, and her soul in jeopardy?
SNIPPET:
Adrius had been struggling to pull away since I’d first arrived in his world. The effort took so much out of him, out of us both… I knew it was inevitable we would give into our compelling need for one another. It was only a question of when.
In that moment, folded in the warmth of his arms, I understood this was why I was here. Why we were here together. He was in pain. And his pain hurt me also, because it was a pain I somehow caused, and yet one I couldn’t heal. Adrius was a part of me. We were connected in ways I couldn’t explain or even fully understand. All I knew was when he hurt, I hurt, and I would do anything to make it go away; to fill the ache that set in when we were too far apart… or too close together. In so many ways we were already bound, and nothing, not even death, could change that now.
TOUR SCHEDULE
**Only .99 cents!!**
Goodreads ** Amazon ** Apple ** B&N ** Kobo

About the author:
Author, artist, teacher, lover of chocolate…Michele Barrow-Belisle has always lived with one foot in the real world and one foot in the imaginary. So, it follows that she would grow up to write about characters from those enchanting worlds she knows and loves so well.
As a fan of romanticizing the mundane, Michele’s young adult novels are populated with scintillating Witches, Elves and Fey, and her illustrated children’s books reflect her otherworldly imaginings. Her bestselling debut series Fire and Ice (Faerie Song Saga) is currently in development for a major motion picture.
Michele is a USA Today bestselling author, residing in southern Canada with her husband and son who indulge her ever-growing obsession with reading, writing and most importantly… chocolate.
Website * Facebook * Twitter * Instagram * Bookbub * Amazon * Goodreads
Author's Giveaway
a Rafflecopter giveaway
Posted by CCAM at 11:20 AM

Ohh definitely going on my tbr