"I don’t have any idea how Ms Kent can continue to come up with original storylines after so many books in this awesome series, BUT SHE DOES!! [...] It’s another amazing book in an amazing series!!" - StephanieV., Goodreads 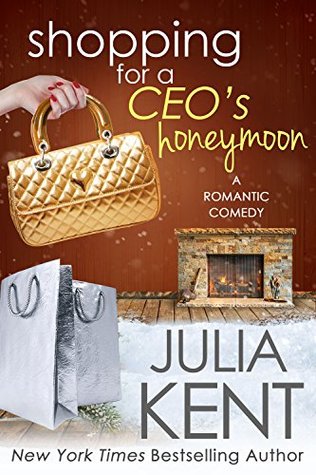 He says we never had a proper honeymoon.

So, instead, he’s giving me… a prepper honeymoon?

Who knew billionaire preppers were a thing?

I guess I’m about to find out.

Julia Kent’s New York Times bestselling romantic comedy series continues in Shopping for a CEO’s Honeymoon as Andrew and Amanda settle into married life… and so much more.

I am eating a piece of grilled white asparagus wrapped in prosciutto, drizzled with melted manchego cheese and coated in crushed pistachio, when my friend and co-worker Josh ruins my culinary orgasm by bringing up my honeymoon.

More specifically, my lack of a honeymoon.

And all I can do is grunt.

“I’m just saying,” he says with a sigh as he waves his bacon-wrapped, goat-cheese-stuffed date around on its toothpick like he’s the conductor of the Boston Pops doing a tapas bar gig, “you married a freaking billionaire. You deserve a honeymoon.”

“It’s not about what Amanda does or doesn’t deserve,” Carol insists on my behalf. As I chew, I give her a look that either says thank you or is so indecent, I need a cigarette and a fan, because damn, that asparagus is good.

“It’s about what they want. I mean, my God, Josh! Andrew bought her an estate as a wedding gift. I think he’s got all the good-husband bases covered.”

“Pfft. That? He’s a billionaire! That’s to be expected.”

“You’re pooh-poohing my husband’s gift to me? An estate in Weston, Massachusetts? It’s one of the most expensive zip codes in the country,” I say, parroting his affect.

“Hello? Billionaire? For him, that’s like buying a cheap condo behind the railroad tracks in Clinton. Declan bought Shannon an entire coffee chain.”

“This isn’t a competition,” I say, alarm making my pinot noir taste like vinegar.

“And he managed to give her a nice honeymoon in Hawaii.”

I lean in. “Define nice. Because those two still refuse to talk about their honeymoon.”

About the author:
New York Times and USA Today bestselling author Julia Kent writes romantic comedy with an edge. Since 2013, she has sold more than 1.5 million books, with 4 New York Times bestsellers and more than 16 appearances on the USA Today bestseller list. Her books have been translated into French and German, with more titles releasing soon. From billionaires to BBWs to new adult rock stars, Julia finds a sensual, goofy joy in every contemporary romance she writes. Unlike Shannon from Shopping for a Billionaire, she did not meet her husband after dropping her phone in a men's room toilet (and he isn't a billionaire). She lives in New England with her husband and three children in a household where the toilet seat is never, ever, down.
Website ** Goodreads ** Facebook ** Twitter ** Instagram ** Bookbub** Newsletter ** Amazon Author Page
Author's Giveaway
a Rafflecopter giveaway
Posted by CCAM at 9:19 AM

Thanks for sharing guys & good to have you back!

I would love to read your book and I just love your cover.

I love the cover, this sounds like a fun book.

I can't wait to read your book! Thank you for your giveaway!