when you have nothing left to lose… - Flipside! Jessalyn's Story by Leia Madison

Cover Reveal "If it wasn’t for Skyler, I most likely wouldn’t be the person I am today. Besides Addison, he is the only one that knows the real story of where I came from and how I survived. Sure there are loads of crap rumors and shit stories but it’s a small town and that goes hand in hand. It’s not a tiny town just small compared to Milwaukee where my Uncle Joe lives." 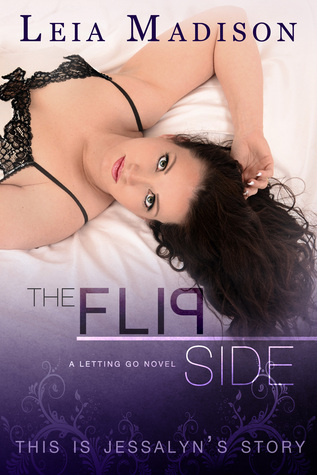 Born to a prom queen, turned heroin dealer, that turned tricks for her next high, Jessalyn Rumley has lived a life that most people would say is too far-fetched to be true.

Getting pulled into fights between her mother and that monster, left Jessalyn knowing that she would be covering up bruises for days to come.

Her one saving grace from her tormented, hell storm of a life, was her Grandmother. She was her safe haven. A place where the whispers and stares from the town could never touch her.

A place where she learned, that sometimes in life, when you have nothing left to lose… the best way to change… is on the Flipside…

Watching my best friend Addison of over twenty years dance with her new fiancée, I feel my heart bursting with love and pride for her. She was never meant to be with Curt, I knew from the moment he started charming his way into her life in high school, he was bad news. But… this man… this beautiful, tall, commanding man, Michael Crestmoore, that’s her soul mate. He looks at her like a man in love, a man that will always cherish her and love her no matter what. You can always tell looking at a man when he is in love. His face will have a softness to it, a glow if you will, and his smile will reach his eyes just by looking at her.

I feel Skyler’s fingers lightly dance over the back of my neck and I know he is thinking the same thing. My husband of fifteen years Skyler Gauge Rumley is the love of my life. Sandy brown hair that at one time… was thick and lush but, add one crazy ass wife and two kids later, you get a sexy receding hairline. Blue-green eyes, and a body built like a brick shit house he’s 6’3 and 240 but he is a big Teddy bear to our kids and a sex machine for my love pocket.

If it wasn’t for Skyler, I most likely wouldn’t be the person I am today. Besides Addison, he is the only one that knows the real story of where I came from and how I survived. Sure there are loads of crap rumors and shit stories but it’s a small town and that goes hand in hand. It’s not a tiny town just small compared to Milwaukee where my Uncle Joe lives.

Joe is the brother of my dead birther, Renee Sarah Allen. I say birther because she was neither a mom or mother not even a parent really, just a junky… loser… waste of life. That may sound cruel, but it’s the truth. She used before she was preggers used during her pregnancy and as soon as she shit me out she was back on the pipe three days later. That’s what my Grammy told me anyway.

My grammy, Evalyn Louise Grace was loved by everyone in town. She is the mother of the sperm donor. His name was Joel Robert Grace A.K.A fucktard. She tried several times to save him but… like my birther he wasn’t worth saving. Grammy took in my Uncle Joe when it was “accidently” revealed that he was gay and the Birthers family shunned and shamed him. She loved him, protected him and made sure he knew what a real family does for one another.

Most days are easy peasy and I get along just fine, but… there are the days that I think back on the birther and sperm donor and wonder why, why were the drugs more important? Why was I just a bother? I just wanted a normal family, a loving Mom and Dad. I wanted to go shopping with a Mom and fishing with a Dad, but, my fate was not that. When my life turned tragic, it was in those minutes, those hours that I knew… I knew MY life would change… and I made a promise to my future children that I would never make them feel hopeless, lost or broken. They would however feel loved, protected and never afraid.

Goodreads
About the author:
Leia is from Iowa where she resides with her Husband and beautiful daughter. She has a spoiled yellow lab, drama queen papillion and an old grouchy cat. She loves to swim and ride bikes, both of the motor and pedal version. She is an avid fisher-woman and gardener.


Cover Reveal organized by : SBB Promotions
Posted by CCAM at 8:45 AM