18++ Water. I closed my eyes and imagined holding a cool glass of water and chugging it back; the liquid sliding down my throat, coating the harsh dryness. I’d never thought about the daily bottles of water I’d consumed, but now … now it was all I thought about. “I’m not letting you die, damn it.” His voice was harsh and abrupt and yet to me it was soothing. 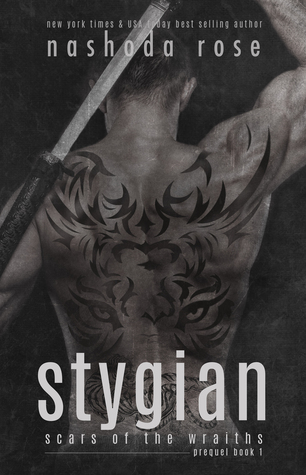 There are three full-length prequels to TAKE (scars of the wraiths). This is book One.
All three prequels were previously published and have been re-written entirely and are now in multiple first person POVs.
Stygian was originally entitled JUMP.

Danni: Mortal
I remember nothing of my abduction two years ago. Sounds and scents trigger horrific flashes, but it’s all a blur except for one man with brilliant green eyes. When the tatted six foot two Adonis shows up at my door, my knowledge of the world is shattered.

Bound to the immortal Scar by an ancient spell, we are on the run. Because Balen is the hunted.
And if he dies, so do I.

Balen: Scar Tracker
My code of honor was respected without question … until I consumed the blood of a vampire in exchange for a mortal woman’s freedom.
The Scars want me imprisoned. The Wraiths want me dead.
But the woman I can’t forget needs me. And I’ll risk everything to protect her.
Even if it means killing her.
Because in order for her to live—first she must die.

Full-length novel. Come meet the Scars.
Scars: Immortal warriors with capabilities derived from the senses: Trackers, Sounders, Healers, Tasters, Visionaries, and the rare Reflectors. They each have what is known as an Ink, a tattoo that can be called to life.


Feelings are a luxury I can’t afford. Hidden behind a shield of quiet placidity, I keep my secret safe from those who’d use it against me. Until him—the tatted up, self-centered Scar assassin hired to protect me.

He takes pleasure in tormenting me, chipping away at my defenses as if I’m a toy to be played with. I hate that he continuously reminds me that I’m nothing more than a job. I hate that my body responds to his touch. I hate him.

JASPER
I’m not a good guy and I don’t pretend to be. Condemn me if you want, I don’t give a fuck. You’re nothing to me. No one is … except her—Max. She’s my target. And I was hired to do a hell of a lot more than protect her … I was hired to kill her.
It should’ve been simple, but it was complicated as hell.

About the author:
Nashoda Rose is a New York Times and USA Today bestselling author who lives in Toronto with her assortment of pets. She writes contemporary romance with a splash of darkness, or maybe it’s a tidal wave.
When she isn't writing, she can be found sitting in a field reading with her dogs at her side while her horses graze nearby. She loves interacting with her readers and chatting about her addiction—books.

Author's Giveaway a Rafflecopter giveaway
Posted by CCAM at 6:00 PM