Exiled from the Anathema MC, Brew Darnell escaped the bullet only to face the unforgiving solitude of the road. With no future before him, Brew battles his past and vows to protect the one he loves the only way he can—by hunting the man who destroyed his family, devastated the Anathema MC, and betrayed every promise he ever made. 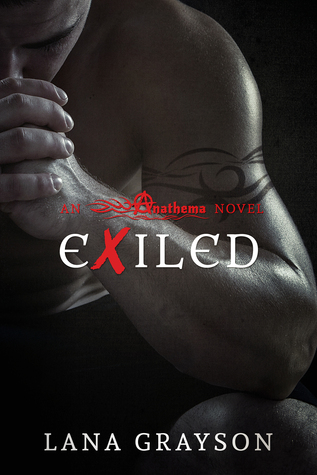 Excommunicated…
Exiled from the Anathema MC, Brew Darnell escaped the bullet only to face the unforgiving solitude of the road. With no future before him, Brew battles his past and vows to protect the one he loves the only way he can—by hunting the man who destroyed his family, devastated the Anathema MC, and betrayed every promise he ever made.

Saved…
Trapped in an abusive relationship with a sadistic biker, Martini Wright learned to manipulate, controlling her boyfriend’s temper with a wink and a smile until she’s traded as collateral to a rival MC. Her captor, Brew, has never trafficked a woman before, and Martini intends to exploit his guilty secrets to escape. Caught in the middle of a gang war, Brew and Martini fight a dangerous attraction—a second chance to heal from the mistakes of their past if they can confess the terrible truth.

Redeemed…
Brew failed his family before, but Martini can still be saved. With redemption delivered at the edge of a blade, Brew must choose who to rescue—the one he already lost…or the love he never deserved.

GUEST POST
Biker…Romance? How can a motorcycle club story be a romance?

I get that question all the time.

I won’t lie. Exiled is a pretty grim book, and my first novel, Warlord, was no walk in the park either. The dark and gritty life of a motorcycle MC isn’t normally the setting for romance. Instead of rolling Scottish highlands or the sleek penthouses of New York City, MC Romance gives us oil-stained garages, cheap motels, and lots of time spent on the road.

The lifestyle is a hard one full of blood, muscle, and betrayal, and I think that’s why I love it so much. The stories focus on an aspect of life outside our normal society but beyond what we like to imagine with billionaire and royalty romances. The MC isn’t just a character trait for the hero—it’s a way of life, a setting, and a living, breathing representation of his strength and toughness.

Bikers are the definition of alpha. They’re powerful enough to live outside the normal conventions of the law and morals, but they still uphold a rigorous code of honor that binds them to their brothers and cause. In terms of romance and escapism, you can’t go wrong with the sexy, brooding hero facing the open road and all the bloodshed and mayhem that comes from tracking his enemies and serving the brotherhood he loves. Throw in a heroine with a secret or some past nightmares, and that dedication to the MC can mirror in his protection and love of her. It’s a perfect combination.

But I do get a couple weird looks when I describe when I write, even from my own family. Bikers and Motorcycle Clubs have a well-known reputation for being dangerous and frightening. But that element of risk is the perfect setting for a beautiful romance. Amid the violence and revenge, aggression and pride, the passion between the heroine and the toughened, grizzled warrior is brought to life. The danger intrigues us, the suspense entertains us, and the romance…well, these men aren’t afraid to use their strength and skills to take their women.

MC Romance is just a fun genre to experience—all the danger without messing your hair up with a helmet. It’s one of my favorite to write, especially as it blends action, suspense, and all the passion of dark romance with a unique setting. If you haven’t tried one, know they aren’t for the faint of heart, but for pure pulse-pounding excitement and super sexy romance, you won’t find a better read out there.

About the author:
Lana Grayson was born to write romance. Her favorite genres range from the dark and twisty to the lighthearted and sentimental—as long as the characters are memorable, the story is fun, and the romance is steamy. Lana lives in Pittsburgh with her husband, and, when she isn’t bundled in her writing chair, she’s most likely cheering on the Steelers or searching for the ‘Burgh’s best Italian restaurants.