Magic is fraught with peril—but so is love. - Lady of the Flames (A Most Peculiar Season #3) by Barbara Monajem

Lord Fenimore Trent’s uncanny affinity for knives and other sharp blades led to knife fights, duels, and murderous brawls. Five years ago, he faced a choice: marry Andromeda Gibbons, the woman he loved, or find a safe, peaceful use for his blades by opening a furniture shop—an unacceptable occupation for a man of noble birth. 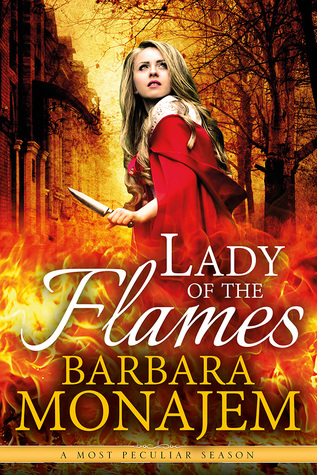 Magic is fraught with peril—but so is love.

Lord Fenimore Trent’s uncanny affinity for knives and other sharp blades led to knife fights, duels, and murderous brawls. Five years ago, he faced a choice: marry Andromeda Gibbons, the woman he loved, or find a safe, peaceful use for his blades by opening a furniture shop—an unacceptable occupation for a man of noble birth. The choice made itself when Andromeda turned to another man. The furniture shop prospered, but now Fen’s partner has been accused of treason. In order to root out the real traitor, he may face another unpalatable choice—to resort to the violent use of his blades once again.

Once upon a time, Andromeda Gibbons believed in magic. That belief faded after her mother’s death and vanished completely when Lord Fenimore, the man she loved, spurned her. Five years later, Andromeda has molded herself into a perfect—and perfectly unhappy—lady. When she overhears her haughty betrothed, the Earl of Slough, plotting treason, she flees into the London night—to Fen, the one man she knows she can trust. But taking refuge with Fen proves to mean far more than getting help—it means learning to believe in love, magic, and the real Andromeda once again.

Andromeda’s eyes widened, but mercifully she was too exhausted to try any of her wiles on him. Not that she seemed so inclined at the moment, but earlier, when their eyes had met for a few seconds, he’d wondered. Oh, how he remembered kissing and licking those lovely feet—and stopping right there, for if he hadn't, his tongue would have wandered elsewhere and feasted indeed.

He knew for certain that she remembered it, too.

But he also doubted that she could undress by herself. “There are no women here, so I suppose I’ll have to unlace your stays.” He knew he sounded surly but couldn't help it. Time was when he’d wanted nothing more than to love this woman forever.

“If you don’t mind,” she said stiffly, standing up, hissing as her injured feet touched the rug. She pulled a small reticule from the top of her stays and set it on the dresser. “If I can put up with it, surely you can, too.”

He swore under his breath and went behind her to undo the hooks at the back of the gown. Quickly, he unlaced her stays and stood back. “I’ll give you something of mine to wear. It’ll be too big, but you need more than a shift.” He went over to his chest of drawers, pulled out a nightshirt, and tossed it onto the bed.

This would not be comfortable or easy, but they both had to sleep. “There’s a chamber pot under the bed. I’ll be back in a few minutes.” He went to the door. “Call me when you’re ready.”

“To go to bed.” She frowned, and he added, “When you've changed into the nightshirt and used the chamber pot and done whatever else you have to do. There’s a hairbrush on the dressing table if you need it.”

“Very well, but why would I call you?”

She was already pale with fatigue, but now she went stark white. “You can’t come to bed…in here…with me!”

Considering the way she’d thrown herself at him five years ago, this should be hilarious. It wasn't. It made him want to swear and throw things. “I have nowhere else to sleep.”

“One, but it belongs to my valet.”

“No settee? No sofa?” She clenched her small fists.

“Only chairs. And before you ask, we’re out of sofas in the shop, too.” A damned good thing, because he didn't relish sleeping in the showroom for all his workers to find in the morning. “I need what little sleep I can get. The next few days are going to be hell in too many ways.”

If she took that as an insult, so be it. She put her hands on her hips and tried to look fierce, but her lip trembled.

He relented a little. “Don’t be a fool, Andromeda. We’re not going to do anything we shouldn't.”

She narrowed her eyes. “No, we certainly are not.”

Lord, what a fiasco. “Then what’s bothering you?”

“I won’t be able to sleep at all if you’re naked!”

He burst out laughing. Was that all that bothered her?

“It’s not proper,” she shouted, crimson with rage. The fire crackled, sounding as angry as she. “It’s not right!”

“Just because I’m now completely ruined doesn't mean I should be treated like a trollop.”

Where had she got that idea? He’d thought he was treating her rather well. “I won’t be naked, you idiotic girl,” he said. “I’ll wear what I have on now.”

“In case you have forgotten,” he said between his teeth, “it’s my bed, and I don’t want you there, either.” He lit a candle from the branch on the dresser and went to the door. “But unless you wish to sleep on the floor, that’s the way it will be.” He left the room, shutting the door behind him.

Barbara Monajem grew up in western Canada. She wrote her first story, a fantasy about apple tree gnomes, when she was eight years old, and dabbled in neighborhood musicals at the age of ten. At twelve, she spent a year in Oxford, England, soaking up culture and history, grubbing around at an archaeological dig, playing twosy-ball against the school wall, and spending her pocket money on adventure novels. Thanks to her mother, she became addicted to Regency romances as well. She is the award-winning author of several Regency novellas, many of which include elements of magic, and the Bayou Gavotte series of paranormal mysteries. Apart from writing, she loves to cook (especially soups), and the only item on her bucket list is to be successful at knitting socks (which she doesn't expect to achieve). She lives near Atlanta, Georgia, with an ever-shifting population of relatives, friends, and feline strays.

Thank you for hosting LADY OF THE FLAMES!

The excerpt was very interesting and the cover is fantastic.

I read the excerpt and now I have to read the book. I just hope there's no knives in the bed! lol :)

I think the cover is gorgeous. I can't wait to read this.
Thanks for the giveaway! =)

I think it sounds and looks great! :)

i love the blurb and the cover
thx u for hosting :)

Hello, I love the excerpt and the cover, thanks for holding the giveaway.

love the cover! best of luck with this release.

Thanks for posting about Lady of the Flames. :) And thanks for all the lovely comments.

love the cover and the excerpt :)

The book sounds really interesting, and i really like the cover.
Thanks for hosting the giveaway.

love the cover. thank you!

Love the colors used for the cover!