There are things that go bump in the night - A World Apart (Shades Below, #1) by Laura Oliva

Private investigator Jesper MacMillian was sure he'd seen it all. After all, in a city like San Francisco, strange is what's for breakfast. Following a long recovery after a horrific accident, his life is finally the way he wants it- or at least, close enough. The only monsters on his radar are the ones that keep him awake at night. 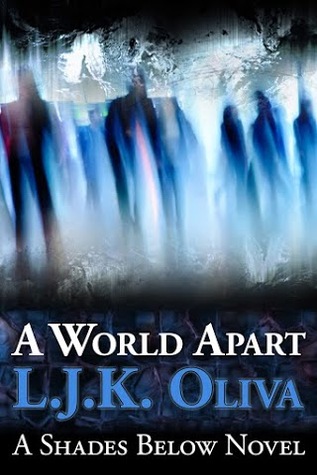 "There are things that go bump in the night, Mr. MacMillian. It's my job to bump back."

Private investigator Jesper MacMillian was sure he'd seen it all. After all, in a city like San Francisco, strange is what's for breakfast. Following a long recovery after a horrific accident, his life is finally the way he wants it- or at least, close enough. The only monsters on his radar are the ones that keep him awake at night.

All that changes the day he meets Lena Alan.

Before MacMillian has a chance to brace for impact, Lena drags him into a world where monsters aren't just real, they're hiding in plain sight. Suddenly, everything he knows is suspect, starting with his current case. For Lena, a medium since childhood, it's just another day at the office.

For MacMillian, it's the beginning of the end of everything he thinks he knows.

"Everything has been thought of before... the problem is to think of it again." - Johann Wolfgang Von Goethe

I was asked an interesting question the other day.

I was out with a couple friends and another woman I had just met. Upon finding out I write urban fantasy, she turned to me, a curious expression on her face. "But hasn't everything already been done?" she said. "How do you come up with anything new?"

It's a fair point.

I love fantasy. I've read it for years. Until recently, however, I've shied away from writing it myself. What could I possibly add to the many fantastical worlds and mythologies already out there? It's all been done before.

A brief stroll through pop culture monsterology seems to confirm this. Stories about vampires abound, with werewolves and witches coming in close behind. Angels and demons have been popular subjects ever since The Divine Comedy.

Don't even get me started on faeries.

The thing is, no subject is ever really "done to death". And one day whilst I was minding my own business (probably eating a sandwich or something), an idea planted itself in my head. It festered there for a while, as ideas do when you're trying to ignore them, until I finally came to an inescapable conclusion.

I was going to write a fantasy series.

Like I said, I love fantasy. Monsters and magic and witchcraft fascinate me (sorry, Mom). At the same time, I wanted to put a different spin on things. Magic wardrobes and brave new worlds are fun, but I wanted something set in our world, someplace people would recognize. I'm also a massive nerd. So I started researching.

It's always intrigued me the number of people who claim to have had paranormal experiences. Sure, not all these stories are true. Sure, some of these people might be certifiable. That said, I have a hard time believing all of them are crazy, which raises some interesting questions. One in particular sticks out:

What if?
What if ghosts exist?
What if the monsters in your closet are real?
What if that movement you caught out of the corner of your eye wasn't just a trick of the light?

These are not new questions. People have been grappling with forces beyond their comprehension since time immemorial, and telling stories about them for at least that long. Vampire lore existed long before Dracula and Vlad the Impaler.

So who are the monsters? Where are they hiding?

It's the job of every author to find their own answers. Many of us draw inspiration from the same places, and come to similar conclusions. I don't think this is a bad thing. Monsters have always been a reflection of our collective fears. In my world—our world—they hide where monsters often do: right in front of you.

How do you come up with anything new? It's a question I've been asking myself from the get-go. And for me, the answer has been simple.

About the author:
L.J.K Oliva is the devil-may-care alter-ego of noir romance novelist Laura Oliva. She likes her whiskey strong, her chocolate dark, and her steak bloody. L.J.K. likes monsters... and knows the darkest ones don't live in closets.
Website ** WriteBitches ** Goodreads
Facebook ** Twitter ** Pinterest ** NewsLetter

Hey guys! Thanks so much for having me over today. Have a great week!

I think that imagination does not have limits so even if the "main ingredients" are the same, they could be mixed in the most original and "tasty" ways.