She did not agree to lose her heart. - Revolutionary Hearts by Pema Donyo

Parineeta Singh has always known her purpose in life: to help exact revenge on the invading British and free India. She becomes a maid for General Carton in order to supply information to her brother’s Indian revolutionary group. But when her employer is exposed as an American spy, she agrees to help him escape the British Raj. 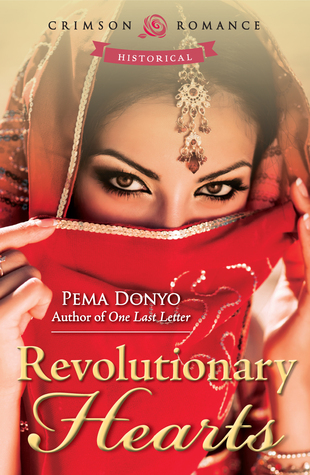 Parineeta Singh has always known her purpose in life: to help exact revenge on the invading British and free India. She becomes a maid for General Carton in order to supply information to her brother’s Indian revolutionary group. But when her employer is exposed as an American spy, she agrees to help him escape the British Raj.

She did not agree to lose her heart.

To complete his mission, Carton – aka undercover operative Warren Khan – must hide both his true objective and his part-Indian heritage. But once he meets the captivating Parineeta, who holds the key to both his freedom and capturing her brother, a suspected anarchist, he finds the subterfuge more difficult than anticipated.

Navigating between the lavish social circles of the British elite and the dense jungles of 1920s India on the brink of the country’s revolution, the two must find a way to protect both their lives and their love.

“How do you know so much about the jungle, anyway?” He leaned against one side of the cave, and she watched his face slip into the shadows. “I thought your entire family worked for the previous general who lived in that house before me. Surely he didn’t send you out for tasks in the trees.”

The unbidden memories sent a fresh wave of pain straight to her heart. “When I was younger, I worked as a maid in the house. But the previous general was… He would instruct me to scrub the floors from dawn until sundown, when I would finally receive a break to eat a meal. All his servants were treated in such a manner.”

“I do not believe he saw us as people. We could be worked like dogs. I would often escape into the jungle, and eventually I no longer worked in the house at all.”

“I see.” Warren reached out to envelope both of her hands into his smooth ones. She flinched. Yet as her skin grew accustomed to the touch, she relaxed her hands in his. It alarmed her how much more at ease she was becoming around him. It was almost as if he provided a source of comfort, something she couldn’t quite name and didn’t care to. “I do not understand why anyone would be cruel to you, though.”

He rubbed his thumb in a circular motion over her hand. Shockwaves from his touch jolted up her arm.

Danger. She wrenched one of her hands from his hold and pivoted on her heel. But his right hand still gripped hers with firm pressure. Her torso twisted as she kept her face turned from his. “Then you do not know enough of the world.”

“I think I do.” His voice was low and husky. A chill ran up Parineeta’s spine and unfamiliar heat pooled in the pit of her stomach. “I’ve seen and known many women during my life. No agent’s or colonel’s daughter has ever been more courageous or intelligent than you.”

Parineeta spun her head around. She wanted—no, she needed—to believe this man. No one had ever said the honeyed words that left his mouth to her before. They were so sweet that she could almost taste her grandmother’s syrup. He squeezed her hand and brought her body ever so closer to his. His musky scent lingered in the air, and she would have sworn he could hear her heartbeat.

“You called me intelligent in the past. Am I?” She lifted her chin, reclaiming her pride and throwing off whatever feeling this man gave her. She would not buckle to her knees before him. “I am here to learn information from you and nothing more, yet you seem to draw me into dangerous situations.”

Warren lifted his thumb to graze the top of her cheekbone. She struggled to keep her breathing under control as she met his gaze. The brown hair she had grown accustomed to seeing so coiffed and slicked back had fallen from its former grace and hung loose over his forehead, the ends brushing the top of his eyes.

When he spoke, he sounded distant, as if in a trance. His eyes remained fixed on hers. “I wish every woman was like you.”

She felt her cheeks flush. No man had ever spoken to her with such boldness before. A heady rush swept through her body as he inched closer to her, removing the gap between them as he inclined his body toward hers. His stubble scratched the side of her cheek, and his scent bombarded her senses, removing all rational thought. It was only her and him, in this moment, free and alive and closer and closer….

His lips brushed against hers, softly at first, then more insistent. She clutched the collar of his kameez. Could he hear her heart pounding? His right hand threaded through her hair, combing through her waves and falling along the sides of her sari. His other hand pressed into the small of her back, molding her body against his.

Her body naturally reacted in the same way—hungry and yearning against his lips. She put everything she had into the kiss, all her years of rejection and feeling unwanted and being unable to marry due to her skin. Too dark for the British to view her as an equal, too light for the men in her village to forget who her father was. She’d never kissed a man before. And this one made her feel like a flame burning up from the tips of her toes to the top of her head.

Goodreads ** Amazon ** Barnes&Noble
About the author:
Pema Donyo is the author of historical romance and young adult fiction. She is also a coffee-fueled college student by day and a creative writer by night. She currently lives in sunny Southern California, where any temperature less than 70 degrees is freezing and flip-flops never go out of season. As a sophomore at Claremont McKenna, she’s still working on mastering that delicate balance between finishing homework, meeting publisher deadlines, and… college. Learn more about Pema: