Super Bowl MVP Cam Simmons is only back in town to convince his mom to move out of her failing neighborhood and live in luxury with him in Boston. But running into Tanya stirs up plenty of old feelings he never resolved. He was happy to leave his old life behind him when he hit the NFL, but walking away from their friendship was a mistake he wants to rectify 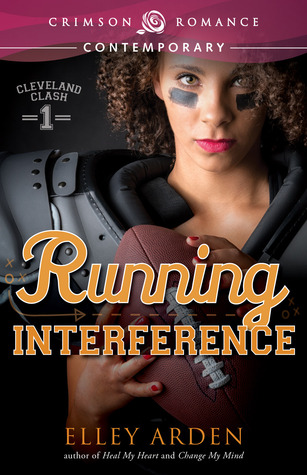 As an offensive linewoman for the Cleveland Clash, Tanya Martin is tough inside and out. The 5'9" beauty can take a hit and keep on going. But when the man she was best friends with - and secretly in love with - in high school comes home the same day she learns her father's gym is in financial trouble, she's unexpectedly blindsided.

Super Bowl MVP Cam Simmons is only back in town to convince his mom to move out of her failing neighborhood and live in luxury with him in Boston. But running into Tanya stirs up plenty of old feelings he never resolved. He was happy to leave his old life behind him when he hit the NFL, but walking away from their friendship was a mistake he wants to rectify.

As they work together to help save her dad's gym, Cam and Tanya's easy camaraderie and undeniable chemistry resurface. But can she open up enough to trust him with her heart a second time around?

“I was thinking, what about a celebrity boxing match?” Tanya asked.

“Back her into the corner!” some guy yelled.

What? Cam took his eyes off her for only a split second.

She popped him again and smiled. “Yeah, that’s probably a terrible idea. I mean who wants to pay to see you get your ass kicked?”

She danced around him, eyes blazing. Focus, man.

He managed a jab to her gut before she moved away.

She approached again. Cam swung. At the last minute, she spun, and his fist hung in midair. More dancing. Little hops. And a rush of laughter. He loved when she had fun. There was nothing more beautiful in the whole world.

She popped him again. Right in the flank.

The guy booed. Cam may have, too, because this didn’t seem fair.

“You know, it’s okay to hit a girl in here,” she said. “I don’t want you getting hung up on political correctness and looking like a fool in front of your … ” she glanced at the guy who was watching them, “fan. Singular.”

Smart ass. He lunged, and she dodged.

She bounced to the left and clobbered him. His brain rattled.

The guy gave a disgusted sound, and then walked away.

His one fan had bailed.

Time to stop the insanity. “Okay!” His louder than normal voice halted Tanya in her tracks, but a second later, she was bouncing again.

“What was that?” she asked.

“Just me announcing that the match can finally begin. I think you’re good and warmed up.” He grinned. “In fact,” he bobbed his brows, “you’re looking super-hot to me.”

Her feet slowed, and her eyes narrowed. “How ‘bout from now on you keep your thoughts to yourself? This is a boxing ring, not group therapy.”

Yep, he’d unnerved her, and he was just getting started.

“I’m being courteous,” he said, shuffling closer and lowering his voice. “I like to let my opponents get a feel for my size before we really get down and dirty.” He bit into his cheek to keep from laughing.

“You wish,” she said, but she was smiling too.

He advanced. She backpedaled, and then she hit the rope.


Elley Arden is a born and bred Pennsylvanian who has lived as far west as Utah and as far north as Wisconsin. She drinks wine like it’s water (a slight exaggeration), prefers a night at the ballpark to a night on the town, and believes almond English toffee is the key to happiness.

The relationship intrigues me!

This sounds like a book where the woman doesn't take any garbage from the man. I think the friendship they have will lead to more and that's the best way to start a relationship, to be friends first :) I'd like to read this and find out what happens to them :)

I think the thing that intrigues me is she is so tough.
Thanks for the giveaway! =)

This Contemporary Romance that features a tough girl offensive linewoman intrigues me.

that the girl looks tough and intimidating

I've never heard of female football teams. We had a girl in high school on the football team, and so I'm curious about this book because I'd like to know if others get all snarky with them or make jokes about masculinity or something. Interesting that her friend made it to a Super Bowl winning team, too. Should be fun!

I have to say that the relationship intrigues me.

The word choice really intrigues me, it really draws me into reading more. :D

Sounds interesting - I like the girls who can kick butt!

What intrigues me is that she's a linewoman.

A female football player! Thanks for the giveaway!

I like that the main character is tough and has a strong personality. I also find it intriguing that she's a football player.