The wind burned against her flesh, tearing at her skin worse than the most painful sunburn she’d ever experienced. The forest shifted in waves around them. She opened her mouth to speak, to ask what was going on, but the words didn't come. The forest grew darker the faster they drove. The trees billowed overhead and though it was spring and there had been leaves on them, the dark forest looked dead. Lil glanced back behind them, seeing a shift and a ripple, the same odd glimmer she'd seen when Rawlie first appeared outside the school. 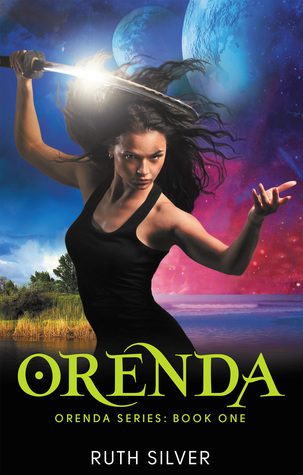 
Join forces with a parallel universe.

Dark forces, magical creatures, and the world Lil thought she knew collide when a dream transports her to the strange world of Orenda. Stunned and terrified, Lil comes face to face with her doppelganger, Willow, who possesses the ability to travel between the two worlds. Everything Lil knows logically says that Orenda can’t exist, but a small clue may be proof that it was more than an ordinary dream. With the threat of her sister in danger, Lil crosses dimensions but it may cost her even more than she bargained for.

A sword wielding girl, the eternal suit, and a parallel universe come together in this action-packed Young Adult fantasy adventure that will keep readers of all ages turning the pages.

Teens swear. I think it’s naive to write a YA novel and use “dang”, “heck”, “shut the front door”, unless you are catering to an audience that’s twelve and you’re looking to capture that tween market.

I don’t believe every words needs to be a swear word but I do feel like if it’s natural for the character to say, they shouldn’t avoid it either.

Reading the Shadow Falls series, I was constantly annoyed by constant use of polite words for swearing (heck or dang). There were so many I felt pulled out of the story like I could be sitting there counting them. That series happens to be one of my favorites but I felt like the amount of “polite swear words” made the book geared towards twelve and up, instead of fourteen or fifteen and up. Overall, I felt like using “polite swear words” were probably overused and instead using the actual word once or twice would have been better and made the same impact.

I also feel it depends on the novel, the characters, and the situation. Are they just cursing because they’re a teenager not getting their way or are they in the middle of a post-apocalyptic war and about to die? To me the scene is important and what feels right should be expressed, to a certain degree. I don’t believe you should be needing to drop any F-bombs in YA fiction but there are other times that “dang” just doesn’t feel appropriate either.

His dark locks fell into his eyes, and he pushed them aside. “We don't have much time. I need your help, Willow.”

Lil's eyes narrowed. “It's Lil,” she said, correcting him. “Why should I help you? Why should I even go with you?” She stood beside his car, her heart thumping in her chest as she crossed her arms.

“How do you know my sister?” Lil’s eyes narrowed.

Lil was torn in two. She shouldn't go with Rawlie, but the thought of something happening to her sister was even more terrifying than any gruesome scene she could imagine landing in herself. “What happened?” She looked back as the main door to the school opened and the principal came outside to the lot. It was now or never. If they waited any longer, he'd be wondering why she wasn't in class.

“If we're leaving, now would be a good time.” Rawlie jumped into the car, not bothering to open the door. He unlocked the passenger side and Lil pulled the door open, glancing back at the principal before getting into the car. A moment later, Rawlie sped off and away from Twain High.

The drive was like nothing Lil had ever experienced. She secured her seatbelt, tightening it as much as possible. The wind burned against her flesh, tearing at her skin worse than the most painful sunburn she’d ever experienced. The forest shifted in waves around them. She opened her mouth to speak, to ask what was going on, but the words didn't come. The forest grew darker the faster they drove. The trees billowed overhead and though it was spring and there had been leaves on them, the dark forest looked dead. Lil glanced back behind them, seeing a shift and a ripple, the same odd glimmer she'd seen when Rawlie first appeared outside the school.

“Where are we going?” Lil choked out, gasping for air. A bird swooped down just above her head and she flinched, swatting it away. She’d never liked birds, and she definitely wasn’t a fan of ones with large, sharp talons coming at her face.

“Yeah, I don't like birds either. Getting to Orenda through the forest isn’t an easy drive. It’ll be okay.” Rawlie moved an arm to cover and protect Lil while he drove with the other.

“How is any of this okay?” Lil’s eyes widened with alarm as the dead trees closed in on them. The roar was as deafening as a lion's, causing the windshield to shudder and her heart rate to quicken. From a distance, she could make out the faintest hint of pink light streaming in from the edge of the forest. She doubted they'd make it in time. The forest was swallowing them whole. “I want out!” she screamed, fear overtaking her.

“If we stop, we're both dead.” Rawlie didn't let up on the gas. He pushed the pedal harder to the floor, his arm protecting Lil from anything that might attack as they narrowly escaped the forest. He should have put the top up on the convertible before they left, Lil found herself thinking. A moment later, they reached the clearing and Rawlie put both hands back on the steering wheel as they came to an abrupt halt.

Ruth Silver first began writing poetry as a teenager and reading heaps of fan fiction in her free time. She has written under three unique pseudo names and penned well over a hundred stories.

She attended Northern Illinois University in 2001 and graduated with a Bachelor's in Communication. While in college she spent much of her free time writing with friends she met online and penning her first novel, "Deuces are Wild", which she self-published in 2004. Her favorite class was Creative Writing senior year where she often handed in assignments longer than the professor required because she loved to write and always wanted to finish her stories.

Her love of writing, led her on an adventure in 2007 to Melbourne, Australia. Silver enjoys reading YA novels and sharing her favorite books with other readers. She runs her own book blog and also enjoys photography and traveling.

Sometimes I hate reading good excerpts without having the book to finish reading!! I'm hooked, I want to read the rest of this book!! :)

Nice cover and I liked the guest post about swearing in YA Fiction. When I was a teen there was definite swearing going on so I think it's more natural to have some in the book if the situation or character calls for it.

I enjoyed reading the excerpt. I would love to read the whole novel. Thank you for sharing this.