I’m trying to put the pieces back together - Unlike Any Other (Unexpected, #1) by Claudia Y. Burgoa

The name AJ Colthurst may not have any meaning to the public eye, but it should, as I’m the daughter of two famous celebrities. Like any superstar, they crave privacy; so much of it, they built a house in the middle of nowhere for us children. As we grew older, we discovered the lies they built as a fort to protect us from the media, ended up causing emotional damage along the way. 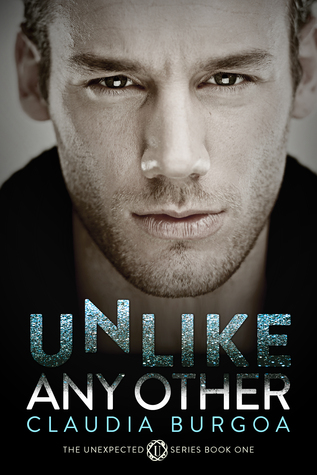 AJ
The name AJ Colthurst may not have any meaning to the public eye, but it should, as I’m the daughter of two famous celebrities. Like any superstar, they crave privacy; so much of it, they built a house in the middle of nowhere for us children. As we grew older, we discovered the lies they built as a fort to protect us from the media, ended up causing emotional damage along the way.

I carry a portion of the guilt on my shoulders; the other part I discovered is the separation of my parents. Their unorthodox ways may have driven me bonkers, but knowing they are no longer together is unacceptable.

That’s why I decided to rattle their cage by reminding at least one of my parents of the past and the reason they belong together. They need to remember why their love is so perfect and why they have to fight to keep it alive. Even if it means I have to dredge up some of my own painful memories along the way.

Gabe
Back in the early eighties, I set myself to succeed in the financial world. The first step had been moving to New York City to become a stockbroker, but things didn’t work out the way I had hoped. Instead, I ended up making movies and by the end of the decade, Gabe Colt had become a famous name. The downside to my career of choice: the paparazzi. In order to protect my family and our privacy, I maintained my family away from the circus. It had been for their own good; a decision we had made before we started our family.

However, those past decisions ended up chasing my entire family away and now I’m trying to put the pieces back together along with my little girl.

“You don’t seem surprised to see me.”

“The bank called earlier to inform me that Miss Colthurst spent twenty-five thousand dollars in one swipe and to confirm that I authorized the transaction. You haven’t used your card in a long time and suddenly you spend thousands of dollars in just minutes.” We enter a large room with wall to wall bookcases that span from the floor up to the ceiling. Behind a mahogany desk, there is a majestic panoramic window that faces the ocean. A familiar setting, but I’m positive that I’ve never been here before. Gabriel closes the door behind us and resumes the conversation. “Logically, I had to find out what you were up to. I feared you’d been in the hospital and with that pride you carry… you wouldn’t call. That’s why I sent Mason to pick you up, I wanted him to make sure you're alright. He was in the neighborhood.”

Well, he’s here, I’m here, might as well get the party started.

“I wanted you to tell me that what the magazine published is a lie.” I fight with the fist-sized knot in my throat. “But I witnessed that it’s real: a wife, a kid… your first kid, the magazine highlighted that part. Congratulations, I guess.”

I clean the dripping sarcasm from my mouth with the back of my hand.

Those wrinkles around his blue eyes shrink even more. He doesn’t look as young as he does on the cover of magazines. Late fifties look different in front of the cameras, in the media, and, in general. With all the makeup and Photoshop they apply, not many get to see the real face of Gabriel Colt; only a few of us are lucky.

“Ah, that made you crawl outside your little hideout, I see.” He closes his eyes and takes several breaths before opening them again. “Life changed while you were gone, AJ. I don’t think you have the right to burst into my house and make a scene.”

“Your house?” I try to grab the edge of the desk to keep myself from getting caught in the rapids I’m swimming against at the moment. What happened to: “What’s yours is ours?”

“So, I take it you’re not here to apologize?” he dodges my question.

“This house looks a lot like the house in Baja—also looks like home,” I take a few steps and scan the room—avoiding his question.

Two can play the same game. I learned from the best—him.

The answer is simple. Hell, no, I’m not asking him to forgive me. Not when he’s proving that I was right. He lied for a long time. Or, that he only cares about his image and what the rest of the world thinks of him.

“Eight rooms upstairs, I bet. The biggest facing the ocean and it’s right above this library, isn’t it? You never brought us here.” Babbling, faking anger that’s keeping me standing in one piece without shedding a tear. “Can I ask you a question? Actually, just a few things and after that, I swear I’ll disappear forever since that is what you want.”

I cough a couple of times masking the shakiness of my voice. Gabriel sets his hands on his hips and stares at me before he lets a breath out. I take that as a ‘yes’ or a ‘go ahead you poor kid, let’s give this one last time before I start my new family’.
****
That was one of the pivotal moments of my career and my personal life. I met my best friend, the love of my life, and learned to love acting.

“I can’t be sharing rooms with her,” a soft female voice spoke after Tara handed out the room keys.

Instead of checking who I’d be rooming with, I leaned forward and spotted a petite blonde pointing toward a tall brunette whose hair was bigger than the flower pot behind her.

“Abigail,” Tara addressed her. “We have a contract. You and Lara will share, and if you break the contract, you’ll have to pay for any production delays.”

Abigail Ritz and Lara Stevens had worked together in several teenage movies. Everyone who followed the basic news channels were aware of their feud. They fought for the same guy years ago, Lara’s fiancé at that moment. He had been Abigail’s boyfriend first. Some entrepreneur who liked to have beautiful celebrities on his arm.

Abigail Ritz was more famous in the early eighties, but just as the women fought for the same guy, they also fought for roles. If they worked in the same movie, the fights became public domain. Lara was tall with dark, long hair and deep, blue eyes while Abigail was petite and curvy with green eyes and blonde hair.

After Tara had wrapped up the meeting, I went to speak with Abigail. “Everything okay?” I extended my hand. “Gabe Colt.”

“Yes, of course.” She smoothed her hair before extending her hand. “Nice to meet you, Gabe.”

For artistic purposes, I had shortened my name from Gabriel James Colthurst to just Gabe Colt. A name I wanted to change legally but haven’t had the time.

From the corner of my eye I spotted someone approaching us, then I heard his voice.

“Colt,” he called out. I turned around and found a man about an inch shorter than me, long, brown hair that matched Lara’s length and volume, and a bandana tied around his forehead. He wore leather pants, leather jacket, and a pair of industrial boots with chains around them—weird. “Christian Ainsley Decker, your new roommate.”

Tara had to be kidding me, the Rock God was Christian Decker and I was rooming with him. The idea of suggesting to switch became appealing. I could get to know little Abby while he could exchange hair product secrets with Lara.

“It’s my lucky day,” Decker muttered. “I’m rooming with Mr. Hot Shot, would you mind switching rooms, darling?” He wiggled his eyebrows at Abby. “You and I can get to know one another as I make you reach places no other man has taken you before.”

Abby giggled and tried to compose her posture.

“I’ll see the two of you around.” Abigail scurried away.

In the end, it didn’t matter who I roomed with; I had a schedule to meet and my daily routine to follow. The most damage he could do was play his music too loud. My college roommate had cranked his heavy metal all the way up when he wanted to study. The only difference between back then and now would be that I could complain to the creator instead of the fan.

Decker’s band, Dreadful Souls, emulated the genre of heavy metal of which I wasn’t a fan. His band played that shit as he screamed nonsense lyrics. Or they played cheesy ballads that had women dropping their panties and throwing them at him during their concerts. My roommate made me go with him to one of their concerts since I owed him one.

We headed to the elevator rolling our luggage behind us when he spoke.

His intent to answer something I hadn’t asked didn’t make sense and I chose to ignore him because the less we talked, the less I had to deal with his personality. Not that I knew anything about this long haired freak.

Born on the mystical day of October 30th in the not so mystical lands of Mexico City, Claudia grew up with a childhood that resembled a caffeine-injected soap opera. Seventeen years ago she ventured to the lands of her techie husband—a.k.a. the U.S.—with their offspring to start a new adventure.

She now lives in Colorado working as a CFO for a small IT company, managing her household filled with three confused dogs, said nerd husband, two daughters wrought with fandoms and a son who thinks he’s the boss of the house. To survive she works continually to find purpose for the voices flitting through her head, plus she consumes high quantities of chocolate to keep the last threads of sanity intact.

Author's Giveaway
a Rafflecopter giveaway
Posted by CCAM at 4:30 PM