If Romeo had wings and Juliet a barbed tail... As Above, So Below Box Set by Loren Rhoads

"The Good Guys are bad. The Bad Guys are good. Characters with complex morality make this book a rich and randy read. Angels and demons--sexy and dangerous--keep the pages turning." Angel McCoy, Goodreads 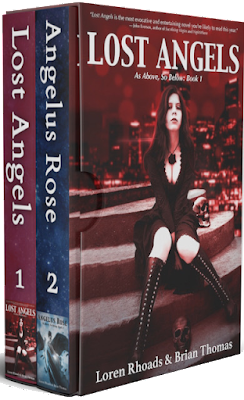 How to Blend Teas for the Holidays

I drink a lot of tea. I learned the habit from my mom. Recently, one of the things I discovered that I love to do is to blend teas to represent the characters in my books and stories. I've given those tea blends away as holiday presents, so I'll walk you through the process so you can create your own gift teas.
The main character in my As Above, So Below books is Lorelei. She’s a young succubus, who is only several hundred years old when she falls in love with the angel Azaziel. In order to make a tea to represent her, I thought about what teas I like that I could adapt. You could start with the person for whom you're making a present: think about their personality in flavors.
If Lorelei drank tea, it would bea spicy chai. I started my blend with a hearty Masala Chai as a base. In my novels, Lorelei’s signature cocktail is vodka and cranberry juice, so I added dried cranberries to the tea, along with dried apple pieces to symbolize temptation. Then I boosted the ginger in the chai to make it hotter on the tongue. Lorelei’s tea has a wonderful spicy aroma, full of cinnamon and clove. It tastes slightly fruity, with a buzz of ginger at the finish.
Adagio Teas (adagio.com) makes it really easy to blend your own teas. First off, you'll need to make an account, which is free.
Once that's done, click on Blends in the menu bar. One of your options is Create a Blend.
Click on that and it opens a page headed Create Your Own Blend. This allows you to name the tea, then pick up to three of Adagio's flavored teas from drop-down menus. You can adjust how much or how little of each flavor you'd like to include using the slider bar. Adagio has a lot of teas to mix and match.
You're also allowed to choose up to three "Accents." These range from dried fruit to flower petals to sprinkles or candy pieces. Just remember that the more Accents you mix in, the less tea you'll get in each cup.
I use the website Canva.com to create labels for each of my blends. Adagio requests that the label images be 700 x 437-pixel jpegs. They want you to own the copyright for the images you upload, but Canva has a lot of copyright-free templates that you can choose from. I find Canva easier (and cheaper!) to use than Photoshop.
Once you've uploaded your label artwork,you are allowed to make your teas private or available for sale. If you sell them, Adagio gives you points that you can spend on tea samples or free shipping or small gifts in a future order.
You can make a whole series of related blends, say, one for every member of your family? If you put two blends into a "ship," then anyone who orders both teas will get a discount.
I put Lorelei's tea into a 'ship with Azaziel's tea, which is flecked with petals of pink peony, blue lavender, yellow marigold, and red rose, to symbolize the Fields of Heaven. All those flower petals make a really pretty tea. It has a base of Adagio’s Assam Melody tea, to which I added Adagio’s vanilla-flavored Cream Tea to indicate Heaven and purity. Azaziel's tea has a wonderful flavor, friendly and welcoming, and makes a nice contrast to Lorelei’s spicy, fruity tea.
Adagio allows you to order a sample tin of each tea or to buy them in 3-ounce pouches or 5-ounce tins. My preference is the handsome reusable 5-ounce tin, the perfect size for holiday presents.
If you're curious to see what I've done with my teas, here are the links:
Lorelei’s chai: HERE
Azaziel’s heavenly tea: HERE

Lorelei licked the last traces of soul from her lips, then smoothed the knee-length hobble dress over her thighs. The black Lycra snuggled around her like a living creature. The barbed tip of her tail twitched as she scanned the dance club, seeking more prey.

Her violet eyes locked on the creature seated at the end of the zinc bar, dressed in a rumpled khaki trench coat. Through the smoke and flashing lights of the dance club, she saw him for what he was: an angel of melancholy. Hers. His wings weren’t manifest, but the unmistakable glow of his halo enforced a margin of emptiness around him. Shoulders hunched over his glass, he was doing his best to ignore what was going on around the club. Clearly not having fun, which was a damned shame, considering that fun was what Lost Angels was all about. Lorelei wondered what it would take to put a smile on his face.

She patted hair over the nubs of her horns and adjusted the dress’s zipper to be demure as could be, only the pale white column of her throat revealed. Once she’d made certain that the seams on her stockings were straight and her mortal glamour was flawless, she stepped out of the shadows. Let’s see if this one could be won without a fight.

The angel ignored her when she leaned across the bar at his elbow, straining the lycra dress just so. Lorelei waved the bartender over. “My usual,” she shouted above the music, “and whatever he’s drinking. On my tab.”

When another Crown Royal appeared in front of him, the angel made no move toward it. Lorelei breathed into his ear, “Say thank you.”

Vaguely in the bartender’s direction, the angel repeated, “Thank you.”

Lorelei touched her glass against the angel’s, then downed a good mouthful of her drink. More Absolut than cranberry, just the way she liked it. However, the angel continued to ignore her, tense and miserable, wanting his whiskey but apparently afraid to touch it.

“Thank you, Lorelei,” she prompted. She leaned against the angel, nestling his shoulder between her breasts. She reached around his waist to hold him close. He could escape her, certainly, if he wanted to cause a scene. She licked her lips, so close to his ear that he quivered at the sound. “What’s your name, Angel?”

He sipped his drink before answering, “Aza.”

There should be an ‘el’ on there somewhere. Amused by the dropped honorific, she echoed, “Just Aza?”

The nickname made him sound accessible. Not fallen yet, but unimaginably lonely. Lorelei asked, “Looking for company, Aza?”

The angel put his glass down very precisely on the bar. She was unprepared when his stormy green eyes turned to her. “Maybe I came looking for you, Lorelei.”

The timbre of his voice shivered through her like lightning.

When she was sure of her composure, she purred, “Here I am, Angel.”
Goodreads ** Amazon

About the author:
Loren Rhoads is the co-author of Lost Angels and Angelus Rose -- the As Above, So Below duology -- with Brian Thomas. Loren's stories about the succubus Lorelei have appeared in the books Sins of the Sirens, Demon Lovers, and Unsafe Words, and most recently online at The Fabulist.
Check out more of her work at:
Website * Blog * Goodreads * Twitter * Instagram * Facebook * Newsletter
Author's Giveaway
a Rafflecopter giveaway
Posted by CCAM at 12:30 PM

Thanks for hosting my guest post! I can't wait to hear about the teas people are inspired to make.

This a fantastic giveaway! Thank you so much for the chance!

the "impossible love" is the best both for authors and readers :))

I love Loren Rhoads. She is so good at writing. I really enjoy her short stories when she contributes to books with other author.

Thanks, everyone, for your kind words! I hope your holidays are lovely.