The Spell of the Rose (Fleex: Adventures Around the Worlds, #1) by Toni Behm

— Magic may take many forms, but love shall rule supreme —
Though wholly shorn of memories like all who dwell in the village of Fogland, Fleex knows this: his heart will always beat for Fin and Fin alone. 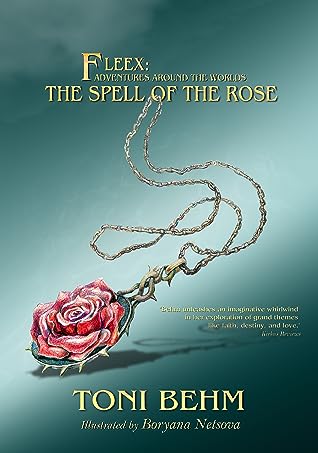 Description:
Published: December 11th, 2021
— Magic may take many forms, but love shall rule supreme —
Though wholly shorn of memories like all who dwell in the village of Fogland, Fleex knows this: his heart will always beat for Fin and Fin alone. However, when his dearest friend is hoodwinked by the Gossiper, he’ll need to venture beyond the safety of “home” to somehow save her.
Armed with but the oddities his guardians had found him with—a cryptic book and broken necklace—Fleex must find his way through countless worlds, collecting scattered clues. Accompanied by Flip and Flop, two Greenies sent by Fog Almighty, Fleex soon finds his quest means rather more than simply saving Fin. In fact, the very universe is hanging in the balance now, for music, knowledge, and all things good are slowly being swallowed by a monster made of light.
Awaiting Fleex are riddles from the Reader in the World of Word, demands from the Collector, and a slew of wicked on the path to where the High Priest lives.
Only time will tell if Fleex can mend the fractures greed has caused, but either way, he’ll reclaim Fin or meet his fate en route.
EXCERPT

They hung in the grey void, water dripping from their clothes and falling into the abyss below them. Fleex remembered. Maybe he had to use the word bridge the Collector had told him about. But were they in Word yet and would that bridge help? One thing was sure, he would never know if he did not try. He strained his memory and began:

‘Lead us to Light of knowledge,

so With letters build step one!’

A step appeared before him. It was made of letters, interwoven so closely that it was impossible to read what was written. The step was hanging in the air, very close to them, emitting a weak light.

To reach the hidden treasure though A second step be done.

Up the ladder I shall climb Until I reach the sun.

To find the wisdom of all time

From which the truth be spun.

The second step consisted of texts in languages unknown to Fleex. The Greenies had explained to him that Herba Linguista helped only with understanding and speaking, but not with reading of foreign texts. That was obviously a not-very-advanced herb. Further up the ladder, there were steps with densely-written formulae and numbers, maps and charts. All was well for the moment, he just needed to climb them. The steps were stable and broad enough for him. Fleex climbed them without stopping to take a breath until he reached the top, where he saw something that seemed to resemble a book. In fact, it was not possible to tell whether it was a book or not. It was enormous in size, its cover was dark and cracked, and its pages, as big as bed sheets, were sticking out untidily. When they went very close to it, they could hear panting and mumbling in a foreign tongue. A dull crackle seemed to come from inside, and small clouds of white dust spread along its edges. Fleex gulped, wondering what to do.

There was a loud ‘BOOM!’ and a scruffy-looking creature with large, lens-like eyes suddenly rolled out from the book. It came to a halt with a loud screech, just before it could bump into Fleex and push him back down the ladder. It peered up through thick lenses and said:

‘Hmmm, a group of foreigners appear?

But I did not invite them here.’

‘We do not wish to take up your valuable time,’ said Flip to the grumpy-looking, little man who was studying them from the ground.

‘The last ones came and said the same, I trusted them for sure.

Then off they went with all my things

So now I trust no more.’

He rose slowly. ‘What do you want?’

About the author:
Born and raised in Stara Zagora, Bulgaria, Toni Behm graduated MA in Bulgarian Language and Literature from the University of Plovdiv and later certified as a TEFL teacher. She worked for a time at a local radio station, newspaper, then she taught English at school and university. In 2008 she moved to the USA and started writing this story. The initial idea was that it would be a short humorous fantasy story, but later it turned into a longer fairy-tale.
Published under the pen name A.V. Osten as an e-book is her dystopian novelette The Head Employee Precedent, part of the Hemisphere series.
Toni lives in Michigan with her husband, daughter, and their two cats.
Website * Goodreads * Facebook * Twitter * Instagram
Author's Giveaway
a Rafflecopter giveaway
Posted by CCAM at 11:30 AM