"I thoroughly enjoyed this and if you enjoy urban fantasy than I wholeheartedly recommend this author and her work. With characters that leap off the page and unique world building her books are exciting, entertaining and just such fun to read." Marta C., Goodreads 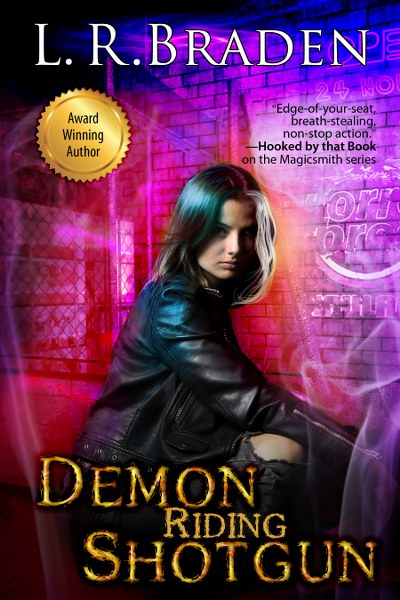 Description:
Possessed by a demon since she was eleven years old, Mira Fuentes maintains a fragile alliance with the snarky soul who shares her body. Together they hunt down unstable Rifters-- demon-controlled humans bent on causing chaos in the mortal realm. But when a routine hunt leads to a powerful Rifter with plans for Baltimore, Mira quickly finds herself in over her head and at the top of the city's Most Wanted.
Recently retired from the PTF after losing his partner, Ty Williams now works for the Baltimore PD and keeps his distance from cases involving magic. But when a person dies of clearly magical causes and the PTF doesn't have any agents to spare, Ty is the closest thing the department has to an expert. Saddled with a new partner he doesn't want and a mountain of self-doubt, it's his job to track down a suspect who looks suspiciously like the one-night-stand he brought home from the bar last night.
Mira will have to set her trust issues aside and enlist the help of a man determined to uncover her secrets if she hopes to learn the identity of the demon's host and prevent the human race from becoming meat puppets for the denizens of the Rift.
EXCERPT
Mira scooped a handful of shockingly cold water into her palms and splashed it on her face. She gasped and shook. Icy drips trickled down her neck, soothing the raw skin where the collar had burned her. The distorted reflection on the tumbling surface of the water threw back swathes of color with little detail, but Mira could still see that half her hair was white and her left eye shone a brilliant gold. She and her demon were matched equally at the moment, or near enough, each with one hand on the steering wheel—which might seem like a balanced partnership but was a sure recipe for a wreck.
Because her demon was naturally so much more powerful than her, their balance needed to be far from even, like a heavy-handled knife balanced on a fingertip. There was a lot more material on one end because the other was so dense. In Mira’s case, the demon could only keep the smallest portion of itself manifested or the body they shared would be torn to pieces by the force of its presence. Even now, after the feedings that had temporarily stabilized her, Mira could feel the strain on her cells. Purplish stains were starting to form around her fingernails and trace up her fingers like ground cracking in advance of an earthquake.
She pressed her palms to the damp earth and took a deep breath of moist air.
<We need to reset the anchors.> The demon’s voice swelled and faded, as though she was rapidly changing positions, flitting about Mira’s mind, unable to hold still—the incorporeal equivalent of pacing.
Nodding, Mira shifted so she was sitting in a more comfortable position. They hadn’t had to reset their anchors in years, and she wasn’t sure how long it would take. She relaxed her neck and shoulders until her chin rested against her chest, closed her eyes, and took another long, steady breath.
She opened herself up to the energy around her—not in unshielded abandon as she had in the police van, but by allowing a thin trickle to funnel through a specific point that she controlled like a sluice gate. She could feel the rift energy, the energy her demon was made from, seeping into her, filling her reservoirs. At the same time she could feel the pull of the demon’s power, tearing away the energy that kept her alive, the physical bonds of her mortal form.
This was the balance they maintained—the cannibalistic partnership—each devouring the essence of the other for the power they needed to perform magic.
Want more magic, mystery, and mayhem?
**A Drop of Magic (Book 1) is On Sale for Only .99 cents!**
***Courting Darkness (Book 2) in On Sale For Only 2.99!!***
CHECK OUT THE AWARD-WINNING MAGICSMITH SERIES

About the author:
L.R. Braden is the bestselling author of the Magicsmith urban fantasy series, the standalone novel Demon Riding Shotgun, and several works of short fiction. Her writing has won the Eric Hoffer Book Award for Sci-fi/Fantasy, the First Horizon Award for debut authors, and the Imadjinn Award for Best Urban Fantasy (twice). She was also honored to be a finalist for the Rocky Mountain Fiction Writers 2021 Writer of the Year award. She and her family live in the foothills of the Colorado Rockies, where she spends her time writing, playing, and weaving metal into intricate chain mail jewelry that she sells in her Etsy shop.
Website * Goodreads * Facebook * Twitter * Instagram * Bookbub * Amazon
Author's Giveaway
a Rafflecopter giveaway
Posted by CCAM at 3:30 PM

I like the cover and synopsis, this sounds like an awesome read. Thank you for posting about this book

I love the title for this! lol.... Thanks for sharing the excerpt with all of us! :)

I could sink my teeth into this one. Gorgeous cover art too.

Fantastic excerpt, L.R. and I can't wait to read Demon Riding Shotgun, it sounds just as good as the first two and I love the cover! Thanks for sharing it and have a wonderful holiday season!