"Overall, this was an amazing book and I'm so happy I got to read it. I read it as a standalone without reading the previous book first and it was perfectly fine like that. There were other characters I got to meet but nothing that made me feel like I was missing part of the story." Sabrina, Goodreads 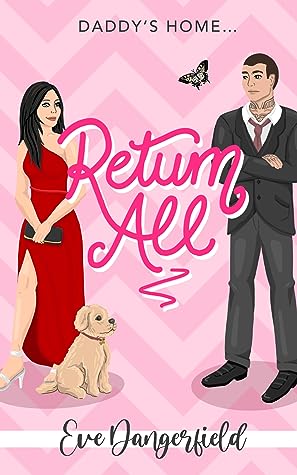 Description:
Published: December 14th, 2021
Hundreds of women have tried to win Derek over, but the only girl he’s loved is nowhere to be found…
Derek Hardiman has been crowned a football prodigy—but success came at the cost of his dorky high school sweetheart, Mara Temple. A decade after she left town, he still can’t imagine marrying someone who isn’t her…
Traveling for most of her twenties, Mara has returned home with a designer wardrobe, a sweet puppy, and a new last name. What better to keep her surly ex-boyfriend from recognizing her?
When Mara and Derek are thrown back into each other’s lives the obsession that began when they were teenagers returns in full force. Derek can hardly believe the goddess his once-awkward lover has become, and he’s determined to win her back. But Mara is determined not to give in to the hype surrounding her bachelor superstar ex. Unfortunately, Derek has always lived up to the hype. After all, a girl only has one daddy…
Should true love get a second chance?
Return All is a standalone second chance romance by critically acclaimed author Eve Dangerfield.
EXCERPT

Buoyed by her secret, Mara padded toward the darkened door. Trance music pounded behind it. A low, almost violent sound that matched her panicked heartbeat. She imagined Derek pacing behind the door like a wolf. She knocked, her skin burning with excitement. She hoped he wasn’t there. And then the door swung open.

Derek wore his dark suit with the inelegance of men who were more comfortable bare-chested, but that only added to his power. He glowered at her like it was her fault he was so gorgeously penned in. His tattoos curled over his collar and cuffs, straining at his civility. His cologne smelled of wood fire and cherries and as he watched her, his gaze locked on her breasts, Mara was sure he was going to snap, tear her coat off and take her.

“Nice jacket.” He leaned against the doorway, looking her up and down. “What’s underneath it?”

Mara’s tongue stuck to the roof of her mouth.

She moved to walk past him, but he pressed a hand to the other side of the door frame. “Where’s my hello?”

“Not that.” He turned his face to the side tapping his cheek. He was throwing down the gauntlet already.

She looked around. No one was in the hall. Why did it matter if she kissed Derek on the cheek? She stood on her toes, pressing her lips to him, and felt the stubble beneath his skin. His cologne mixed with his raw, dizzying animal scent and she exhaled, feeling dizzy. Then she caught a whiff of something she couldn’t place. She inhaled.

“Are you smelling me?”

She grinned. “You still smoke.”

He scowled. “Not all the time.”

“But tonight?” She pointed to the balcony she could see behind him. “Out there maybe?”

“I can’t believe it! You’re an athlete. You’re a role model.”

“That’s enough,” he growled, sliding a hand around her. “Get in here, Little Miss.”

She could feel Derek staring at her ass, albeit through the coat. “It’s nice.”

A small huff. “You think it’s too expensive, don’t you?”

“Glad to hear it.” He strode to a standing ice bucket where a bottle of Dom Perignon waited. “Drink?”

Mara swallowed. She wanted champagne, but not the time spent sitting around drinking it. “Maybe we could just…?”

“Go into the bedroom?”

Derek raised a dark brow. “You can’t even say it, but you want me to drop everything and fuck you like you’re some whore I booked for the night?”

Derek shoved his hands in his suit pockets. “Lemme get this straight. We used to try and grab fifteen minutes together before Maths and now we’ve got all the time in the world and you want to be strangers hammering away at each other again?”

Mara plucked a strawberry from one of the platters. “Pretty much.”

“What about what I want?”

Mara nibbled the strawberry. Tart sweetness spread across her tongue. “What do you want?”

“I want us to spend some time together before I take you into the other room and turn you out.” Derek’s jaw was set, his dark eyes unblinking. He had his game face on, and God only knew what that meant for her body. She needed to shift the vibe of this encounter, fast. She flashed him a smile. “But your card said—”

Mara ignored the surge of heat between her legs. “You sent me lingerie. You said you’d wear a suit. We both know what that means.”

“What does it mean?”

Damn him. He knew she couldn’t say it. She picked up a gingerbread cookie and bit into it, tasting spice and sugar. “Whatever. You lured me here under false pretenses.”

“What did I promise that I didn’t deliver?”

“You sent me an eye mask and ropes.”

“And I’ve yet to see either of them. Or the bodysuit. Where’s the proof you’ve got it on?”

Mara opened the coat, swishing it back and exposing the bodysuit beneath. A muscle leaped in Derek’s jaw. “The ties?”

She held out her Givenchy bag. “In here. Can we go to bed now?”

“Not yet.” He moved toward her, letting his feet hover before each step. He was teasing her, stalking her like a hungry animal. But she wouldn’t let him win. She’d keep snacking until he gave up and took her to bed.

A ghost of a smile passed over his face. “What am I going to do with you, Mara?”

She took another small bite of the cookie. “You make a deal with me?”

“That would set a bad precedent.”

He looked her over, his gaze dragging across her nipples. “Anything I want from you, I’ll take.”

She swallowed, almost choking on her biscuit. “Okay, well, anytime you want to start, I’m here.”

His face softened and that was scarier than his hulking presence in the doorway. “Mara… I know it’s been forever and a day, but come on. It’s me.”

He said it as though she should know which ‘me’ he meant. As though he wasn’t standing in front of her in a ten-thousand-dollar suit with a decade worth of new tattoos and stories she didn’t know. It struck her, how much of a stranger he was. The way he stood without slouching. The way he talked, saying ‘precedent’ and ‘forever and a day.’

So much of what she remembered about Derek had frozen at the age of eighteen. To have him moving and talking in front of her was unnerving. It had been so much easier when he was screwing her brains out at the Sofitel. He’d been like a 3D printout of the man who’d driven her wild as a teenager.

She saw him kneeling on her grandma’s couch, looking at her with the same imploring eyes. ‘You’re the only person who’s ever meant anything to me, baby.’

To her horror, Mara found she was about one second away from crying. She stuffed the rest of the gingerbread cookie in her mouth, casting a quick glance at Derek. His face blurred between the boy she knew and the man everyone knew. She recalled the famous photo of him, walking out of a Vegas Casino with a stunning blonde on his arm. He’d a cigarette hanging out of his mouth and his sunglasses on. She’d only been able to endure that photo because she knew he’d gone beyond her. But now he was here, buying her underwear and strawberries and trying to talk to her. That wasn’t okay. She had nothing to say to this uncanny blend of man and myth. She wanted to exist in her own little world with minimal brush-over from his.

She squared her shoulders. “Derek, I’m wearing a bodysuit and heels. I came to your hotel room at night. I know you have… feelings about us. But I didn’t come here to talk about the past.”

She flinched as he strode toward her, but he merely grabbed the champagne from the ice bucket. “So, you came here to get some dick, did you?”

“So that’s all you want it to be between us? Just fucking?”

She recalled the laughing blonde under his arm in Vegas. “Yes, I do.”

He stood motionless and Mara wondered if he was going to ask her to leave. Then he tore the foil from the neck of the champagne. “Fine. Start acting like this is about fucking.”

About the author:
Eve Dangerfield has loved romance novels ever since she first swiped her grandmother’s paperbacks. Now she writes her own stories about complicated women and gorgeous-but-slightly-tortured men. Her work has been described as 'genre-defying,' 'insanely hot' and ‘the defibrillator contemporary romance needs right now'...and not just by herself or those who might need bone marrow...OTHER PEOPLE! She lives in Melbourne with her boy and a bunch of semi-dead plants. She can generally be found making a mess.
Website * Goodreads * Facebook * Twitter * Instagram
Author's Giveaway:
a Rafflecopter giveaway
Posted by CCAM at 9:41 PM

Students in Qatar can easily avail the services of Assignment Help Qatar to make their assignment impressive. The impressive quality of the assignment helps students to achieve good academic grades and impress their college professors.

Incredible blog you posted and gives significant information to us. Like you I likewise need to share data about Assignment Help Online (what is it and why understudies choose online assignments). So visit our website and give us your important remarks.

This is a good idea for people who actually have some questions or inquiries about this topic. I am so excited to see the discussions that will be made on this thread regarding taxes. I have to say that this kind of topic should really be discussed thoroughly to people who finds it helpful so that i need an assignment there won't be no confusions anymore.

It is good to hear that your store is now expanding to new locations. I have been a patron of Fantastic Eyes because of all the wonderful work that you guys do. I hope expert assignment writer that this expansion move of yours will turn out to be successful. I will definitely go and see this new store of yours