in the hands of a hard working, loyal and at times mischievous teenager... Guardians of the Mask by Haley Kate

"Fantastic fantasy book great for the whole family!
If you like fantasy, magic, battles, love stories and kings evil princes and heroes and heroines you will love this book! " Kevin, Amazon 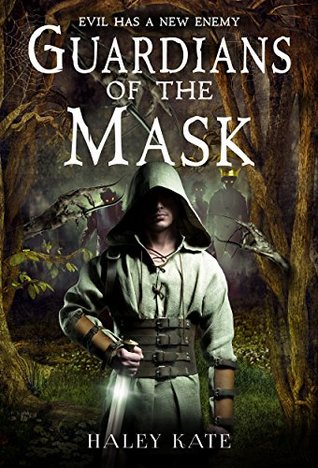 Description:
Published: June 2017
An extraordinary golden mask is in the hands of an ordinary boy…
It’s a mask entrusted to great warriors and heroes, thought to be lost in the sands of time. It can summon immortal armies, grant unimaginable strength and heal mortal wounds.
The golden mask has reappeared. And now it’s in the hands of Rafe, a hard working, loyal and at times mischievous teenager who thinks he is of little importance.
But he is wrong. Rafe is chosen by the mask and destined to become as the warriors of legend.
With the powers of the golden mask, he is the only one who can keep the kingdom safe when it comes under threat.
But not everybody thinks the mask should be in the hands of a common boy. When an eccentric Prince finds out the mask is in the hands of a common boy, he decides to interfere with destiny.
Armed with his own dark forces, he threatens to bring the kingdom to its knees.
EXCERPT

The sun did not stay for long.  A full moon greeted the village early and the gloom of the day sent most people to their beds without supper.  Sam had been one of them.   Rafe chose to linger for a while, walking on the rooftop of the church.  It was a pleasant view from the top, where he could see the gargoyle they had toppled still implanted in the bed of grass beneath.  He towered over the treetops and the hills that surrounded the village.  Beyond the woodland ranged the fallow deer that grazed the palace fields.  The palace never looked more beautiful than it did in the dark.  The lights never went out and the spectacular array of gold and white from the turrets sparkled like the stars in the sky.  It made the sudden interrupting sound of the horn all the more haunting.  Eerie and unexpected, it sent a chill through the spines of all those that heard it, its low groan a warning that danger was coming.  The call of it jumpstarted a fear that was resting inside of Rafe. A call he had been expecting and dreading. Lingering in his heart, the sound of it sent his emotions into overdrive.  Climbing down from the church rooftop, he tore through the forest as fast as his legs would carry him.

Rafe spun around to see Miller, Edward and Theo running from the direction of the mansion.  Miller had replaced his top hat with an uncommonly large helmet.  Rafe caught up to them, desperate for an explanation.  Somehow he doubted whether the Brutes had returned.

“They be comin’ boy! Get ya sword and ya mask.  The village be gatherin’ their best to meet ye!” Miller spat. “Meet me?  For what?  Who’s coming?” Rafe demanded, knowing full well who it was without needing to ask.  “Who d’ya think?  I’d say ye have ‘bout ten minutes b’fore the Prince be findin’ ya.  He wants revenge fer wha’ ye did, though this time he be nay dumb enough to fight on his own!  I says there be two dozen knights marchin’ ‘ere. Even if they do b’lieve in the legends o’ Cherubim’s Mask, they be sworn to obey th’ Prince. Th’ villagers b’lieve in ye, Rafe. Some of em are willin’ t’ fight fer ye.” Rafe looked towards the forest, trying to imagine them.  “The Prince,” Rafe whispered as the truth of it sank in.  “Get the mask, lad!” Miller yelled.

About the author:
Haley Kate writes medieval fairytales and magical mysteries for tweens (and their parents). She also writes workbooks for schools to help reluctant readers engage with fiction.
Goodreads ** Facebook ** Amazon
Author's Giveaway:
a Rafflecopter giveaway
Posted by CCAM at 10:37 AM