18+"This story was also perfect for the holidays with a hilariously adorable Christmas theme as a background story but that also highlighted a lot of the hidden aspects of El Diablo's personality." Jessica, Goodreads 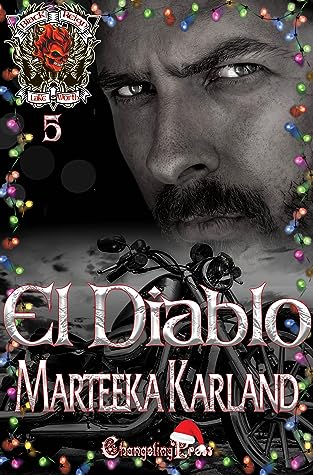 Description:
Release Date: December 3rd 2021
I wasn’t expecting a man like El Diablo. Good thing I’m able to shake his legendary control.
Jezebel – Life in a gilded cage isn't all it's cracked up to be – especially if the whole purpose of the cage is to keep me a virgin till I'm ready to be sacrificed to the man of my father's choosing. I want out, and don’t think I haven’t tried. It's not that easy with daddy's Brotherhood guards all over the place. But that doesn’t mean I want to trade one cage for another. And, let's face it, I have no idea how to live on my own. I've never had the chance. Now I'm not sure I want to learn, because my new jailer – err, rescuer -- is the sexiest man I’ve ever known. El Diablo's not the monster everyone’s made him out to be. But can I tame the beast of a man without losing my heart? All I want for Christmas is a chance to find out…
El Diablo -- I went hunting for a victim. Instead, I found a Christmas Angel. She's the daughter of my enemy, used as a pawn in a deadly game of chess. All I really wanted was the Brotherhood out of Palm Beach. Instead I found an innocent who brings out a side of me I'd thought long buried and gone. But Jezebel's younger than my own daughter, and just as much trouble. And I’m El Diablo -- a title I earned heart and soul. I'm so not what she needs. And now she’s under my protection in the Black Reign compound. She should be completely off limits. I won't let the Brotherhood take her back and force her to give up her dreams. But who's going to protect her from me?
EXCERPT

“Get up, come on, get down with the sickness!” I screamed out the song from Disturbed as the video played on the huge TV covering one wall. I had ground beef browning with onion and had just put in peppers, garlic, mushrooms, and tomatoes. It wouldn’t be long before it was time for the cheese and noodles. I rubbed my hands together. This was gonna be so good!

I stirred the egg noodles, testing their tenderness. Yeah. It was close. I cut up the Velveeta cheese into small blocks, then poured in the tomatoes. After mixing it, I dropped in the cheese a few blocks at a time and stirred until melted, all the while belting out song after song. Disturbed. Five Finger Death Punch. Alice Cooper. AC/DC. Rammstein. Yeah, I liked it hard and loud.

I’d just stirred in the noodles when a movement near the door caught my eye. A man. Correction, a huge man was shutting the door behind him, his eyes on me, but wincing as if the sound was a bit too much for him. Which, likely, it was. I hadn’t met this guy before, but I was used to Malcolm sending in men to intimidate or scare me. Sometimes he sent them to get to know me, to try to cajole me into toeing the line. Especially when I was being particularly difficult. I hadn’t been, though. Not for a couple of months. I’d had my fill of the outside the last time I’d snuck out. I suspect Malcolm knew I was capable of bypassing his security and sneaking out and had simply set up a bad situation for me to fall into.

Instead of muting the TV, I smirked at the big bastard and turned it up even louder. He merely shook his head, then motioned at the remote. Obviously either wanting it or wanting me to mute it. Instead of complying, I shoved it down the garbage disposal and flipped a switch on the wall, turning it on.

The big guy ground his teeth, pulled a gun from his back, and shot the TV.

“Well,” he said, shaking his head slightly as if to clear it. “I guess I won that round.” He gave me a shark-like smile. “My name’s El Diablo. I’d say I was a friend of your father’s but that would be… oversimplifying things, shall we say.”

About the author:
Romance author by night, emergency room tech/clerk by day, Marteeka Karland works really hard to drive everyone in her life completely and totally nuts. She has been creating stories from her warped imagination since she was in the third grade. Her love of writing blossomed throughout her teenage years until it developed into the totally unorthodox and irreverent style her English teachers tried so hard to rid her of. Now, she breathes life into faeries, space hunters, werewolves, vampires, shapeshifters, and a few just plane ole ordinary people. She loves to see the awkward, self-conscious band geek get the captain of the football team and make him beg for it.
Website * Goodreads * Facebook * Twitter * Instagram
Author's Giveaway:
a Rafflecopter giveaway
Posted by CCAM at 8:30 AM

Intense cover! Sounds like a unique read and am looking forward to learning about her "rescuer"

Looking forward to starting the Black Reign series. Thank you