The sun, the moon, and the truth... Honorable Profession: A Novel of American Politics by Andy Kutler

This is a book about the toxicity and dysfunction in our current political system, and what hope we might have for the future. I drew large pieces of the story from my own past professional experience in the Secret Service and on Capitol Hill. (Andy Kutler)

Description:
Release Date: December 30th, 2021
A cynical, former federal agent in Las Vegas.
His idealistic daughter.
And the cutthroat world of presidential politics.
Honorable Profession: A Novel of American Politics is a compelling, hopeful story of a cynical former Secret Service agent and his idealistic daughter as they follow a longshot candidate into the perilous arena of presidential politics.
After resigning from his agency under an ethical cloud, 46-year-old Dan Cahill commits himself to rebuilding his relationship with Megan, the college-aged daughter in Las Vegas he has long neglected. She persuades a reluctant Cahill to join the student-led campaign of a popular professor competing in the Nevada presidential primary against impossible odds. As they face powerful forces conspiring to clear the field, Cahill's deep-seated disdain for electoral politics collides with Megan's higher ideals. Each of their faiths are tested by political allies and adversaries, all desperate for victory, no matter the costs.
Crafted by award-winning author Andy Kutler, Honorable Profession is an absorbing, modern-day political drama filled with authentic and indelible characters, each struggling with their own loyalties and principles as they duel with unscrupulous rivals and the meaning of public service.
EXCERPT
Her eyes were pleading. “You have to win next week. Let me help you.”
“You are helping me, Hope. And I appreciate your good intentions. Your passion to fix what ails your brother, desperate for any solution, I’ve been there. I know what that pain in your heart feels like. But I didn’t get into this race to destroy others. I never wanted to be in a competition among rivals and enemies. I wanted to be in a competition of ideas. Ours are better, that I am certain of. And if this election proves I’m the wrong messenger, I want to see an army of others, like you, who will carry our movement forward. And make the Cure Initiative a reality.”
Hope stood, unenthusiastic, but at least offering a grudging nod as she lifted her tripod again.
Walter smiled at her. “Your integrity, my dear, and my conscience, will remain intact. But fear not, the Vice President will one day learn the same inescapable lesson I am now experiencing.”
“What’s that?”
“As the Buddhists say, there are three things that cannot long stay hidden. The sun, the moon, and the truth.”
TOUR SCHEDULE
Goodreads ** Amazon ** Barnes&Noble 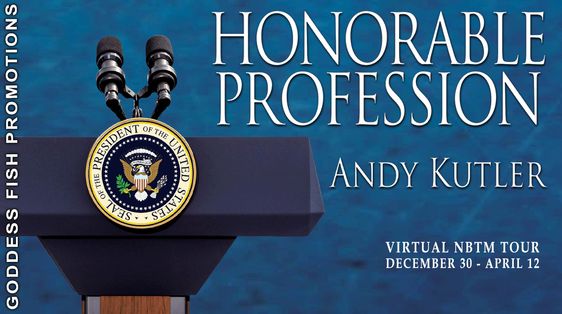 About the author:
Andy Kutler is a writer and author of two award-winning novels, The Batter’s Box and The Other Side of Life. Andy has also written extensively for The Huffington Post and The Milwaukee Journal Sentinel. Over a 28-year professional career, he has worked in the United States Senate, the U.S. Secret Service, and the national security community. A Wisconsin native, Andy lives with his wife and two children in Arlington, Virginia.
Website ** Goodreads ** Facebook ** Twitter
Author's Giveaway
the more you comment, the better your chances of winning
a Rafflecopter giveaway
Posted by CCAM at 10:53 AM

Happy Book Birthday, Andy, your book sounds like a very intriguing read and I like the cover! Good luck with your book and the tour! Thanks for sharing it with me and have a happy & successful New Year!

I love the beautiful cover and the excerpt. Thanks for the giveaway!

The excerpt is so great - enjoyed reading it!
Thank you for sharing this with us.

Do you ever hit road blocks when writing a book?

I hope you have a good night

I hope you had a smooth day

The book sounds very interesting. Thanks.

If you could tell your younger writing self anything, what would it be?

thank you for a chance to win :)

Did you ever consider writing under a pseudonym?

I hope you had a good day

keep up the great work

I hope your day is going amazing

Where do you get your ideas for writing?

Your book looks so cool

How did you decide on the cover for this book?

When did you first realize you wanted to be a writer?

What is your work schedule like when you're writing?

What, to you, are the most important elements of good writing?

What inspired the idea for your book?

I’m adding this to my to be read soon list.

When did you discover you have the gift of writing?

Do you reward yourself with something special when finishing a book?

Did you get a lot of encouragement when you decided to become an author?

Have you ever started a book that you decided not to finish?

Do you have a favorite author and/or genre?

Did you have any writing schooling?

I am adding this book to my read soon list!

Did you have a real life inspiration while developing Hope's character?

Love the beautiful cover and interesting to read

Congrats on your new book.

What age were you when you first started writing?