she disappeared - The Rebels of Caer City (Mara of the League #2) by Thomas M. Kane

"Thomas Kane’s novels are as enjoyable to read as they are intriguing and thought-provoking. I’m looking forward to reading the final book in the trilogy to find out how adult Mara brings this captivating story to a close." S.G. Minae, Goodreads 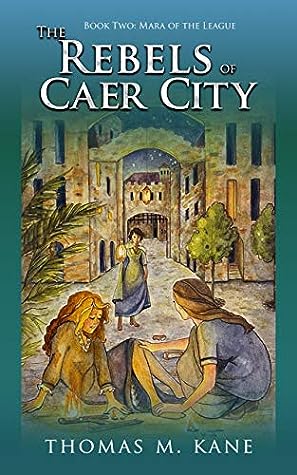 Throughout five years at a strict boarding school, Mara has turned to her friend Annie-Rose for comfort. Now Annie has disappeared. Mara teams up with two other students – bold Gretchen and soft-spoken Ginny -- to find her missing friend.

Together, Mara, Gretchen and Ginny take on a conspiracy involving some of the most dangerous people in their world.

Our school dresses were slate gray, at least there was that. No one walking by on the clifftops was likely to look down and spot us in the gloom. The sun was going down behind the cliffs, and shadows were reaching for the sea. A breaker swept toward us, crested, and fell back with a growl. My friends and I were, I noted with relief, the only people on the beach.
Despite the darkness, I felt exposed, hemmed in between the surf and the cliffsides. The path up the cliffs was at least a quarter of a mile behind us. Ahead, the stony shoreline stretched on for perhaps three more miles. And if we continued to the end of the beach, I thought, and rounded Turnbow Head, we would come to the Caer City docks. That was hardly the place for three seventeen-year-old St. Alexander’s girls to be after dark.
Gretchen led the way, splashing through a tidepool. Ginny hesitated. Then she lifted her skirts to her knees and followed. I took the rear, pausing occasionally to glance at the clifftops, and at our route back to the path.
“Here we are, people.” Gretchen stepped up on a seaworn boulder and faced us. Masses of seaweed clung to the stone beneath her feet. My father had been a sailor, and he once told me that the kind of seaweed grasping at our feet is called knotted wrack. I thought of knots, and of the rack. I was in that kind of mood.
Gretchen looked at me. “Well, Mara, you said you wanted to see the place for yourself. What do you think?”
All of us turned and gazed at the limestone precipice to our west. The cliffs rose to a peak a good two hundred feet above our heads. A lone tree stood at the top of the cliff, its leafless branches sloping back from the sea. The smell of knotted wrack hung in the air.
Ginny shuddered. “I don’t like it.”
“If Annie jumped here, that was the end of her.” Gretchen shook her head. “Holy, heavenly Belthor.”
“If she jumped here, it would have killed her.” I felt a horrible lump in my throat. “But . . . but look at that.” I turned my head to glance at the sea. “The water is a good twenty yards from the cliffside. And the tide was full when we got to the beach. Mistress Franklin said she jumped at dawn. The tide was out then—there’s an almanac in the school library—I checked.”
“So, what are you saying, girl?
“I’m saying there’s no way she would have ended up in the ocean. She would have hit the rocks, and the city watch would have found her body.”
“You say that girl—” Gretchen gazed at me for a moment. “Maybe she lay there for a while and the tide came in?”
“No. I mean, not if Headmistress Franklin told us the truth. The headmistress said the clamdiggers saw her while she was still alive. It was dawn then, and the watch started looking for her right afterward.”
“So . . . what do you think happened?” To my ears, Gretchen’s voice had taken on a needling tone.
“I have no idea.” I felt as if Gretchen had been trying to force me to confess that, and I was cross about having to gratify her. “But I think the headmistress lied to us. I think Pastor Avery lied to us. Everyone is lying to us—" 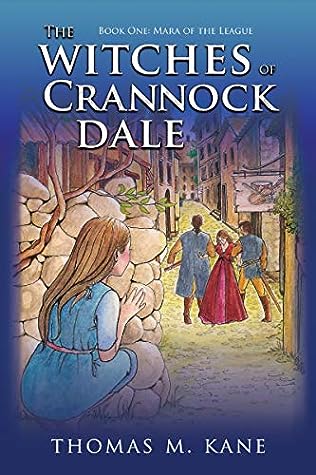 The Witches of Crannock Dale (#1)

When an enemy army threatens eleven-year old Mara’s home, she makes up her mind to save her family, one way or another. But when the knights protecting her village arrest her favorite aunt for witchcraft, she discovers that the difference between friend and foe may not be as obvious as she once thought.

This is a story of war and espionage, set in a low fantasy world. It is also about a child getting to know her mother and father in a new way.

A week and two days before my twelfth birthday, the church bell rang.
Up until then, it had seemed like a normal day. Mamma had told me to practice my arithmetic. At first, I shook my head so hard that my braids flew, but Mamma sighed at me the way she sighs at Pappy.
“Mara Elspeth Bennet, just yesterday your Grampy asked me whether you could divide, and I had to tell him no.” After that, I felt really small, so I let her write out some problems on my slate.
I took the slate and two pieces of chalk down Crannock Hill to Grampy’s mill pond and tried to make a start, but I hated division, so what I really did was sit on a big rock and smell the grass and watch the water turn golden in the late afternoon sun. Division doesn’t make sense to me. You have to figure out how many times one number goes into another, and there seems to come a time where you just have to guess. So, I dug the side of my slate with a fingernail and thought about other things. I thought mainly about justice. Most of the girls in Crannock Dale learned their letters and maybe sums
and that was enough. I was the only one who had to keep on with numbers, and I didn’t think it was fair.
Just because Pappy went to school in Caer City is no reason. Once, I remembered, I said that to Mamma.
Mamma told me I had a choice—if I didn’t learn arithmetic, I could grow up to be a farmhand’s wife. When Mamma says you have a choice, she means you don’t.
Another time, I complained about numbers to Pappy. He told me that the reason why I had to study things other children didn’t was that I was smart. I said I wished I was smart enough to get out of studying arithmetic. He said that would be metasmart. I think that’s a word he made up, but I like it.
Anyway, while I was thinking about those things, the bell donged. And it was Nurnsday. My first thought was to be glad because it wasn’t division, and maybe there would be some excitement. The bell was supposed to ring on Yisday. First, the people in Minton Pass were supposed to ring their bell, and when we heard it, we were supposed to ring ours. Then the people in Merryhock and Glenet Bridge were supposed to hear us, and they were supposed to ring their bells to warn the villages farther down the valley. That was how we practiced spreading the alarm, so we would know how to call for help
if the Pure Men of Waan attacked.
Once, when Pappy and Mamma and I were having dinner with Grampy, I said that if I was Queen of Waan, I would invade on a Yisday, so that when the bells rang, people would think it was just for practice. Everyone laughed, even my grandfather, as if it was a joke. I laughed too, because I was pleased to have the grown-ups listening to me, but I thought I really would.
Now I wouldn’t, because now I knew that queens aren’t important in Waan. No one told me that. I found out for myself. My uncle Tate bought a broadsheet pamphlet about Waanish depravities. It was full of words which I’m not supposed to say, but he forgot and left it on a chair when my mamma took me to his house for a visit.
While the grown-ups were talking, I read the parts of the broadsheet that were facing up. That’s how I learned that kings in Waan have lots of wives, and that they keep them locked up. They also have concubines and catamites, who count for even less. So, now I would never be on their side.
After the bell rang, there were a few minutes in which nothing seemed to have changed. The paddlewheel was still splashing around in the stream, and the same growling noise was still coming from inside the mill. Then I heard another faint chime. This one came from the hills behind me. That meant the Minton bell was ringing after ours, and that the alarm was spreading from south to north. And we never practiced like that, because Waan was north of us.
That was when I realized that something real was happening. And that was when I got scared.

About the author:
Thomas M. Kane is a fantasy author living high on a wooded hilltop. He taught international relations at a British university for close to twenty years and brings his insights concerning real-life war and politics into his fiction. He takes a character-based approach to writing, paying attention to his protagonists' personal relationships and inner lives.

Author's Giveaway
a Rafflecopter giveaway
Posted by CCAM at 7:16 PM

I would love to read this book and i like the cover too.

The covers reflect a medieval look quite well. It is very nice.