both hate the notion of marriage... An Unsuitable Lady for a Lord (Scottish Lords and Ladies #1) by Cathleen Ross

"This is a new author to me & I thoroughly enjoyed this fun, entertaining read of two people who were so right for each other fighting the inevitable. [...] A captivating read & I’ll certainly read more from the author." Janet, Goodreads 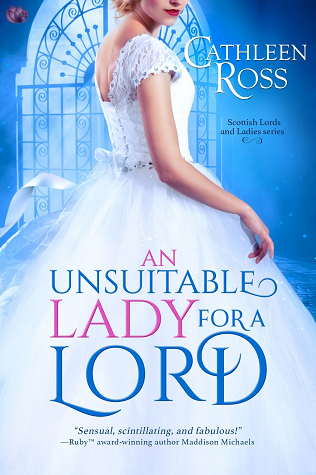 Lord Aaron Lyle has one hell of a choice: a bankrupt dukedom, or marriage to some simpering society miss so his spendthrift father can get his hands on her huge dowry. He won't do it. He has a reputation to maintain, and besides, he'd rather run naked through the streets of London than marry anyone at all. Surely, there must be a third option.

Then Lady Crystal Wilding walks into his life, a bluestocking, full of subversive thoughts, who hates the notion of marriage even more than he does. He is intrigued…and, suddenly, he has an idea. He invites the totally unsuitable lady home on the pretext of presenting her as a possible match…but in truth, Aaron has something far more pleasurable in mind. For her part, Lady Crystal has her own reasons for going along with his harebrained scheme.

Imagine their shock when his highly proper family loves her and starts planning the wedding. Good lord. Now what?

This scene was changed because my editor thought a woman discussing “Free Love” was too much for the period. Regency 1811. A lady had to be married before she had sex and men didn’t realize or think that women felt desire. How things have changed.

It’s also dear to my heart because when I was tracing my family history back to Scotland, I discovered the first Earl of the Ross clan, cleaved off the heads of the king’s enemies and took them to the king. He was made an earl for his trouble. It’s a charming lot I’m descended from.

Sir Walter waved his arm in a grand manner toward her. "Ladies and gentlemen, tonight I want to introduce you to Lady Crystal Wilding who is here to talk about reform for women." A collective groan filled the air from the gentlemen in the front rows, who had perhaps been expecting a more diverting subject.

Aaron plunged his hand in his pocket finding the rare gold noble coin he kept for luck and clenched it with anticipation. He'd heard about Lady Crystal's modern ideas and he wanted to experience this exciting termagant for himself.

Sir Walter frowned as he looked around the room. "Patience, gentlemen. Keep your minds awake and your desires asleep for this is a salon for ideas and for literature. I assure you, Lady Crystal will not disappoint, which is why I invited her to speak. Her views are most enlightening." He nodded at Crystal.
The lady raised her chin and observed the audience for a moment. "Thank you for coming to listen to me tonight. I'm here to talk to you about the subject of freedom, specifically the subject of free love."
He heard the collective, sharp hiss of breath and grinned at the provocative statement. "Thank you, God in heaven." He rubbed the gold noble between his forefinger and thumb.

Lady Crystal beheld the gathering with challenging bright sea-green eyes. "For too long, chastity has been seen as a virtue thanks to strict Scottish Presbyterian and even Catholic controls. Instead, I urge you to consider letting men and women love without the restrictive covenant of marriage, which binds people together in misery for life."

"Aye, lassie, couldn't have said it better myself." A gray-haired lord sitting at the front raised his whisky glass to toast her until the elderly lady sitting next to him, presumably his wife, hit him on the head with her large Spanish fan.

"Free love? Whoever heard the like? Is this woman a hoor?" William's shocked expression made him chuckle. "She has not the look of a doxy."

"A hoor? No. She's one of the highland Wilding sisters who can trace their lineage back to King Malcolm. Her ancestor cleaved the heads off the king's enemies and received an earldom and the king's sister in marriage. I find her ideas diverting. Perhaps it is time society thought differently."

About the author:
Cathleen Ross is a quirky writer who lives on Sydney Harbor with her husband, daughter and very loved dog, Denzel. As an English teacher and editor, she has always surrounded herself with books. When she's not giving psychic predictions for her family and friends, she's writing romances where her heroines always get their man. She's a multi-award-winning author who regularly hits the Amazon best-seller lists.

a Rafflecopter giveaway
Posted by CCAM at 5:30 PM

She is wearing a beautiful gown on this cover

Beautiful cover, thanks for sharing!

Love the cover, makes me want to read it and dive right in!

Thank you for telling me about this book

beautiful cover, thanks for hosting

Such a gorgeous cover!!

The cover is beautiful.

I love the cover, beautiful dress.

I love the cover and the book sounds great.

The book looks delightful. Thanks for the giveaway!

Awesome dress on the cover! It is absolutely gorgeous.