Magic and mayhem are his middle names... Abracadabra by K. Stevens

Rod's a trickster by trade, magician by hobby, and thief by night. But when an old friend hunts him down and asks a favor, he can't refuse. Mostly because she'll likely try to kill him before asking again. 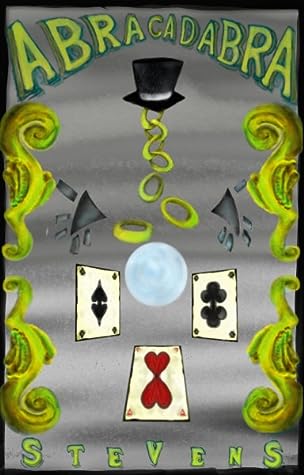 Magic and mayhem are his middle names. Figuratively. Not literally. He's not sure he even has a middle name, let alone two.

Rod's a trickster by trade, magician by hobby, and thief by night. But when an old friend hunts him down and asks a favor, he can't refuse. Mostly because she'll likely try to kill him before asking again. But also because it presents a very interesting puzzle: to hunt down what a half-elf, magic weapons, and a killer-led cult of shapeshifters have to do with each other.

Lucky for him, Rod has the ability to be in three places at once. The problem? Even he can't always tell which him is the real him.

The roads were wide tracks in the ground, the ground around the edges of each hut a trampled mess of sticky mud. Woven grass mats were laid in the middle of the messes, probably to increase traction despite the mud reaching through any holes available.
I followed the beaten path to the closest cluster of buildings, finding my way to a building with a crudely-constructed porch made of logs forced into place among the mud. The sounds of community drifted through a makeshift curtain of thick leaves covering the entrance. A pair of pale, hollow-eyed elves walked past, keeping their heads down as they pushed past the leaves and made their way into the building.
Judging by the many muddy tracks on the makeshift porch, this place was where the elves gathered. Or at least, one of them. Might as well start asking question and see what I could see.
I went to the curtain and attempted to brush it aside. My hand passed through the leaves instead. I pondered it for a second before snorting to myself; of course. Of course I can’t interact with things. I pushed past the curtains and entered the hub.

About the author:
From an early age, K. Stevens devoured all things magical and mystical. To this day, she hesitantly struggles to keep one foot in reality while the rest of her remains firmly rooted in the fantastic and insane. In 2015, she finally worked up enough courage to share her stories with more than just her family, and was encouraged by the fact that she wasn’t eaten alive for it. She may be the crazy lady that talks to bugs and stares incessantly into the sky, but don’t mind her. She’s just thinking.

I like the cover. It has great colors and graphics.

Magic is awesome! The colors make the cover pop.

I really like the cover! It def draws me in. Thank you

The cover is very imaginative.

I would find the book an engrossing read. There's some interesting ideas.

Use of magic in mayhem sounds explosive. Can't wait to read it.