for the man she loves - A Struggle for Independence by p.m.terrell

Sometimes a woman comes to the realization that she has built the perfect life but with the wrong man. 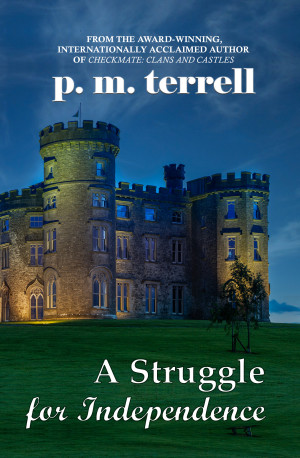 Sometimes a woman comes to the realization that she has built the perfect life but with the wrong man.

It is 1916 Ireland, and Independence Mather has settled into a tedious routine in an arranged marriage when she meets an architect hired to add a wing onto her husband’s vast estate. She soon falls in love with the charming, attentive Nicky Bowers, but he has secrets to hide. When she discovers he is an Irish rebel, events propel her into the middle of the Easter Rising.

Now she must decide whether to remain the wife of a British loyalist or risk everything to join the rebellion and be with the man she loves.

We might be living in the 21st century, but arranged marriages continue to remain the norm in various cultures around the world. In earlier times, an individual on one’s own stood a much lower chance of survival than one that existed within a family or community structure. When women, for example, are prohibited from meaningful work outside the home, they are dependent upon their fathers and later, their husbands, for their survival.

A Struggle for Independence takes place in 1916, Ireland. It opens with Independence Mather, better known as Penny, in a loveless, arranged marriage. Like many women of her day, her parents plotted a future for her that they hoped would ensure financial security. Emotional needs were routinely discarded as frivolous because adequate food, shelter, and clothing were primary concerns in the art of survival. For those in upper classes, twists of fate could render a family destitute or penniless even though they might descend from royalty or ancestors with vast estates.

This is the situation in which Penny has found herself. Her parents had a name that should have theoretically opened doors, and yet through her father’s questionable investments, they have found themselves in dire financial straits. To ensure Penny’s economic future, they have married her off to a man she could never love.

Yet when her friend Elisa suggests that she find a lover, she is mortified. Her strict moral upbringing stands in the way of her emotional, mental, and sexual fulfillment. She balks at Elisa’s suggestion that most women in her circumstances find solace elsewhere even while remaining married. It takes a charming and attentive architect, Nicky Bowers, to turn her head and cause her to consider the unthinkable.

The struggle for Penny comes in how she views herself and her future. She can remain part of the upper-crust society with all the material trappings and comforts, or she can follow her heart to an uncertain future. When she discovers that Nicky is plotting to overthrow Britain’s hold on Ireland during a rebellion that becomes known as the Easter Rising, her decision becomes far more complicated. World War I is raging, Irish rebels are outmanned and outmaneuvered by British military forces, and a sovereign Ireland is far from assured.

It becomes more than leaving one man for another as her beliefs and loyalties are put to the test. Having tasted freedom and true love, she knows if she chooses to remain a loyal British subject, she could experience the emptiness of a loveless marriage for the rest of her life. If she chooses Nicky and the rebellion fails, she could be imprisoned or executed for treason.

About the author:
p.m.terrell is the pen name for Patricia McClelland Terrell, the award-winning, internationally acclaimed author of more than 24 books in multiple genres, including contemporary suspense, historical suspense, computer instructional, non-fiction and children’s books.

Prior to writing full-time, she founded two computer companies in the Washington, DC Metropolitan Area: McClelland Enterprises, Inc. and Continental Software Development Corporation. Among her clients were the Central Intelligence Agency, United States Secret Service, U.S. Information Agency, and Department of Defense. Her specialties were in the detection of white collar computer crimes and computer intelligence.

A full-time author since 2002, Black Swamp Mysteries was her first series, inspired by the success of Exit 22, released in 2008. Vicki’s Key was a top five finalist in the 2012 International Book Awards and 2012 USA Book Awards nominee, and The Pendulum Files was a national finalist for the Best Cover of the Year in 2014. Her second series, Ryan O’Clery Suspense, is also award-winning. The Tempest Murders (Book 1) was one of four finalists in the 2013 International Book Awards, cross-genre category. Her historical suspense, River Passage, was a 2010 Best Fiction and Drama Winner. It was determined to be so historically accurate that a copy of the book resides at the Nashville Government Metropolitan Archives in Nashville, Tennessee. Songbirds are Free is her bestselling book to date; it is inspired by the true story of Mary Neely, who was captured in 1780 by Shawnee warriors near Fort Nashborough (now Nashville, TN).

She was the co-founder of The Book ‘Em Foundation, an organization committed to raising public awareness of the correlation between high crime rates and high illiteracy rates. She was the founder of Book ‘Em North Carolina, an annual event held in the town of Lumberton, North Carolina, to raise funds to increase literacy and reduce crime and served as its chairperson and organizer for its first four years. She also served on the boards of the Friends of the Robeson County (NC) Public Library, the Robeson County (NC) Arts Council, Virginia Crime Stoppers and became the first female president of the Chesterfield County-Colonial Heights Crime Solvers in Virginia.

For more information, book trailers, excerpts and more visit the author’s website at

the more you comment, the better your chances of winning
a Rafflecopter giveaway
Posted by CCAM at 7:30 PM

Sounds very good, thanks for sharing!

I would love to investigate that castle.

Thank you for hosting me here today. I'll be checking in later and answering any questions anyone might have for me. And I have one for you: what is your opinion of arranged marriages?

Thank you all for your comments, Dale, Rita, Katie, and Victoria! Katie,I agree. I am thrilled that the owners of the castle gave permission to use the photograph on the book cover and in the trailer. They are currently restoring it to its original glory.

Your book sounds like a great read and thank you for sharing it with us.

Thank you, James and Susan! I've been very excited about the cover. Thanks for commenting on it. I hope you both will give the book a try.

Sounds very awesome! Love the castle on the book cover. Thanks for the opportunity to win

Thank you for the comments, Wendy and Sandy! I'm glad you enjoyed the cover and excerpt.

I love the cover. The castle photo is awesome!

Thank you, Abfantom. The owner was very gracious in allowing us to use the photo on the cover. He is restoring the castle to its original grandeur. The photographer is Willie Forde, based in Ireland.

This sounds like one amazing read.. The castle is phenomenal.. 💕

Great looking cover! Thanks for the giveaway!

Love the excerpt. This sounds like an existing book.

Thank you, JS22! Good luck in the giveaway!

I agree, Mya! The castle is absolutely amazing. I'm grateful to the owners for allowing me to use this picture on the cover and in the book trailer, and to Willie Forde of Ireland for taking it.

The cover is beautiful and the story sounds interesting.

I love the cover and think the book sounds good.

Thank you, everyone, for stopping by and leaving a comment. It's been wonderful to receive so many comments about the cover and the beautiful castle. I appreciate all of you that have expressed interest in reading the book. It's what keeps me writing, and affords me the privilege of doing what I love!

The book sounds very interesting. Thanks for the giveaway!

Love the cover and would love to read it too.

Love the cover.. so dramatic and pretty...

I hope everyone is having a great Easter.

Thanks again for the giveaway!

I hope everyone is having a great week.

It's the weekend! Now what/

I would enjoy this book! The cover looks really awesome. I appreciate the opportunity to win

Thank you for all the positive comments, everyone! I hope you'll read the book. Thank you also for the feedback on the cover. I'm so fortunate that Willie Forde of Ireland allowed me to use this photograph he took of Killua Castle in County Westmeath, and the owners gave permission to use it on the cover and in the book trailer. I hope you all enjoy reading the book!