a deadly game - Treasure Fever: The Hunt For El Dorado by James B. McPike

A brilliant blend of Dan Brown and National Treasure, McPike's latest is the escape you need in today's world. Put down your tired thriller and adventure fiction, because much like El Dorado, a real goldmine of a book is waiting for you in Treasure Fever." --Red City Review (5-stars) 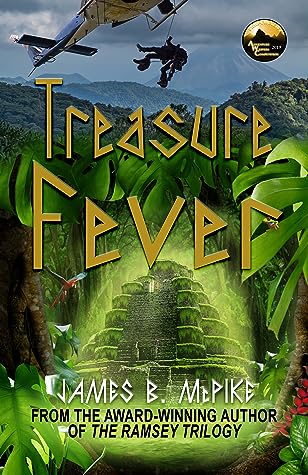 Max Finley is an American spy tasked with tracking down an old flame responsible for the theft of a rare 16th-century manuscript from Spain. Little does he know but she's hot on the trail of finding the long-lost city of El Dorado.

A place of magnificent gold wealth left by the Inca Empire and pursued for centuries by treasure hunters around the world. But it’s also rumored to be cursed after disastrous expeditions were lost and explorers tragically perished.

As Finley reluctantly joins her quest, he finds himself mixed up in a deadly game of international espionage and intrigue where the powers that be will do anything to stop him.

"The character development is ingenious...there is a sort of James Bond-ish ending which is absolutely delightful." --Literary Titan

About the author:
Treasure Fever is McPike’s sixth novel. He wrote an acclaimed trilogy about an Israeli investigator on a mission to solve biblical mysteries before that. His books have been the recipients of numerous literary awards, including the Pacific Book Award and the Beverly Hills Book Award for The Lost Prophet. He lives near Yosemite, California and is a member of the International Thriller Writers.

Author's Giveaway
a Rafflecopter giveaway
Posted by CCAM at 4:30 PM

As a James Bond FREAK.. I love the sound of this.. I am in love with spies and espionage. Sounds super good!!!

My grandsons would enjoy this book

I like the cover. It has awesome graphics and colors that are very attention grabbing.

Love the bright colors of the cover!

Can't wait for that James Bondish ending! The cover picture is awesome.

I think the colors used on the cover are very attention grabbing and I am drawn to them. The description sounds very interesting to read.