When two worlds collide... Out of the Blue by Stephanie Rose Bird

Out of the Blue is a young-adult, coming-of-age novel that seamlessly bridges elements of African American folklore and spirituality with Greek mythology. 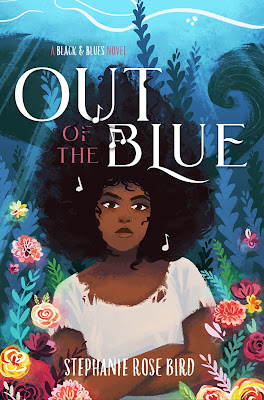 When two worlds collide, only one girl can unravel the mythical threads and save her father’s life. . .

Bobby “The Shrimp Man” Daniels, a blues singer and shrimper from Mobile, lies unconscious in a hospital bed, suffering from a mysterious illness. His daughter Tina, a sheltered sixteen year old, torn between her love for her father, and her disappointment in his relationship with Kyane, his much younger mistress, is determined to heal her father, no matter the cost.

Kyane isn’t just a mistress, she’s a Siren, obsessed with her overwhelming desire to become human and merge her otherworldly singing voice with Bobby’s incredible music. She’ll do anything to get what she wants, annihilating anything, and anyone who stands in her way.

In order to save her father, Tina will have to travel to the Kyane’s world, a world of strange and magical creatures, and figure out how to wrestle his soul from the Siren’s control. As Tina’s magical journey twists and turns, she’ll learn what it means to be a woman and what it means to save not only her father, but herself.

Out of the Blue is a young-adult, coming-of-age novel that seamlessly bridges elements of African American folklore and spirituality and Greek mythology.

African Mythology is quite distinct from Greek Mythology but I thought it would be quite entertaining to bring together elements of African American Spirituality and folklore, with Greek Mythology in my debut novel, “Out of the Blue.” In “Out of the Blue” I had fun exploring topics that I have engaged with in my nonfiction books such as “Sticks, Stones, Roots and Bones” and “365 Days of Hoodoo,” such as Hoodoo. I also explored the healing of the African diaspora and touched upon midwifery, similarly to the way I discussed these topics in “A Healing Grove” and “The Big Book of Soul.” I have also written quite a bit about God and Goddess-lore as a columnist in the past for “Sage Woman.” Fiction afforded the opportunity to bring all of these lovely topics into a complex and far-ranging story.

In case you’re unfamiliar, Hoodoo is an American tradition, inspired by West African and other practices, centered around folkloric practice. One of the hallmark objects of Hoodoo, is a collection of magickal objects contain in a flannel. It is called a mojo bag. A mojo bag particular to women is called a nation sack and it is something of a side character in “Out of the Blue.” One of the characters in the novel is a practitioner of Hoodoo, while her sister is intuitive. There are also deeply Christian characters from the African Episcopal Church (A.M.E. church), making for a rich plot through bringing these disparate beliefs all together into a single story.

Thickening the plot further, there is the introduction of the world of Greek Mythology. I understand that ancient Greece was a melting pot, bringing the best and brightest together from the Mediterranean and parts of Africa and portray that world as such. The antagonist of the story is a Siren, from a family of equally talented Siren singers. Many other types of creatures known in Greek mythology make appearances throughout the story, as the protagonist has one foot in Mobile, Alabama and another in an island of Ancient Greece.

One of my ideas of bringing together African American culture with Ancient Greece mythology is to help my young black readers and other people of color, as well as Indigenous people, feel as though they too are stakeholders and participants in these age-old stories—indeed, we all are. Mythology knows no boundaries. People around the world have folklore and mythology that are both distinctive of their culture and that can be related to other cultures far and wide.

About the author:
Stephanie Rose Bird is the author of the critically acclaimed and award-winning, “Sticks, Stones, Roots and Bones: Hoodoo Mojo and Conjuring with Herbs.” Her other books include: “365 Days of Hoodoo,” and “Four Seasons of Mojo,” all three were published by Llewellyn Worldwide. Bird also contributes to Llewellyn Spell-a-Day,” “Llewellyn Herbal Almanac” and “Llewellyn Magical Almanac.” She is the author of: “Earth Mama Spiritual Guide to Weight-loss” (Green Magic Publishing), “A Healing Grove” (Lawrence Hill Books), “The Big Book of Soul,” (Red Wheel Weiser/Hampton Roads Publishers) and “Light, Bright and Damned Near White: Biracial and Triracial Culture in America and Beyond.” (ABC-Clio).

She is a novelist, published by One Odd Bird Press, in the Young Adult Fantasy and Magical Realism genres. “Out of the Blue” is her debut novel in the Black and Blues Series. One Odd Bird Press will also publish “Pine Barren Blues.” She writes and paints where she lives (Chicagoland) with her husband, near her children, and along with some very busy animal friends.

Thanks for sharing my debut novel!

Thanks for the opportunity to win!

The cover art is gorgeous and the premise of the novel is unique and sounds like a beautiful read. Best wishes to the author on her debut novel.