A capricious tale of gods... Big Cranky: Fall Into Darkness by James Pyne

"Storytelling at its finest
From start to finish I was enthralled. I had to fight to put the book down I was so captivated." Corey Baird, Amazon 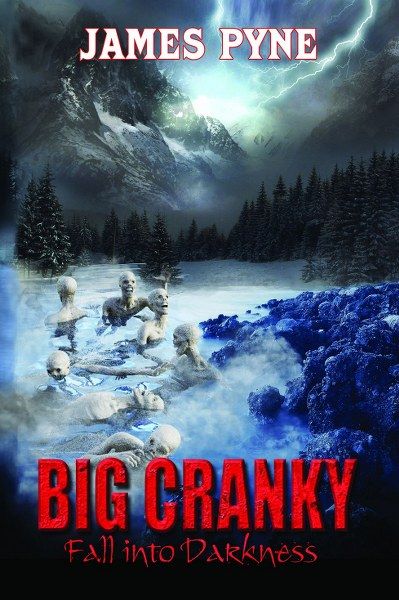 Forget everything you think you know about myths and legends, James Pyne’s Big Cranky connects them all in an epic web of deceitful betrayal, love, and loyalty.

A capricious tale of gods, showing human quirks are not only wasted on the mortals. A tale of many deities treading lightly around a superior as the world begins.

Hercules wasn't dumb. He just saw no point in a lot of things. He agreed with his father's philosophy, regardless of ability or creed, all were cut from the same energy, some more blessed than others, that is all. But then his dad had to go all hypocritical with his desire to become the Supreme Being of all Things. The other thing Hercules inherited from his father was his super ego, and if challenged, he damn well would prove the doubters wrong.

"Thank you for the gift, mother," Hercules said to Hera who hated when he called her mother. He stood within the Coliseum with the rest of the Nephilim standing at attention behind him. He was dressed in the golden hide of the Nemean Lion, its skin impregnable to most weapons wielded by a mortal and immortal. Hercules had knocked it out with his spiked club and proceeded to cut the lion's skin off with its own claws. The upper part of its head was still attached to the hide and served as Hercules new helmet, the lions two front fangs rested on his forehead, keeping the helmet and hide in place.

"These tasks are tiresome." Hercules stood in the arena waiting for the next challenge. Hera and Zeus sat within their exaggerated thrones. He had already completed ten of the labors, some were pointless, like cleaning out the filth of a cattle stable, which was supposed to humble him, but instead, he out-thought Hera and with a few pounds of a fist on solid ground, created a brief detour for a river that washed out the stable for him. Without a doubt, resisting the sexual whims of nymphs was his most challenging task so far.

"You're still arrogant as ever," Hera said, in black armor. Which she only wore during battle. This was the first time she had dressed like this in his presence. A clear message to him. One he welcomed.

"You're inflating my ego, mother, with these lame tasks." Hercules crossed his arms over his chest. "Not grounding it. Maybe we should do battle and forget the remaining two tasks."

"Insolent —" Hera jumped from her throne and before Zeus could pull her back, she dove at Hercules with her wings shooting out from her back. She snatched Hercules and before he could swat her with his club or free fist, her touch weakened him. She carried him to the clouds, then dropped him from the top of Mount Olympus but not before pulling his lion armor from him. He cursed her all the way down, following him just out of reach of his club-swings. He landed hard on a field of tall grass, sending dirt flying up.

Hera landed next to him; her wings wrapped around parts of her body like a second armor. She tossed his lion armor to him, crossing her arms over her chest, grinning...

About the author:
James Pyne hails from Nova Scotia, Canada, and has been a scribe for the Universe much of his life. He's a firm believer in being able to write in every genre, to make his world building and characters hopefuly come out genuine. No matter what he writes it will have some form of darkness, nothing is pure light in any worlds James creates and rumor has it, his surviving characters are plotting his demise. When it comes to his past time, much of it is spent learning the craft, but he does enjoy gardening and playfully tormenting those he loves. When he's not writing, or working his day job, he's traveling. The Andalusia region of Spain the last place that tolerated him.

a Rafflecopter giveaway
Posted by CCAM at 8:30 PM

This looks like it could be an engrossing read.

This looks like it could be an awesome read!

Forgot to say, I love the cover

I love the cover. It has awesome colors and graphics.

Sounds like a great book. I'm looking forward to reading it.

The cover looks good and it sounds like an interesting story.

My daughter woud enjoy this book

The book cover looks great. This sounds like a great mythological adventure.

Great trailer, thanks for sharing!

The cover is very captivating and draws you in to figure out what you are really seeing.

This is one of the freakiest covers I've ever seen.

The cover is interesting!! Very different - The colors would catch my eye!

This looks like it's going to be a good read!