[T]his isn’t a movie. Confusion, friendship, and love won’t guarantee a happy ending unless Justin can learn to accept himself for who he truly is. Hair bands and all. 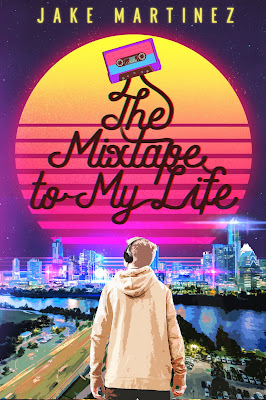 Justin Ortega might as well be starring in his very own coming-of-age 80s movie. If only he could find his dream boy to pull up in front of his house in a red convertible and sweep him off his feet, already! At seventeen years young, he isn’t quite Mexican enough for his South Texas town; isn’t manly enough for his father; can sometimes be too much of a smart mouth for his mother; and as for the other kids at school—let’s just say he’d be cast as the quiet nerd with a heart of gold…and an ear for music.

The one solace Justin has is his love of 80s hair metal bands, which he listens to on his beloved Sony Walkman. The songs, lyrics, and melody keep him just sane enough to escape the pressures of school and help navigate the hurdles life brings. Especially with the doozy this year is shaping up to be. Not only does he have to try out for a captain position which is rightfully his, but his best friend has found a new girlfriend, leaving Justin to fend for himself in a school where he’s mostly known as simply Coconut.

Enter Dominic Mendoza. Sweet, funny, and a blast from his past, the hunky football player has moved in next door. Justin could never forget how Dominic protected him in the eighth grade, nor the way Dominic made him feel, then…and now.

Except, this isn’t a movie. Confusion, friendship, and love won’t guarantee a happy ending unless Justin can learn to accept himself for who he truly is. Hair bands and all.

“Justin, you could at least try to smile.”
The words make me want to leave my lips, but I know that they will probably be my last. My mom is not particularly fond of my type of humor, though I could swear that I get it from her. I force my face to make a smile and hope that it will be enough.
“There, was that so hard?” Mom smiles while messing with my hair. She is the only person I allow to do that.
Yes, yes it was that hard. Smiling isn’t something that feels natural to me. Not that it doesn’t happen; it just feels weird when it does.
Especially since I am being dropped off at band camp. No, not the fun, hormone-filled kind in the woods. I truly believe they modeled Hell after this one. Two weeks of being yelled at by the Garza High School band directors, bullied by the other drummers, and then there was that reliable South Texas August heat. It’s a required thing. Most schools in the Rio Grande Valley (maybe other places, but I wouldn’t know) use these two weeks to get a jump on the season in order to get their half-time shows off the ground for the upcoming marching competition. The goal is to make it all the way to State, which is why we march in the grueling sun all these days. Now that I think of it, pure hell might not be strong enough to describe it when the temps reach higher than one-hundred degrees.
We aren’t the only ones either; the football players also have their own camp that they need to go to as well. Texas takes their football very seriously.
It isn’t that camp is physically demanding or anything like that. Even my chubby self can handle the marching and carrying of the equipment. If anything, it’s the people.
I used to love playing percussion when I started in the sixth grade. Seventh and eighth grade were even better. Band was my escape from the pain of having to be in football. I looked forward to it every day.
It wasn’t until I started my first day as a freshman that it all went downhill fast. I cringe every time I think about it.
“You know you could quit if you want to, mijo.” Mom was always telling me that. She would have preferred I do something else, namely football or baseball. Though she loves to think that she and my dad are opposites, they are more alike than either allow themselves to believe.
“Yeah, I know. But I’m doing this for college.” That is partially right. My extracurriculars need beefing up and staying in band will help. It also doesn’t hurt that the fall portion of band counts as a P.E. credit, and this year will be the last one. I am willing to suffer through another year in order to avoid the horror that is the boy’s locker room ever again.
There’s a fag in the bathroom!
Donde?
There!
“You are such a viejito sometimes. You need to learn how to have fun.”
Viejito. It means old man. She called me that a lot. Ever since I could remember, my mom always referred to me as an old man. To me it felt natural, but to her I needed to look and sound more like a kid. That’s the weird thing about Spanish. We have a lot of words that sound like insults, but can sometimes be endearing.
I don’t say a word, and Mom decides to skip the rest of the “these are the best years of your life” speech.
“Are you going to walk home, or should I pick you up?” Even though she can be tough as nails, my mother, Mary Ortega, has the most loving eyes I have ever seen on anyone. Well, almost anyone. There was one other.
Those fabulous green eyes. The ones that made me melt in the eighth grade every time I saw them. The ones I also wished I had. Ha! I was green with envy for them.
My mom’s eyes made you feel safe and could speak volumes when words fail to convey their proper meaning. I always appreciated that.
“I’ll probably just get a ride with Benny.”
“Hmm.” That’s all she replies with. Her eyes sure shift quickly at the mere mention of Benny’s name. I never understood why she doesn’t like Benny. He had been the only real friend I’ve ever had since I met him two years ago. Yeah, he’s loud and says things that shouldn’t be said, but I can count on him when the chips are down. He is also the only one who knows my secret.

About the author:
Jake Martinez is a former South Texas resident who has found a new home in Chicago. He has been writing all his life but has only recently sought to be published. His debut novel, The Mixtape to My Life, reflects on life as a gay teen growing up in South Texas. Jake holds an MFA in Creative Writing and also loves to write plays and screenplays. Aside from writing, you can find him hanging out at home with his husband, their toddler son, and an eclectic group of fur babies.

Author's Giveaway
a Rafflecopter giveaway
Posted by CCAM at 2:16 PM

Sounds like a coming of age book great for YA readers.

I love the cover. It has awesome colors!

Eye-Catching and beautiful.. This sounds SO awesome!

The cover is outstanding and I'm sure readers will enjoy your book. Best wishes to the author on the new release.

Thank you for hosting this giveaway. A time to do a lot of reading Rosanne rosans4comcast(dot)net

Sounds like an awesome coming of age book! The cover colors are beautiful.